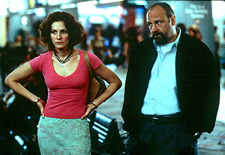 Chinmayi Sirsi / fullhyd.com
EDITOR RATING
6.0
Performances
Script
Music/Soundtrack
Visuals
NA
NA
NA
NA
Suggestions
Can watch again
NA
Good for kids
NA
Good for dates
NA
Wait for OTT
NA
In an industry that often feeds off on its personalities, any movie that stars Julia Roberts and Brad Pitt is bound to command and receive a lot of attention. But the fact that, over the years, audiences have rejected movies which run solely on star power as often as they have accepted and enjoyed them tells filmmakers that they can never get too smug - not even if they can get everybody who is somebody in Hollywood to star together in one giant movie.

As for The Mexican, it is no giant movie at all. In fact, it is rather ordinary and tends to get on your nerves at times. Gore Verbinski, who directed Mouse Hunt, tries hard to gel comedy and drama together to get what he must have hoped would be an entertaining movie. To be fair, The Mexican manages to make you smile at times. But only at times.

Jerry (Brad Pitt) works for some kind of don, and manages to goof up the simplest of jobs. When he goofs up on the latest, that was also supposed to have been his last, he is sent to Mexico for another - to bring back a valuable pistol. Jerry's girlfriend Samantha (Julia Roberts), who wants to be a waitress (and eventually an actress) in Las Vegas, gets wild at his having to leave, and breaks up with him. The break-up scene is one of the best in the movie, with Roberts mouthing typical dialogues from those typically American self-help relationship-guides: "I need you to acknowledge..."

As for Jerry, he really has no choice but to land himself up in Mexico, where life gets even worse. The pistol that he needs to deliver is an extremely valuable jeweled beauty called the Mexican, and just as Jerry lays his hands on it, he is hit by strokes of bad luck from all directions, including a particularly bad stroke which parts him and the pistol. Jerry has no choice, of course, but to chase after it.

Meanwhile, Samantha (reading a book called "Men Who Can't Love") is kidnapped and held hostage so Jerry doesn't play hanky-panky. The kidnapping is done in a very un-Hollywoodish manner, and is rather shocking in its frivolity. She gets pally with the kidnapper, a balding, rather weepy gay with a fondness for serious talks and false identities.

Jerry's chase leads him to find and lose the pistol a number of times, and he hears different versions of the legend of the Mexican, a changing tale about the maker's daughter and her suitors. Again, the curious and rather dysfunctional mix of comedy and drama mar the picture. The portrayal of the legend makes you wonder if you are, in fact, watching a parody, but you can't be too sure.

Roberts and Pitt don't have a whole lot to do on the performing front, which is a big mistake on Verbinski's part. The few scenes they have together hardly have any chemistry. Finally, The Mexican is the kind of movie that one would call "time-pass" except that time passes rather slowing at times.

But like I said before, it does make you smile a bit. Relative to the kind of fare we Hyderabadis have been fed in the past few weeks, though, The Mexican is not terrible, and is certainly worth a watch.
Share. Save. Connect.
Tweet
THE MEXICAN SNAPSHOT

ADVERTISEMENT
This page was tagged for
The Mexican english movie
The Mexican reviews
release date
Brad Pitt, Julia Roberts
theatres list
Follow @fullhyderabad
Follow fullhyd.com on
About Hyderabad
The Hyderabad Community
Improve fullhyd.com
More
Our Other Local Guides
Our other sites
© Copyright 1999-2009 LRR Technologies (Hyderabad), Pvt Ltd. All rights reserved. fullhyd, fullhyderabad, Welcome To The Neighbourhood are trademarks of LRR Technologies (Hyderabad) Pvt Ltd. The textual, graphic, audio and audiovisual material in this site is protected by copyright law. You may not copy, distribute, or use this material except as necessary for your personal, non-commercial use. Any trademarks are the properties of their respective owners. More on Hyderabad, India. Jobs in Hyderabad.