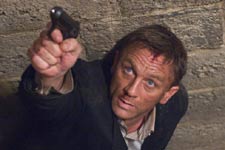 Kritika Deval / fullhyd.com
EDITOR RATING
7.0
Performances
Script
Music/Soundtrack
Visuals
8.0
7.0
9.0
8.0
Suggestions
Can watch again
Yes
Good for kids
No
Good for dates
Yes
Wait for OTT
No
"Skyfall is where we start, a thousand miles and poles apart, where worlds collide and days are dark. You may have my number, you can take my name, but you'll never have my heart," Adele's smoky voice sets the dark, brooding tone for the rest of the movie.

It's been 50 years since the first laconically powerful introduction of "Bond, James Bond" took place. And Skyfall knows it. Even as the sepia tints of nostalgia color much of what is happening on screen, the movie has this spirit of moving forward, of stepping into the brave new present, that heralds an interesting beginning to the future of the franchise.

A process that began with the stepping of craggy Daniel Craig into Bond's shiny shoes, the humanization of Bond is something that was observed warily, and met with a lot of criticism. Craggy Craig (see what we did there?) may not have the gimmick-ridden slickness of Roger Moore or Pierce Brosnan, but what his version of the cool-as-a-cucumber killing machine wears like a plush mantle is the knowledge that every death at his hand takes away a piece of his soul.

Now 50 years old, Bond is back from a long vacation as he finds MI6 under attack. M (Judi Dench, as magnificent as ever) is facing serious flak over "clinging to the grand old times of espionage". The new Q is a young, pimply computer genius who claims to be able to "do more damage on [his] laptop sitting in [his] pajamas". An old ghost, Raoul Silva (Javier Bardem) is back to haunt them all, playing havoc with MI6 from his computers. He's crazy, ruthless, and has a bone to pick with M.

The danger is the same as before, but different. Because, in the 21st century, the enemies of England aren't cut and defined as they were earlier. And, 007, battle-scarred and slightly off his game, has to save the world, be "the old dog learning new tricks". So, off he goes through the usual breathtaking chases in equally breathtaking locales (Istanbul, Shanghai, the London underground, Scotland??â‚¬Â¦), picking off enemies, flirting with gorgeous women, and performing heroic feats by the virtue of sheer willpower.

Now, in the world of Craig's Bond, all of this is slightly deglamourized. There isn't as much sex, and Craig shows more skin (yummy, rock-like-muscle-fortified skin) than the ubiquitous Bond girls. But there is a shift in threats from countries to psychotic individuals along the lines of Nolan's Joker. As we said, there is a lot that is different, and, without saying much, just plain shocking.

However, there is a lot that is just the same. The beautiful cars, the martinis, the product placements, and as a birthday gift, the original Aston Martin DB5 that was first seen in Goldfinger (1964) - they're all back. But they're all back in the 21st century where horrific crimes are committed on the click of a finger, where the enemy escapes by hacking the MI6 systems, and where danger coming from an individual is as great as the danger from a nation, if not more with the added element of unpredictabilty.

Considering all of this, the way the plot is unraveled and the climax is executed is a bit of a let-down. Silva, who has the potential to be a much more formidable enemy, is dumbed down towards the end for the convenience of the plot. While it makes sense that Bond, when unable to fight by Silva's terms, decides to lead him to his home turf in Scotland, it definitely does not make sense that Silva would show up there in a helicopter with a handful people, especially considering the fact that he managed to blow up the MI6 headquarters from China. Scotland isn't that far away from England.

The action sequences, though not as unremitting as in the previous parts, are as awesome as can be. The Aston Martin DB5, ejectible seat and all, makes a special appearance to a smattering of an applause (how else do you know you're watching a Bond flick?). The speakeasy style music is as much a part of the story as the nonchalant dialogue.

Craig is as amazing as ever as the melancholically heroic, damaged-ly sexy version of 007. Judi Dench makes a magnificent exit from the series. Ben Whishaw as the new Q fits his part to a T.

And Javier Bardem. Paraphrasing Dench's line from the movie, what do we say about a man like that? You can tell that Bardem is enjoying his character as much as we all are. He oozes evil - the crazy kind that is left behind by unspeakable horror.

However, what confounds the average Bond aficionado is an utter disregard for continuity. You might say that a story that has had a career of 50 years is bound to end up in a tangled mess, but the pre-Craig movies had at least a semblance of a long story told in parts.

Also marring your experience watching an otherwise flawless movie is the slightly too chatty characters. There is just a little too much soul-searching and bonding (not the double-O kind) and emotion-stuff, all of which might be required for the evolution of Bond from preening macho man to tortured hero, but need to be backed by enough action to justify the shift to Bond lovers.

The direction that the legacy of James Bond is taking might not be agreeable to everyone; but watch it anyway for the sake of the good old times, and for the brave new future.
Share. Save. Connect.
Tweet
SKYFALL SNAPSHOT 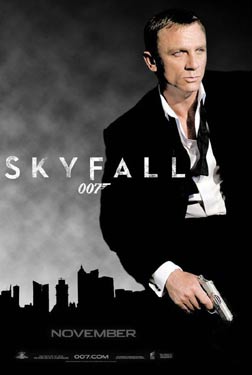 ADVERTISEMENT
This page was tagged for
Skyfall english movie
Skyfall reviews
release date
Daniel Craig, Judi Dench
theatres list
Follow @fullhyderabad
Follow fullhyd.com on
About Hyderabad
The Hyderabad Community
Improve fullhyd.com
More
Our Other Local Guides
Our other sites
© Copyright 1999-2009 LRR Technologies (Hyderabad), Pvt Ltd. All rights reserved. fullhyd, fullhyderabad, Welcome To The Neighbourhood are trademarks of LRR Technologies (Hyderabad) Pvt Ltd. The textual, graphic, audio and audiovisual material in this site is protected by copyright law. You may not copy, distribute, or use this material except as necessary for your personal, non-commercial use. Any trademarks are the properties of their respective owners. More on Hyderabad, India. Jobs in Hyderabad.