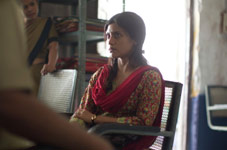 Josh / fullhyd.com
EDITOR RATING
7.5
Performances
Script
Music/Soundtrack
Visuals
9.0
8.0
7.0
7.0
Suggestions
Can watch again
Yes
Good for kids
No
Good for dates
No
Wait for OTT
No
Talvar is an important film. But then, so were Not A Love Story and Manjhi. These films are important in that they cinematise true incidents. And events that are worth being retold as cinema are usually salient strands in the social fabric. So de facto, these films are important. But the truly significant thing about Talvar is how it transcends this default and unearned importance.

For those with the proverbial rock as their roof, Talvar is a fictionalised account of the infamous Noida double murder case wherein a young girl (Ayesha Parveen) is murdered one night and the initial blame is leveled on the house-help who appears to be absconding. However, the house-help's body is found on the roof a couple of days later. Both the murders appear to have been committed by the same person (with precise cuts on the jugular vein), and both the murders have occurred at around the same time.

Soon charges on the parents (Neeraj Kabi and Konkona Sen Sharma) surface, and it is argued that the father discovered the ongoing relationship between the house-help and the daughter and, in a fit of cataclysmic rage, committed both murders. These accusations rock the country, and the scandal just keeps building with stories of how the girls' parents (both doctors) indulged in wife-swapping with another couple. About this time, the case gets transferred from the police to the Investigation department, and its officer comes up with a completely different hypothesis - that the parents are innocent, and that the doctor's assistant (Suman Gulati) and driver are guilty.

You can see Ram Gopal Verma licking his lips. It is a surprise he let this one go. And it's our fortune he did. Because this plot falling in the hands of Vishal Bhardwaj is among the best things that happened to Indian cinema this year.

The writing is plain amazing. The movie definitely takes a stand (as is common in films based on true events), but the subtlety is a marvel to watch. The calm assuredness with which the point is made is exemplary. No melodramatic dialogue or gut-wrenching background score masquerading as writing here - Bhardwaj does the real thing. He writes impactful scenes. Particularly, the couple of scenes between Irrfan (playing investigating officer Ashwin Kumar) and Tabu (Ashwin's separating wife) stand as unambiguous testimony to the quality of writing.

And the film further benefits from some refreshingly confident filmmaking from director Meghna Gulzar. She builds a riveting narrative, and is ably supported by her editor (Sreekar Prasad). Scenes segue into each other, and the multiple threads of the narrative play without confusion. Or exhaustion. The movie doesn't feel like over-explanation at any point - you'll often find yourself just asking for more. The cinematography by Pankaj Kumar definitely contributes, and is particularly effective when the frames settle on a meditative Irrfan gulping down booze with road-side noodles.

And making the best of all this backstage talent is the stellar cast. While Irrfan very much takes centrestage (and he does it so, so well), everybody else is exceptionally good, too. Neeraj Kabi and Konkona Sen Sharma are spot on with the muted suffering (in one narrative) as well as the convincedly sinister (in the other narrative). Tabu is there for three scenes, and is plain fabulous in them.

Even the supporting cast is terrific. Gajraj Rao is a hoot as the complacent police officer as much as Atul Kumar as the officer working from conclusion to evidence (as opposed to the other way round). Suman Gulati as the doctor's assistant is wonderful, too. Indeed, as far as performances go, this one is like the World XI team with even the extras having a couple of centuries in their kitties.

We could keep coming up with more superlatives, but we have to warn you Talvar isn't easy viewing. That isn't to say it is serious throughout. In fact, it has some of the best humour on screen in recent times. There are some crackling lines on the missionary position, and you'll just have to laugh out loud. The issue we are talking about is the bitter truth that the movie portrays. Whether or not the parents were guilty, this is a sad story. It is horrible to even imagine parents killing their own child. And if they hadn't killed their daughter, it is soul-crushing to see them being punished in this way for actually being victims.

We began with how movies based on significant true incidents are de facto important. Talvar, however, goes beyond and shows us that being based on true incidents isn't enough - they have to be made into good cinema, too. We keep watching films on incidents that were sensational and scandalous, but how often are they good movies? Much too often, the writers and directors seem to be assuring themselves that the film is good because they got a good plot, regardless of execution.

Indeed, Bhandarkar (with the likes of Calendar Girls) appears to think jargon and scandal are all you need to make a good film. Jha (of Chakravyuh and Aarakshan) seems to believe touching upon an important issue and featuring mainstream stars is the sure route to meaningful cinema. Mehta (Manjhi and Mangal Pandey) takes exciting life stories and treats them with a solvent that sucks all the interest out of them. And then, there is Verma (you know the list) who is convinced that nauseating camera angles and deafening background music is all it takes to churn out hard-hitting cinema.

ADVERTISEMENT
This page was tagged for
Talvar (Hindi) hindi movie
Talvar (Hindi) reviews
release date
Irrfan Khan, Konkona Sen Sharma
theatres list
Follow @fullhyderabad
Follow fullhyd.com on
About Hyderabad
The Hyderabad Community
Improve fullhyd.com
More
Our Other Local Guides
Our other sites
© Copyright 1999-2009 LRR Technologies (Hyderabad), Pvt Ltd. All rights reserved. fullhyd, fullhyderabad, Welcome To The Neighbourhood are trademarks of LRR Technologies (Hyderabad) Pvt Ltd. The textual, graphic, audio and audiovisual material in this site is protected by copyright law. You may not copy, distribute, or use this material except as necessary for your personal, non-commercial use. Any trademarks are the properties of their respective owners. More on Hyderabad, India. Jobs in Hyderabad.