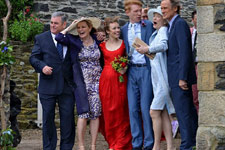 Nupur Barua / fullhyd.com
EDITOR RATING
5.0
Performances
Script
Music/Soundtrack
Visuals
6.0
4.0
7.0
7.0
Suggestions
Can watch again
No
Good for kids
No
Good for dates
Yes
Wait for OTT
No
Think of all the British films that you remember, without thinking too hard. If you are a regular moviegoer without the intellectual snobbery of a film buff, chances are that the names you can come up with will include the more commercially successful and easily accessible Four Weddings And A Funeral, Notting Hill, Bridget Jones's Diary (and its sequel, Bridget Jones: The Edge Of Reason), and Love Actually.

And all these films have one thing in common - the writer, Richard Curtis. So when this highly successful man (also the director of Love Actually and The Boat That Rocked) makes a new movie, expectations are high. And of course, there is the Bill Nighy factor.

This time, in About Time, Curtis decides to deal with time travel. A rather tricky subject, but more on that later. Tim (Domhnall Gleeson) is quite the loser adolescent, but he loves his family, with whom he lives in Cornwall. He is secure in the routine that persists in the daily schedule of his family, so imagine his surprise when his father (Bill Nighy) waits for him to reach 21 to spring the family tradition on him.

All the men in his family, Tim is told, can travel through time. There are limitations, of course, the principal one being that he cannot travel into the future. The introverted Tim missed kissing a girl on New Year, and that is where he goes back, to set it right.

Now he has this power, but he is more interested in finding love. And he seems desperate to marry the first girl that attracts him, which includes the family's summer guest Charlotte (Margot Robbie). Failing that, he finally moves to London to become a lawyer, and there he meets with Mary (Rachel McAdams), who makes his heart melt. After a series of accidental alternate futures, Tim and Mary get together.

Tim, essentially a nice guy, keeps travelling in time to set things right for other people, including his self-destructive sister Kit Kat (Lydia Wilson), and tries his best not to cause the butterfly effect. The consequences, however, catch up with him.

Time travel, as a concept, is a risky one to put on screen. Science fiction aficionados are always the first to point out the discrepancies that may be invisible to the ordinary viewer. In About Time, however, even the most indifferent audience will be able to figure out, easily, the various logical loopholes.

The screenplay sets up this entire song and dance about travelling only into the past, but Tim jumps forward and backward whenever he wants. And he even manages to take his sister along once, although the screenplay emphasises the exclusivity granted to only the men in the family.

And towards the end of the movie, the plot just turns more and more confusing and illogical, till you finally lose interest. The climax is a letdown. Besides, although the lead couple makes you smile, you may get slightly annoyed with the stereotyping in the supporting characters - the cool father, the even cooler mother, the vague uncle, the blabbering friend and so on. Their dialogues are pretty predictable, too.

About Time has mixed genres, literally (coming-of-age, rom-com, father-son-relationship, nostalgic-history etc), and this, too, may be jarring if you expect a simple, sweet tale of love and science fiction.

Domhnall Gleeson comes across as sleazy, sincere, idiotic, desperate, kind, selfish and selfless as Tim, at various crucial points in the movie. It is almost as if he cannot decide which persona to adopt permanently. As an actor, he delivers his lines well, but he is the most unconvincing 'nice' guy that Richard Curtis has ever presented.

Rachel McAdams, who was already the lead in The Time Traveller's Wife, is lost, but that may be because her character, who is supposed to be devoid of normal girly habits, does not know that her beloved travels through time in this movie.

Bill Nighy is a delight, as usual, but he is a bit restrained here. One expects more melodrama from him. Tom Hollander and Lindsay Duncan are wasted, and Lydia Wilson seems unsure of what exactly she is supposed to be doing in the movie.

Certain locations such as the Cornwall property and the residential areas of London add a certain character to the movie, but they are not shown as much as you would have wanted. The colours and costumes do not specify a time period, and production design seems rather ambiguous. The movie could have finished a bit earlier, instead of running on for two hours. The soundtrack has some interesting numbers.

About Time may not be the best Richard Curtis movie that you have watched, but it still has a few moments that make it worth two hours of your life. Do not, however, expect the magic of Love Actually or Notting Hill, and concentrate on Bill Nighy. You may just come out of the theatre with a smile on your face.
Share. Save. Connect.
Tweet
ABOUT TIME SNAPSHOT 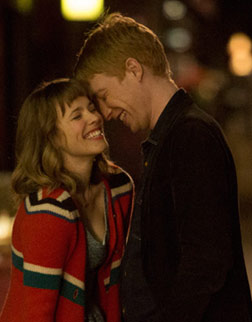 ADVERTISEMENT
This page was tagged for
About Time english movie
About Time reviews
release date
Domhnall Gleeson, Rachel McAdams
theatres list
Follow @fullhyderabad
Follow fullhyd.com on
About Hyderabad
The Hyderabad Community
Improve fullhyd.com
More
Our Other Local Guides
Our other sites
© Copyright 1999-2009 LRR Technologies (Hyderabad), Pvt Ltd. All rights reserved. fullhyd, fullhyderabad, Welcome To The Neighbourhood are trademarks of LRR Technologies (Hyderabad) Pvt Ltd. The textual, graphic, audio and audiovisual material in this site is protected by copyright law. You may not copy, distribute, or use this material except as necessary for your personal, non-commercial use. Any trademarks are the properties of their respective owners. More on Hyderabad, India. Jobs in Hyderabad.