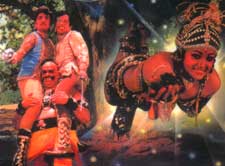 EDITOR RATING
5.0
Performances
Script
Music/Soundtrack
Visuals
NA
NA
NA
NA
Suggestions
Can watch again
NA
Good for kids
NA
Good for dates
NA
Wait for OTT
NA
One piece of advice for this movie - don't ask too many questions. The film is at least 15 years old, and the special effects were designed for an audience that hadn't seen technical wizardry like in Jurassic Park as children. It is a mythological period piece (obviously!) - yes, one of the 'once upon a time...' stories.

A wizard asks a favor of the ghost called Bhetaala, and when it refuses, confines him to a tree. Now, the king of that kingdom is missing, and the sex-crazy army general Pratap is living it up. His advances on the princess Jayanti are spurned. Enter village simpleton Subbaiah who makes a deal with Bhethaala - Subbaiah frees it and in return, Bhetaala will make him king. Bhetaala is supposed to possess Jayanti, and, upon the recital of a chant, to leave her. Of course, only our man knows the complicated chant.

The queen offers the princess' hand in marriage to the guy who cures her but when Subbaiah gets there, Pratap throws him in jail. There he meets Chandram who knows some magic. They go to some cave and get magic powers. They then go to the palace as holy men and some old-time comedy follows. Our hero forgets the chant, which prolongs the story a little.

Finally he cures Jayanti, but Pratap brings a Tantrik of his own who defeats the hero's magic and banishes him. When Pratap blackmails Jayanti into marrying him by threatening her parents, she prays to the goddess who restores the hero to health (hmm... now where have I seen that before?). Anyway, the hero obviously wins the climax showdown and Bhethaala takes care of the Tantrik.

This movie does not belong here. Did I mention that it is a 3D film? Though the novelty is fun at times (some people were actually reaching out), the only thing the extra 3 bucks (for the 3D glasses) buy you is a headache! Forget story credibility altogether (there are even a couple of cabarets - one by the apsara Rambha, no less!). The only thing this film can offer is entertainment for your kids or your grandmother! Jai Bhethaala!
Share. Save. Connect.
Tweet
JAI BETAALA (HINDI) SNAPSHOT

ADVERTISEMENT
This page was tagged for
Jai Betaala (Hindi) hindi movie
Jai Betaala (Hindi) reviews
release date
Narsimha Raju, Nagesh
theatres list
Follow @fullhyderabad
Follow fullhyd.com on
About Hyderabad
The Hyderabad Community
Improve fullhyd.com
More
Our Other Local Guides
Our other sites
© Copyright 1999-2009 LRR Technologies (Hyderabad), Pvt Ltd. All rights reserved. fullhyd, fullhyderabad, Welcome To The Neighbourhood are trademarks of LRR Technologies (Hyderabad) Pvt Ltd. The textual, graphic, audio and audiovisual material in this site is protected by copyright law. You may not copy, distribute, or use this material except as necessary for your personal, non-commercial use. Any trademarks are the properties of their respective owners. More on Hyderabad, India. Jobs in Hyderabad.