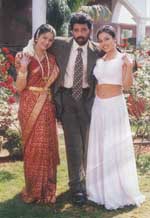 EDITOR RATING
5.0
Performances
Script
Music/Soundtrack
Visuals
NA
NA
NA
NA
Suggestions
Can watch again
NA
Good for kids
NA
Good for dates
NA
Wait to rent it
NA
The only thing that this 'comedy' lacks is a laughtrack. 'Akka Baavekkada' is the result of the efforts of a group of guys challenged for class trying to make up for it by crass. So, as they try to practically force you into laughing, there is enough decibel level to make Chaplin gyrate in his grave.

Akka! Baavekkadaa? is one of those regular loud comedies that have dared to become even louder after the success of movies like Kshemanga Velli Labhanga Randi. And when there is Kovai Sarala in a lead role can there be any scope for sophistication?

In this film too, Kovai Sarala plays the role of Mangamma, a loud-mouthed irksome hag, who ekes out a living robbing people of their belongings to make her son Suryam (Chakravarthi) lead a comfortable life. Her only dream in life is that her son should marry a millionaire heiress. But Suryam, soft and sensible that he is, doesn't have an iota of his mother's gutter intelligence or her roughshod way of life.

Fate seems to hear Mangamma's prayers as Suryam meets a millionaire's daughter Sowmya (Raasi) when both of them get accidentally caught in an almairah. After some more bizarre trysts, they fall in love. And Sowmya's father too accedes to the marriage. But Sowmya's sister Shilpa (Asha Saini) refuses to allow the marriage to take place, as Suryam is the man of her dreams. And she wants to have him for herself.

Mangamma realizes that she has to resort to trickery to save the situation and tells Shilpa and Co. that she in fact has two sons. And the second one is Chandram who is not worthy of marriage as he is bad to the core. But the stunt-loving Shilpa insists on marrying Chandram alone. And the remaining film shows how Mangamma uses various tricks to salvage the situation every time there is a suspicion. Till the end.

The film is supposed to be a hilarious comedy. And there is little hilarity in it. Chakravarthi seems to have lost the zing in acting and appears with a wooden expression throughout the film. He seems to have developed a passion for delivering flop movies. It is high time he took stock of his dwindling fortunes and made attempts to resurrect his career. He followed up the averagely average Maa Pelliki Randi with two disasters - Suri and Navvutoo Batakaliraa! - and this lackluster film adds to the list.

Kovai Sarala tends to get on your nerves with her trademark brand of humor. And the same applies to Giri Babu and L B Sriram, too. Of the cast, the leading ladies - Raasi and Asha Saini - perform their roles well. Asha Saini is the best of the lot as she infuses a little glamour to the film. If you are a lover of silence and follow the library rules regularly, don't dare to venture to watch this film. Lovers of noise can watch the Star Plus soaps instead.
Share. Save. Connect.
Tweet
AKKA BAVEKKADA? SNAPSHOT

ADVERTISEMENT
This page was tagged for
Akka bavekkada mve wikipedia
akka bavekkada wiki
akka bavekkada full movie
akka bavekkada telugu full movies download
Akka Bavekkada? telugu movie
Follow @fullhyderabad
Follow fullhyd.com on
About Hyderabad
The Hyderabad Community
Improve fullhyd.com
More
Our Other Local Guides
Our other sites
© Copyright 1999-2009 LRR Technologies (Hyderabad), Pvt Ltd. All rights reserved. fullhyd, fullhyderabad, Welcome To The Neighbourhood are trademarks of LRR Technologies (Hyderabad) Pvt Ltd. The textual, graphic, audio and audiovisual material in this site is protected by copyright law. You may not copy, distribute, or use this material except as necessary for your personal, non-commercial use. Any trademarks are the properties of their respective owners. More on Hyderabad, India. Jobs in Hyderabad.