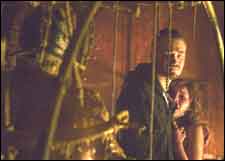 EDITOR RATING
5.0
Performances
Script
Music/Soundtrack
Visuals
NA
NA
NA
NA
Suggestions
Can watch again
NA
Good for kids
NA
Good for dates
NA
Wait for OTT
NA
Contrary to what the ad campaign might persuade you to believe, House Of Wax is not a porn film starring Paris Hilton. That is available separately. fullhyd.com, being more or less a legal site, cannot provide you a link there, but Google will - search for "Paris Hilton" (yes, that's enough). Just make sure you don't watch it in front of your kids. If you are the kid, then make sure you don't watch it in front of your adults. It is also illegal, so it might not be a great idea to call up Hilton's lawyers and tell them you watched it, and then give them your name, full address and telephone number.

House Of Wax is about a pair of very talented brothers who can create exact wax replicas of dead people. The only difference from Madame Tussaud's is that they kill the person first. They then actually skin him and cover him in wax to make him look perfectly like he was before. We at fullhyd.com would call this reinventing the wheel, but we guess they have their reasons. Also, Madame Tussaud's has got the 100% wax replica thing patented, and this way they are not breaking the law.

They are leading a merry life like this for over 10 years, when one day they try to do this to Paige Edwards (Paris Hilton), which proves to be a mistake on several levels, not least of them being that it's a pointless exercise, since even otherwise she is just as good as a wax replica of hers. They should've just watched this movie, and they'd have known. Well, perhaps she does show certain emotions in that other famous movie of hers, but if those are all the emotions you can show, it's a rather limited repertoire for life's various needs. They would, for example, confuse a grocer who you're just asking for a bag of salt.

Anyway, what happens is that Carly Jones (Elisa Cuthbert) is driving with her brother Nick (Chad Murray), boyfriend Wade (Jared Padalecki), bumchum Paige, and two other friends to watch a big football game, when along the way they run out of gas and into a desolate town with a "House Of Wax", a wax museum, in it.

This is the best part of the movie, simply because nothing else can be called the best part of this movie. Unknown to them, the museum is actually a mausoleum, with all models being made from the actual humans - the two brothers take the concept of giving someone a makeover to new heights. Then, first Wade disappears, and the process of skinning him to a wax model has plenty of gore and detail - the brothers are experts at it, and you should not attempt it at home.

The others are taken one after the other, until Carly and Nick prowl right back, setting the stage for a flaming denouement that's a triumph of art direction and CGI over a gothically unfortunate plot. The effects of the film, especially the climax, do deserve a special mention. None of the performances does, unfortunately, though they all do what they are supposed to do.

Will you enjoy the film? fullhyd.com's reviews are our understanding of how much we Hyderabadis will enjoy a film. The thrills of this one are over-the-counter products at the horror-film FX store, but they do thrill. There's plenty of gore, viscera, impaling, and stand-alone flesh. And, as we said, there's a leg-grabbing climax as the wax monolith melts into its raw material. Plus, the babe factor - Cuthbert is in a tank-top, and Hilton is talked out of one, for the greater part of the film.

The first part is rather slow, but on the whole this works.

ADVERTISEMENT
This page was tagged for
House Of Wax english movie
House Of Wax reviews
release date
Elisha Cuthbert, Chad Michael Murray
theatres list
Follow @fullhyderabad
Follow fullhyd.com on
About Hyderabad
The Hyderabad Community
Improve fullhyd.com
More
Our Other Local Guides
Our other sites
© Copyright 1999-2009 LRR Technologies (Hyderabad), Pvt Ltd. All rights reserved. fullhyd, fullhyderabad, Welcome To The Neighbourhood are trademarks of LRR Technologies (Hyderabad) Pvt Ltd. The textual, graphic, audio and audiovisual material in this site is protected by copyright law. You may not copy, distribute, or use this material except as necessary for your personal, non-commercial use. Any trademarks are the properties of their respective owners. More on Hyderabad, India. Jobs in Hyderabad.