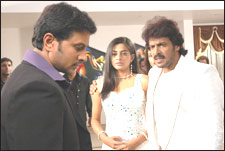 Bharath Lingam / fullhyd.com
EDITOR RATING
3.0
Performances
Script
Music/Soundtrack
Visuals
NA
NA
NA
NA
Suggestions
Can watch again
NA
Good for kids
NA
Good for dates
NA
Wait to rent it
NA
Toss is founded on an impressive premise: Ten lies uttered may create a truth, but a hundred lies uttered can never deny a truth. Unfortunately, the brilliance of the lines is restricted to a display during the opening credits, and the plot itself develops into a cop-and-robber theme during the first half and a revenge story late into the second.

The story goes like this: Parasuram (Raja) is God s gift to society, pretty like any other Telugu movie hero. A true multi-tasker, he looks chic, creates a whirlpool of flying bodies anytime he steps among a bunch of baddies, walks into court dramas uninvited and wins over hardened judges with his humanistic arguments, and so on. Parsu s ultimate dream is to become a cop, but in the meantime, he is practicing for the higher calling by launching a Self-Employment Tax and biding time in afovementioned activities.

While Parasuram is the do-gooder, Neelakanta (Upendra) is his anti-thesis. If the dress is the index of the mind, then his case pretty much fits the bill. Clad in a black suit, and with a black cowboy hat topping it, he is the resident purveyor of evil; who along with his motley crew of men in black strikes terror in the hearts of fellow criminals and police alike.

This phenomenon of evil, with a voice chilly enough to turn milk to curds, is defined by his ability to swallow poison without affecting him, and his happy propensity to chop off the hand of anyone woolly-headed enough to touch his angelic sister. The sister is visually challenged, and played by the graceful Priyamani.

Nayak (Suman) is the Police Commissioner one with an excessively-dyed moustache. He has a reputation for fairness, and demonstrates a great deal of indulgence towards the activities of Parasuram. He employs the latter as an undercover agent to recover stolen loot from Neelakanta and also obtain evidence of his criminal activities.

His plan however goes for a toss as our young hero falls in love with Priyamani, and as the plot progresses, the motives of the various characters are revealed. Only, by this time The way the climax is stretched is farcical, and the final fight is a pain to watch with its terrible lighting and meaningless CGI.

The two major problems with Toss are the plot and the screenplay. The movie might ve been interesting had the motives of the characters been established right in the beginning. However the film meanders on till two-thirds of the allotted time in just establishing the characters, and by the time the motives are revealed, you lose interest completely. The movie would ve still been acceptable had Raja s antics been more realistic and relevant to the plot. But this just doesn t happen, and the tale never strikes home.

Raja is charming and capable throughout the film, but he is yet to develop the poise and intensity that is the hallmark of mature actors. Upendra gives an able performance but his scope to excel is limited given the lack of variety in his role. Kamna is good in the comedy scenes, and Priyamani plays her role to perfection in all dimensions.

The comedy is good in parts, but otherwise appears disjointed, and doesn t move the story forward. The music doesn t really stand out either, but the costumes, settings and choreography for the songs deserve a mention.

You will do yourself a favor by skipping this one just about anything else will entertain you better.
Share. Save. Connect.
Tweet
TOSS - BOMMA BORUSAA SNAPSHOT

ADVERTISEMENT
This page was tagged for
Toss - Bomma Borusaa telugu movie
Toss - Bomma Borusaa reviews
release date
Upendra, Raja
theatres list
Follow @fullhyderabad
Follow fullhyd.com on
About Hyderabad
The Hyderabad Community
Improve fullhyd.com
More
Our Other Local Guides
Our other sites
© Copyright 1999-2009 LRR Technologies (Hyderabad), Pvt Ltd. All rights reserved. fullhyd, fullhyderabad, Welcome To The Neighbourhood are trademarks of LRR Technologies (Hyderabad) Pvt Ltd. The textual, graphic, audio and audiovisual material in this site is protected by copyright law. You may not copy, distribute, or use this material except as necessary for your personal, non-commercial use. Any trademarks are the properties of their respective owners. More on Hyderabad, India. Jobs in Hyderabad.