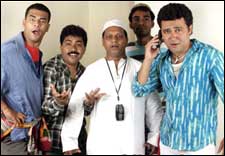 Ghazala Rizvi / fullhyd.com
EDITOR RATING
7.0
Performances
Script
Music/Soundtrack
Visuals
NA
NA
NA
NA
Suggestions
Can watch again
NA
Good for kids
NA
Good for dates
NA
Wait to rent it
NA
The old city awakens to its morning trade - Ismail bhai and his gang start the day at the local chai shop. The air is legit with gossip, babble and rigmaroles of bravery. For people for whom vests aren't just underwear, and being Dubai returned is the height of ambition, life is a treat to be savored - along with free chai and Osmania Biscuit.

Sridhar Rao's The Angrez takes you on a soiree through the glittering gallis of Lad Bazaar, Chudi Bazaar, Afzalgunj and Madina, and jiffs you across the elite Banjara Hills, Jubilee Hills and everything that's hi-tech. For here, the very old meets the very new, and you get plenty of reason to fall in love with the city all over again.

The Angrez is about the very local flavor, the one that resides on the right side of the Charminar. It also dabbles with the other side of the Hyderabadi mirror, where there are people who slog their life in tiny cubicles so that they can rev up their lifestyles - that 1/100th of their time that they spend out of office. Then there are The Angrez, who draw to the city like moths - and burn their fingers.

Rochak (Ganesh Venkatraman) and Pranay (Kuntaa Nikkil) are freshly returned NRIs who are testing Hyderabadi waters for resettlement, as well as for eligible wives. They find a receptive host in cousin Ramesh, and an equally accommodating friend in Prasad, whose office they join for getting a lowdown on the city's biz.

In the city, the NRIs are hot - as potential husband material, as ransom exchange policy, or as plain bakras. Life for Pranay and Rochak was just spicing up, with cool Hyderabadi chhokris, patent biryani, and sizzling pub-life putting a skip in their gait.

Their Hyderabadi sojourn is a new learning all along. Pranay and Rochak encounter paradoxes in most mundane of experiences - the acclaimed mirchi ka saalan sets their palate on fire, mini-skirt clad girls tow their parents' line in matters of love, and relatives hobnob with gangsters for a piece of their NRI wallets.

While these two friends were chalking out itineraries to make-out with the city's chicks, cousin Ramesh was colluding with Mama, the typical master of the Hyderabadi underbelly, for their kidnapping for ransom. Mama and his goondas take the assignment as a Bonalu prasadam, and the big plan is set in motion.

As if doing 100 sit-ups to appease the gods at Ganesha pooja, and churning out 500 bucks for a plate of biryani was not enough, Pranay and Rochak are caught on the wrong foot, and that too in the old city. Innocuous as they may be, English words sometimes tend to be misinterpreted - especially if the audience is Ismail Bhai's gang of smartypants.

What started as a harmless spat under the Charminar, becomes an issue worth dying for - Ismail Bhai's izzat can only be restored by the angrezaan's head, hair, clothes, shoes, or whatever that can be had with ease. Sniffing out the trail of the culprits, the gang makes a foray, first into their Banjara Hills residence and then at their hi-tech office.

What follows is a hilarious series of incidents - Ismail Bhai and his gang's peekaboo with the angrezaan is an absolute craze. The ensuing fracas with Mama and his gang, and a brush with romance culminate the movie. And the life, the Hyderabadi style, goes on.

Kuntaa Nikkil and Ganesh Venkatraman, as the desi Americans who are trying to return to their roots, are credible if not outright ticklish. The real calorie-burners are Ismail Bhai and his gangsters - with their itra ki botlaan and badle ki baantaan. M Sridhar Rao’s take on living in the city of the nawabs hits right at the bull's eye. His use of Telugu, Urdu and English in a delectable potpourri, adds additional twang to the flick.

But you won't need any language to decipher this one - humor, flavored with nuances of the city, is contagious on its own merit.
Share. Save. Connect.
Tweet
THE ANGREZ SNAPSHOT

See The Angrez full details
TOP COMMENT
Vaishal Pattel on 21st Jan 2008, 11:39pm | Permalink
I like it very much
And Salim Feku act excellent....
51
2
USER RATING
10
THE ANGREZ USER REVIEWS
1 - 15 OF 99 COMMENTS  |  NEXT  |  LAST
POSITIVE  |  NEGATIVE |  NEWEST  |  OLDEST  |  MOST HELPFUL  |  LEAST HELPFUL
USER RATING
8.2
968 USERS
Performances
Script
Music/Soundtrack
Visuals
10.0
10.0
10.0
10.0
Can watch again - No
Good for kids - Yes
Good for dates - No
Wait to rent it - Yes
amjad on 15th Oct 2014, 3:35pm | Permalink
kya yaro link bhejo angrez 2 ka amjad from bangalore
ADya on 24th Aug 2013, 9:40am | Permalink
The best hyderabadi comedy, Ismail bhai and his gang is excellent...liked it very much
Nas on 4th Apr 2008, 8:57am | Permalink
This is a good movie in its concept. The hyderabadi guys are good especially Ismail Bhai and the Gang. Salim Pheku is awesome to watch. Now the supposed "NRIs" with their fake accent which isn't even American I reckon. That was awful. Fucking awful. Overall I give the movie half a star for trying.
RATING
2
Sunny Augustine on 25th Feb 2008, 7:02pm | Permalink
This movie is good only for Khattas.
a big asshole movie. If you wann see realistic movie See Malayali movie, you will get coconut free Saugustine@cristalarabia.com

RATING
10
Alok Das on 7th Jul 2007, 7:24pm | Permalink
it made me laugh
i was searching for this type of movies.
is there anybody would like to tell me any other movies like THE ANGREZ
thank you

ADVERTISEMENT
This page was tagged for
angrej movie review
hyderabadi movie the angrez movie
hedrabadi angrez1 comedye salim
the angrez full movie
hedrabadi comedi salim angrez
Follow @fullhyderabad
Follow fullhyd.com on
About Hyderabad
The Hyderabad Community
Improve fullhyd.com
More
Our Other Local Guides
Our other sites
© Copyright 1999-2009 LRR Technologies (Hyderabad), Pvt Ltd. All rights reserved. fullhyd, fullhyderabad, Welcome To The Neighbourhood are trademarks of LRR Technologies (Hyderabad) Pvt Ltd. The textual, graphic, audio and audiovisual material in this site is protected by copyright law. You may not copy, distribute, or use this material except as necessary for your personal, non-commercial use. Any trademarks are the properties of their respective owners. More on Hyderabad, India. Jobs in Hyderabad.