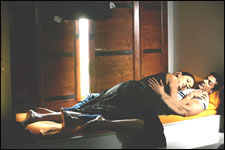 Samrat Sharma / fullhyd.com
EDITOR RATING
5.0
Performances
Script
Music/Soundtrack
Visuals
NA
NA
NA
NA
Suggestions
Can watch again
NA
Good for kids
NA
Good for dates
NA
Wait to rent it
NA
Mahesh Bhatt's writing has always tried to dress up serious issues in a slickly done package with some entertainment mileage. Unfortunately, while his handle on the topicality of relevant issues remains spot on, his finger on the thin line that separates the dramatic from the realistic is not so great anymore.

Dhokha is no different. There's a little bit of romance, some thrilling investigative stuff, and a whole lot of terrorism related preaching, but the basic ends of story are firmly rooted in Bollywood nonsense.

Bollywood has never been known to let the facts get in the way of message mongering or preaching to the masses, and Dhokha is not an exception. It comes across like an overly maudlin and manipulative film, but the good news is that it is a fairly well-executed example of the kind.

Newcomer Muzammil Ibrahim plays Zaid, the kind of police officer you only find in films - good looking, honest, and sporting a six-pack. When one night he is on duty helping out victims of a bomb blast at a public place in Mumbai, he is shocked to discover that one of the bodies is that of his wife. The senior policemen also tell him that the injuries on his wife, Sara (Tulip Joshi), are tell-tale signs of a suicide bomber.

As Zaid's whole life comes crashing down, he is transfixed between the memories of his wife, and his own investigation that increasingly points towards his wife's involvement. He comes to know of the atrocities committed on her family in Kashmir, and how she was recruited by a fundamentalist selling a better worldview, only to serve their own purposes.

While the screenplay by Shagufta Rafique is slow and meandering to begin with, her approach is fresh, and she interweaves the narrative with some deft touches of nostalgia. Pooja Bhatt, for her part, tries to make the stark contrast between the memories of Zaid and Sara's family pronounced. Her handling of these moments is well-crafted, and hey, one never complains about technical imbalance in the Bhatt films anyway.

The trouble is in contriving the emotional content of the film - the writing talent seems to take far too many liberties for its own good. For one, Sara's upper torso is intact after a blast that took many other lives with it. For another, the end is tied up a little too neatly, and extremely hurriedly.

Pooja Bhatt's handle on the emotional graph of the film is not as even as you'd like it to be either. While some moments are restrained, and almost poetic in their content, there are still some loud, shrieky moments with the supporting cast.

Speaking of the cast, much of what is right in Dhokha comes from them. Newcomer Muzammil Ibrahim does not have great acting chops, but he tries hard, which is more than what Anupam Kher brings to the table, evidently in for a quick paycheck.

Gulshan Grover stays away from his hammy tendencies, while Ashutosh Rana restrains in his performance as well. It's Tulip Joshi who is the biggest revelation, with a performance that is sublime and smacks of a very confident actress, a far cry from her wooden face in her debut film.

Commendable, too, is the eloquent cinematography by Anshuman Mahaley. Completely devoid of any flashy or bombastic experiments, it's subtle and underscores the emotional content of the film honestly. Pooja Bhatt's penchant for keeping things simple helps the Mahaley's work, and the film looks very soothing, especially after RGV's blundered overshot film I saw this week.

Despite all the talent on display behind and in front of the camera, Dhokha has the feel of a calculated attempt at melodrama carefully plotted and executed to pluck at our emotional strings and then tie everything up in a small neat package. There is some amount of satisfaction to be had in the fact that emotionally contrived as it may be, at least the film is well-crafted and delivers on more entertainment value that a whole lot of similar films.

The movie is far from sensationalistic, though it still cannot be chalked up to good intention. The idea here is of making money, and if it needs to show certain cringe-worthy events slightly slickly to do so, then so be it.

Fortunately for the Bhatts, since the only competition is the utterly contemptible Aag, you might as well go give this one a gander.
Share. Save. Connect.
Tweet
DHOKHA SNAPSHOT

ADVERTISEMENT
This page was tagged for
Dhokha hindi movie
Dhokha reviews
release date
Muzammil Ibrahim, Tulip Joshi
theatres list
Follow @fullhyderabad
Follow fullhyd.com on
About Hyderabad
The Hyderabad Community
Improve fullhyd.com
More
Our Other Local Guides
Our other sites
© Copyright 1999-2009 LRR Technologies (Hyderabad), Pvt Ltd. All rights reserved. fullhyd, fullhyderabad, Welcome To The Neighbourhood are trademarks of LRR Technologies (Hyderabad) Pvt Ltd. The textual, graphic, audio and audiovisual material in this site is protected by copyright law. You may not copy, distribute, or use this material except as necessary for your personal, non-commercial use. Any trademarks are the properties of their respective owners. More on Hyderabad, India. Jobs in Hyderabad.