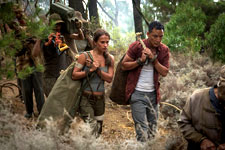 Daphne Rose / fullhyd.com
EDITOR RATING
7.5
Performances
Script
Music/Soundtrack
Visuals
8.0
9.0
8.0
8.0
Suggestions
Can watch again
Yes
Good for kids
Yes
Good for dates
Yes
Wait for OTT
No
When news of a possible reboot of the Tomb Raider series starting doing the rounds back in 2016, the only word on everyone's mind was sacrilege. Angelina Jolie's near-perfect portrayal of the gaming world's most badass heroine meant some big shoes to fill, after all. So when you forget all about Jolie halfway through this 2018 reprise of the series that features Alicia Vikander as Lara Croft, you know this film's struck gold and then some.

Tomb Raider has Vikander playing a Lara Croft that's been living in penury, waiting for a father (Dominic West) who's been missing for the past seven years. A certain chain of events bring her face-to-face with certain clues regarding where Croft Sr might've been before he disappeared all those years ago, causing Croft to set out on an adventure the likes of which she hasn't been on before.

The first thing that hits you when you watch the reboot is that this Lara is not like the other Lara. Sure, the movie, as does its source material the video games, runs along familiar lines - ancient myths, secret organisations looking for global dominion, adventure, do-or-die kind of situations... the works. But where Jolie played her Lara with a cool sort of possession, smirking at intruders and beating up baddies with a flick of her wrist and with some aggressive display of bad-assery when pushed into a corner, Vikander's Croft is all too human. She isn't infallible - on the contrary, she hurts, she groans, she cries, even going so far as to having a complete break-down in the event of her first kill.

It is these things which make Tomb Raider's world that much more realistic. The sense that as much as we'd all like to be heroes, saving the world like it was just another day at work, the long and short of it in reality isn't that easy, or pleasant. For Croft might've learnt all the survival skills she'd need through this series in her childhood, but it's only through a trial by fire, the kind that's shown in the movie, that she properly learns how to use them to survive.

Tomb Raider then is an origins story, and director Roar Uthaug does a brilliant job in helming one where other, more illustrious names before him (Duncan Jones of Warcraft and Justin Kurzel of Assassin's Creed fame) have failed. In staying true to the script of the video game, Uthaug gives fans of the video game genre what they've long wanted - a faithful adaptation - and this singular move goes a long way in establishing the credibility of the movie.

Which is not to say that there aren't sore spots in the film's screenplay. There are, especially in the middle act where Lara is still coming to terms with all that's happening to her - an important part of the movie, maybe, but one that starts to get dull after a while for meandering away from the actual tomb raiding that everyone's here for. Then there's the curse of the interval, a wholly Indian problem when it comes to Hollywood movies, that leads to a clean detachment from a film that's been an immersive experience so far, and that, too, just when things are getting exciting.

The visuals are a high point of the movie. Shots of London, Japan and the deep seas that Lara needs to navigate as part of her crusading experience are downright gorgeous. There are multiple scenes in the film, one on a boat and another on a plane in particular, that are stunning and all the more laudable for the fact that you know it's green screen all over. The music by Junkie XL (Tom Holkenborg), however, starts off on a high note, immediately elevating the energy of the film, but peters out somewhere in the middle to seeming almost non-existent after.

The performances by the supporting cast - Dominic West as Richard Croft, Walton Goggins as Vogel and Daniel Wu as Lu Ren - provide good support to the lead character's efforts. Wu in particular is admirable for shining through despite being relegated to a side kick. Hollywood's careless substitution of ethnic roles, in this case Chinese actors being cast as Japanese characters, is still a case of uncool, though. Meanwhile, Kristin Scott Thomas comes in for a short bit as Ava Miller, an employee of Croft industries, and by the looks of it, might have a larger role to play in the future of this series.

All said and done, Tomb Raider is definitely one of the better video-game adaptations out there, and one that you should definitely not give a miss. Comparisons between Tomb Raider and Wonder Woman are meant to be, but where Diana is born from the gods themselves, Lara has more humble, human origins that allow you the very believable pleasure of living vicariously through her - if only you had an aristocratic name, mad ninja-skills and tomb raiding 101s to boot. Not a very tall order, non?
Share. Save. Connect.
Tweet
TOMB RAIDER SNAPSHOT 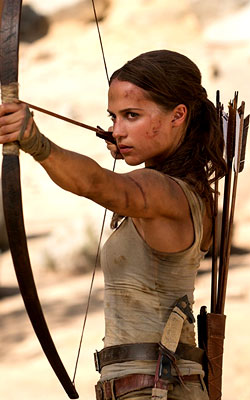 ADVERTISEMENT
This page was tagged for
Tomb Raider english movie
Tomb Raider reviews
release date
Alicia Vikander, Dominic West
theatres list
Follow @fullhyderabad
Follow fullhyd.com on
About Hyderabad
The Hyderabad Community
Improve fullhyd.com
More
Our Other Local Guides
Our other sites
© Copyright 1999-2009 LRR Technologies (Hyderabad), Pvt Ltd. All rights reserved. fullhyd, fullhyderabad, Welcome To The Neighbourhood are trademarks of LRR Technologies (Hyderabad) Pvt Ltd. The textual, graphic, audio and audiovisual material in this site is protected by copyright law. You may not copy, distribute, or use this material except as necessary for your personal, non-commercial use. Any trademarks are the properties of their respective owners. More on Hyderabad, India. Jobs in Hyderabad.