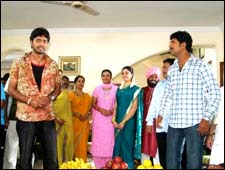 "Allare Allari" is somewhat like the Sahara Desert - mostly dry, flat, and featureless, interrupted by the occasional oasis of laughter. It's a reasonable effort, but will have to quietly join the ranks of the Funny Movies That Might Have Been Great.

Anand (Venu) is a conscientious doctor who disrupts Swathi's (Parvati Melton) wedding because the groom has been romancing Anand's colleague's daughter. Swathi takes this in her stride because it's for a good cause, but begins to pursue Anand to recoup her wedding expenses, and in the process falls in love with him.

Meanwhile, Anand's aunt, who is in jail for hacking two of her husband's killers to death, has already received a promise from his father that Anand will marry her US educated daughter (Mallika Kapoor). Of course, before this can take place, there is the small matter of Anand having to hack to death murderer #3 (Raghubabu), to prove his manhood to his aunt.

As Anand falls for Swathi, the aunt (who is the type who makes "strong men wince and hide their valuables", to borrow a phrase) is released from jail. To keep his engagement with Swathi a secret, Anand offers up Veerababu (Naresh) as the real Dr. Anand to the aunt.

Veerababu is a watchman-cum-general-purpose-utility-guy in the apartment that Anand lives in, with the rest of the cast being residents in the same building. From then on, it's basically a cat and mouse game of how Anand and Veerababu have to hide the truth and somehow get hitched before aunty can find out.

It has all the right ingredients, but the chef seems to have taken a break. On and off there are seriously funny moments, and the occasional flashes of brilliant dialogue and comic timing that is the hallmark of great comedy, but for the most part the narrative drags from one not-so-funny incident to another.

The entire cast does a good job as a whole, one wishes the script and screenplay had given them more scope to show off their considerable skills. With the wealth of comic talent at hand, there is more than one chance to throw in a set-piece funny sequence (think the final chase in Michael Madana Kama Raju, or something similar). It could've had people in stitches, rolling in the aisles, but alas it was not to be.

Basically it is just the sort of movie that gives reviewers nightmares. Every night, before going to bed, we get down on our knees and pray to The God of OK Films and (with a Sridevi-in-Kshana Kshanam accent) say, "Devuda devuda devuda, please don't send us a movie about which we can't fully make up our minds!" The entire "Allare Allari" experience only goes to prove that the gods don't always listen to your prayers.

In the final analysis, whether you will enjoy "Allare Allari" or not depends entirely on your own personal threshold for comedy. If you think your threshold is low enough, you can happily go and watch this one. On the other hand if you're expecting a non-stop laughathon, give it a miss.
Share. Save. Connect.
Tweet
ALLARE ALLARI SNAPSHOT

ADVERTISEMENT
This page was tagged for
Allare Allari telugu movie
Allare Allari reviews
release date
Naresh, Venu
theatres list
Follow @fullhyderabad
Follow fullhyd.com on
About Hyderabad
The Hyderabad Community
Improve fullhyd.com
More
Our Other Local Guides
Our other sites
© Copyright 1999-2009 LRR Technologies (Hyderabad), Pvt Ltd. All rights reserved. fullhyd, fullhyderabad, Welcome To The Neighbourhood are trademarks of LRR Technologies (Hyderabad) Pvt Ltd. The textual, graphic, audio and audiovisual material in this site is protected by copyright law. You may not copy, distribute, or use this material except as necessary for your personal, non-commercial use. Any trademarks are the properties of their respective owners. More on Hyderabad, India. Jobs in Hyderabad.