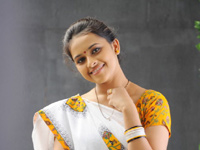 Kritika Deval / fullhyd.com
EDITOR RATING
5.5
Performances
Script
Music/Soundtrack
Visuals
7.0
5.0
6.0
7.0
Suggestions
Can watch again
No
Good for kids
No
Good for dates
Yes
Wait for OTT
Yes
Lakshmi (Sri Divya) is a middle-class Telugu girl with dreams of small joys; and has a self-centred new husband (George Vincent) who seems to have been put on this planet to divest her of them, and to not take her out in the evenings, as she thought when she got into it.

It is a concern that pervades the Indian society but still doesn't change much - the idea that two strangers should be expected to spend their whole lives together despite the fact that one of them is hell-bent, not only on not giving an inch, but also on even acknowledging that the inch exists.

It is under these circumstances that our delicate mallepuvvu (one of the more obvious metaphors of Mallelatheeram Lo Sirimallepuvvu) meets Kranthi (Kranthi), a lyricist who claims to have left the realms of the dvaita to achieve advaita.

It takes as long for Lakshmi to be enamoured of this sweet, knowledgeable and sensitive man as it does for her to completely give up on her marriage with her driven, "no room for romance" husband - that is, a span of about three on-screen encounters.

So, you might see why we're not quite convinced that hubby dearest deserved to be cheated on so blithely. We really feel for the husband when our flower buds take the better part of the pre-interval time to spout clich?©s, sing old Telugu songs, drink coffee, and let their love blossom.

When we're not trying really hard not to doze off, that is.

You see, MLS is a really sensible depiction of a woman stuck in an untenable situation who has the guts to do something about it. What is even more surprising is that those around her react sensibly too, perhaps too sensibly for reality. But that does not change the fact that this wasn't meant to be more than a 30-minute short film. We can back this opinion up by telling you about how we checked our watches after what seemed like the millionth time a certain pair of doors opened and closed, and saw that it had only been 45 minutes since we entered the movie hall.

This could've been a good enough film, had it been reduced to about half its length. It would've made its point, we could've heard the script-writer show off his knowledge of Telugu literature, and, maybe with a limitation like that, the director would've used a little more creativity, resulting in a few more dimensions to the tale than just a dissatisfied young woman's musings on life and its meaning.

The lady's dating a bona fide lyricist. We'd really like to have known, for instance, what he felt about falling in love with another man's wife. Alas, he spent so much time spouting impressive-sounding quotable quotes that we had no time to figure out what's in his heart.

This does not take anything away from the fact that there was some fine, fine acting on display. Kranthi, George, and Rao Ramesh (as Lakshmi's father) play their roles just as they ought to.

Sri Divya has a wonderfully expressive face that blooms in joy as quickly as it crumples in despair. It is a delight to watch the play of expression on her face, her nose twitch in annoyance, as she compulsively worries her lower lip. You see, this is the sort of movie in which you notice such things. It is, in essence, the story of Everywoman, told straight from the heart. It just would have been better on paper.

The camera work and the editing is very reminiscent of Telugu films of the '90s, and, while pleasing enough to the eye, are just a little less polished than they ought.

The music is also pleasant, but the background score, especially this particular melody that keeps repeating, is rather annoying.

Bottomline: We do need landmark films that give realistic portrayals of contemporary relationships. Unfortunately, this one falls short of the mark by virtue of overkill.
Share. Save. Connect.
Tweet
MALLELATHEERAMLO SIRIMALLEPUVVU SNAPSHOT 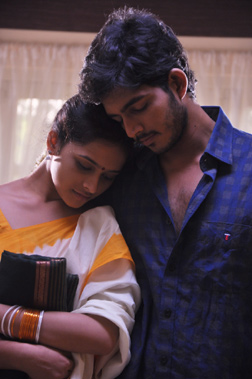 ADVERTISEMENT
This page was tagged for
Mallelatheeramlo Sirimallepuvvu telugu movie
Mallelatheeramlo Sirimallepuvvu reviews
release date
Kranti Chand, Sri Divya
theatres list
Follow @fullhyderabad
Follow fullhyd.com on
About Hyderabad
The Hyderabad Community
Improve fullhyd.com
More
Our Other Local Guides
Our other sites
© Copyright 1999-2009 LRR Technologies (Hyderabad), Pvt Ltd. All rights reserved. fullhyd, fullhyderabad, Welcome To The Neighbourhood are trademarks of LRR Technologies (Hyderabad) Pvt Ltd. The textual, graphic, audio and audiovisual material in this site is protected by copyright law. You may not copy, distribute, or use this material except as necessary for your personal, non-commercial use. Any trademarks are the properties of their respective owners. More on Hyderabad, India. Jobs in Hyderabad.