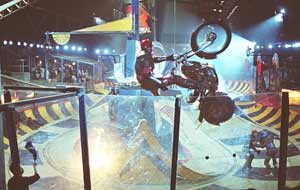 Smriti Kashyap / fullhyd.com
EDITOR RATING
3.0
Performances
Script
Music/Soundtrack
Visuals
NA
NA
NA
NA
Suggestions
Can watch again
NA
Good for kids
NA
Good for dates
NA
Wait to rent it
NA
You know those dumb black bags into which you throw your trash? A hash of all those plastic papers, ice cream boxes, dog fluff, vegetable peels, mango seeds? Well, great news - it's just been made into a movie (that bunch of garbage).

Rollerball is one of those midsummer night's nightmares that you get stuck in a moment and you can't get out of (U2 anyone?). You want to scoot the minute you read the titles... LL Cool J and Rebecca Romijn Stamos? A rapper and a model? It's like Diya Mirza and Dunston The Ape!

Whatever! The filmmakers seem to have cornflakes in their heads in place of brains as they make a flick that is on the lines of extreme sports. No, we're not talking golf, but something we all know as WWF. Remember those series with big, overfed, fake-nasty men, jumping and pounding their opponents in more fake a manner than Diya Mirza's accent?

Anyway, move over WWF and roll in Rollerball. Jonathan (Chris Clein) is basically a maniac who slides down the streets of what looks like downtown some American city, risking life and limb to get his share of kicks. A Luge freak, he gets an offer by Marcus Ridley (LL Cool J) to join the extreme sports show called Rollerball, which he promises will bring home the moolah.

Jonathan says yeah, and they move on to Kazakhstan where the weird show is hot as a Hyderabad afternoon. The game as such is pretty weird... a bunch of guys on rollerblades have to slam dunk a metallic ball into a basket ball-ish hoop, all the while battling it out with racers on bikes (???) who are out to get them. More complicated looking than a banana split with dates in it, this game's ratings zoom when the show is bigger and bloodier.

The show's owner Petrovich cashes into the blood and guts funda and wants to go global with a cable deal he hopes to clinch. This is the dumbest story, if you could call it that, that I have heard since little Red Riding Hood.

Anyway, team mate Aurora (Rebecca Romijn - Stamos) gets traded out of the team towards the end, much to the heartbreak of Jonathan.

Rollerball, as you can see, is nothing much but a feeble excuse to make a flick for testosterone rich 13-year-old boys with an empty skull and spare change in their pockets. The movie with its cast is a few clowns short of a circus, and nothing more. You might actually enjoy the flick if you overlook Chris Clein's horrifying lack of acting skills and LL Cool J's non-existent credibility. And this is easier said than done. And if you're trooping in to see hottie Rebecca Romijn Stamos, then be warned - she's wasted.

Rollerball, apart from having a terrible cast, has a dumb storyline (a fact oft repeated in the preceding lines), and even worse music. It's like a nightmare rock video gone ghoulishly wrong. Somebody needs to eject Chris Clein out of the planet... SOOOOOOOON! He's so agonizingly dumb, if his brains were bird droppings, he'd have a clean cage.

As for me, I'm staying home and exorcising myself of this Rollerball bhoot by watching some WWF re-runs (yech!).
Share. Save. Connect.
Tweet
ROLLER BALL SNAPSHOT

ADVERTISEMENT
This page was tagged for
Roller Ball english movie
Roller Ball reviews
release date
Chris Clein, Jean Reno
theatres list
Follow @fullhyderabad
Follow fullhyd.com on
About Hyderabad
The Hyderabad Community
Improve fullhyd.com
More
Our Other Local Guides
Our other sites
© Copyright 1999-2009 LRR Technologies (Hyderabad), Pvt Ltd. All rights reserved. fullhyd, fullhyderabad, Welcome To The Neighbourhood are trademarks of LRR Technologies (Hyderabad) Pvt Ltd. The textual, graphic, audio and audiovisual material in this site is protected by copyright law. You may not copy, distribute, or use this material except as necessary for your personal, non-commercial use. Any trademarks are the properties of their respective owners. More on Hyderabad, India. Jobs in Hyderabad.