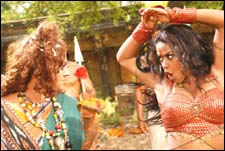 Deepa Garimella / fullhyd.com
EDITOR RATING
2.0
Performances
Script
Music/Soundtrack
Visuals
4.0
2.0
4.0
2.0
Suggestions
Can watch again
No
Good for kids
No
Good for dates
No
Wait for OTT
No
The snake gods are unhappy that man mercilessly kills snakes for his selfish ends. To set things right, they send a computer-generated serpent-couple to earth. One of these becomes Mumaith Khan and dances with the other, with a fervour enough to cause earthquakes in Antarctica.

Then, there is this tantrik who, along with some oily-haired villains, is hankering after the jewels in the heads of our 2 cobras. The villains manage to shoot the male one dead, but the female snake escapes. For their mission to succeed, they must find a girl who has a snake tattooed onto her back. Their search gets frustrating or disgusting, depending on which side of the screen you are sitting. This is because no one has taught them the meaning of words like "needle" and "haystack", leave alone "decency" and "morals".

Far away in Hyderabad, Nagamani (Mumaith Khan again) is that girl. She is the butt-kicking kind who makes the best of our gravity-defying film heroes run away in shame. And her clothes are the kind to make Somalian tribals run away in shame.

Nagamani is the daughter of a cop, who dies in a shootout that also leaves her injured in hospital. The tantrik senses her presence. Her aides get the male cobra's jewel secretly inserted into Nagamani's body with the help of the doctors. But Nagamani is soon found missing. In reality, she's inside a dopey comedy track involving a bunch of thieves including Rajeev Kanakala.

Incidentally, Nagamani's dad died trying to nab the very villains in our story. These villains had perpetrated every stratum of society, and are now wreaking havoc using brown sugar, smuggling, etc. Now Nagamani wants to avenge her father's death.

Whenever she's left alone with any of the bad guys, first, her skin turns into a Photoshop nightmare. Within minutes, the rest of her body follows. Being more forgiving than one would normally be towards one's enemies, she bites her victims to death, thus sparing them of the horrors of the disastrous camerawork.

The concerned Kanakala and gang, her witnesses, take her to the tantrik to help her. This lady now weaves a mean plan to get what she was after. Very little of the story's left now, and involves both the Mumaith Khans, a flashback, and several super-human powers - in whoever's left watching the film, that is.

Unfortunately, God wasn't around when the evil ones decided to make this battered-up turkey. Much of the story doesn't make sense until they explain it to you in a flashback towards the end, and the dialogues are lame. The visuals are a riot - watch out for the nylon snakes and the messy graphic-cobras. The soundtrack, in places, can make a jungle stampede sound like a meditation hall. The songs almost fall in the same league.

And this movie doesn't suffer just from a corny script and poor visuals. Though the bunch involving Rajeev Kanakala act well, their acting skills have been misused here. His lengthy comedy track involves plenty of lewd jokes around the fact that his wife doesn't get 'turned-on' by him. M S, in a 5-minute role, gets to use some despicable language.

Mumaith Khan makes you yearn for the women who have charmingly donned the snakeskin earlier - her role displays an IQ of life forms which lived before the wheel was invented, and she wears clothes that were designed even earlier. None of that magenta-silver make-up or dazzling Bharatanatyam dresses.

The bottom line is that this is something you wouldn't want to be caught dead watching. In a theatre, at least - cyber cafes offer more privacy, we hear.
Share. Save. Connect.
Tweet
PUNNAMI NAGU SNAPSHOT

ADVERTISEMENT
This page was tagged for
Punnami Nagu telugu movie
Punnami Nagu reviews
release date
Mumaith Khan, Rajeev Kanakala
theatres list
Follow @fullhyderabad
Follow fullhyd.com on
About Hyderabad
The Hyderabad Community
Improve fullhyd.com
More
Our Other Local Guides
Our other sites
© Copyright 1999-2009 LRR Technologies (Hyderabad), Pvt Ltd. All rights reserved. fullhyd, fullhyderabad, Welcome To The Neighbourhood are trademarks of LRR Technologies (Hyderabad) Pvt Ltd. The textual, graphic, audio and audiovisual material in this site is protected by copyright law. You may not copy, distribute, or use this material except as necessary for your personal, non-commercial use. Any trademarks are the properties of their respective owners. More on Hyderabad, India. Jobs in Hyderabad.