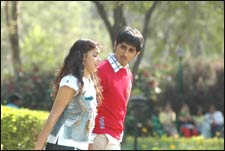 Technically, Bommarillu is the story of a boy who is over-protected by his father, and wants to break out and be independent at least in his choice of his life partner. Considering this was where the drawing board began, Bommarillu is a significant feat in fleshing out a clichéd skeleton into a piece of worksmanship. The film doesn’t betray the frailty of its core anywhere, and what you have on screen is the stuff that both articulates and reinforces the most optimistic dreams of every youngster about finding his/her life partner.

Siddharth (Siddharth) is an engineering graduate and CAT aspirant, and the son of Aravind (Prakash Raj), who micro-manages his 24-year-old son’s life. He chooses what shirts Siddharth will wear, what coins he will aim for on a game of carroms, and even how big the piece he tears out of his chapathi to eat should be.

Siddharth now dreads that if he joins his millionaire Dad’s company, he will be sacrificing an independent career, too. So he decides that his career and his wife will be of his own choice, and keeps buying time. But his father gets him engaged anyway to a girl he doesn’t even know, against his will.

Nursing his hurt feelings with support from friends, Suddharth runs into Hasini (Genelia) at a temple, and falls in love with her sprightly and guileless persona. He discovers that she studies in the same college as he did, and pursues and woos her.

This first half is arguably the best part of the film. It is basically just the courtship as Siddharth is trying to get Hasini to fall in love with him, but it is peppered with so many fun incidents in a refreshing original screenplay, and has such a brilliant performance from Genelia, that it becomes reason enough in itself to watch the film.

Genelia brings to life the talkative, spontaneous and completely unaffected Hasini in a way that very few contemporary Telugu actresses can hope to – it is one of the best characterizations of a college-girl heroine in a long time. She clearly steals the show, from even the highly talented Siddharth. In the definition of what she’s told to do, she does a brilliant job.

Aravind finds out about the girl, of course, and cannot accept that Siddharth might have made a correct decision for himself, but in an accommodative gesture, asks Siddharth to get Hasini to stay in their house for a week, at the end of which he will pronounce his judgement on whether she is good enough to enter their family.

Hasini, unquestioningly loyal to her man, the way you are when you are innocent and believe in certain fundamental values without thinking too much, agrees to it, even if it means lying to her trusting father that she is going on a college tour. This part of the movie now is similar to Dilwale Dulhaniya…, with Hasini winning over almost everyone in Siddharth’s family over the span of the second half. Of course, Genelia’s still no comparison to SRK, but that is perhaps mostly since the script for DDLJ was far more convincing in how it showed SRK winning over the family.

In another drawing from DDLJ, Siddharth has also rubbed Genelia’s father (Kota Srinivasa Rao) the wrong way when he (Siddharth) is once drunk. So when circumstances so transpire that even the highly accommodating Hasini dumps Siddharth at the end of her 7-day stay, there are several battles for Siddharth to fight.

Bommarillu is one of the more well-written and innovative films to come out of Tollywood in recent years. The director’s faith in his script is so strong that he needs no woman to show any flesh – not even the little that Godavari permitted itself. In fact, Siddharth hardly touches Genelia in the film.

The performances are all fabulous – even if Jayasudha is grossly underutilized – and the dialogues in the end when Siddarth takes on his father are extremely thought-provoking. It was mostly a teen-crowd at the morning show at Prasad’s, and they’ll all probably turn out to be parents who’ll give their children enough space. Yes, that way, Bommarillu can change quite a few people’s outlook on how to raise their kids.

Bommarillu is a must-watch. After Dil, Arya and Bhadra, Dil Raju perhaps has his biggest yet hit on his hands.
Share. Save. Connect.
Tweet
BOMMARILLU SNAPSHOT

RATING
10
Amair Khan on 14th Feb 2007, 9:05pm | Permalink
its a wonderful movie with all family values i like it very very much the credit goes to the whole team of the movie its a movie which changes the drawback of the society hats of the whole team of the movie
RATING
10
Singhu Kiran on 5th Feb 2007, 1:14am | Permalink
good movie
RATING
8
Kaarana Janmudu on 9th Jan 2007, 10:09am | Permalink
Sri Harsha, Siddharth tells his dad at a breakfast table right in the beginning of the film that he is doing a CAT course. And I think it was a chapathi too.
RATING
8
Sri Harsha on 8th Jan 2007, 9:00pm | Permalink
Whoever wrote the review must watch the movie again. Which part of the movie shows Siddarth as a CAT aspirant. Secondly, visit a local restaurant and order dosa(attu), you need to know the difference between a chapathi and a dosa.

ADVERTISEMENT
This page was tagged for
bommarillu movie review
Telugu movie bommarillu review
Bommarillu cry scene
Bomarillu review telugu
bommarillu telugu full movie
Follow @fullhyderabad
Follow fullhyd.com on
About Hyderabad
The Hyderabad Community
Improve fullhyd.com
More
Our Other Local Guides
Our other sites
© Copyright 1999-2009 LRR Technologies (Hyderabad), Pvt Ltd. All rights reserved. fullhyd, fullhyderabad, Welcome To The Neighbourhood are trademarks of LRR Technologies (Hyderabad) Pvt Ltd. The textual, graphic, audio and audiovisual material in this site is protected by copyright law. You may not copy, distribute, or use this material except as necessary for your personal, non-commercial use. Any trademarks are the properties of their respective owners. More on Hyderabad, India. Jobs in Hyderabad.