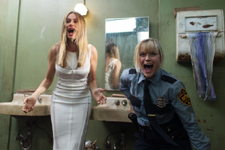 Nupur Barua / fullhyd.com
EDITOR RATING
4.0
Performances
Script
Music/Soundtrack
Visuals
6.0
4.0
5.0
6.0
Suggestions
Can watch again
No
Good for kids
No
Good for dates
Yes
Wait to rent it
Yes
Anne Fletcher, best known for her movie 27 Dresses, teams up with Oscar winner Reese Witherspoon and the hot and funny Sofia Vergara. So what's not to like, especially when the film promises plenty of action, more comedy and some sexy moves? Or at least that is what the trailer would have you believe. Well, the trailer is the best thing about Hot Pursuit, because it does not tell you about the sloppy story or the bad acting.

First the story, though. Officer Rose Cooper (Reese Witherspoon), who is deadly serious about her job and knows everything there is to know about crime, is given a mission. Her father was a cop, too, who was killed in the line of duty, and Cooper is now set to prove her worth.

Her opportunity arrives when her boss, Captain Emmet (John Caroll Lynch), offers her the assignment of a lifetime - to watch and protect Daniella Riva (Sofia Vergara), whose husband Felipe (Vincent Laresca) is about to testify against drug lord Vicente Cortez (Joaquin Cosio).

Cooper jumps to it, but what she does not expect is the loud and brash Riva. The two women make it a point to insult each other's appearances, and team up only when it is absolutely necessary to their survival. Cortez's goons are after Riva, of course, and it is Cooper's duty to keep her safe till after the trial. They rush across Texas to avoid getting killed, and come across various characters that either use them or get used by them, as the duo struggle to stay alive.

This is not an original plot, and the director, in an effort to make her mark in an already-explored genre of cops and robbers, botches up quite a bit. This is supposed to be an action comedy with underlying themes of friendship in the unlikeliest places and all that jazz, but the premise itself lends to a predictable graph of storytelling. What is disturbing is the amount of violence, in the name of humour, that is peppered liberally throughout the movie. Nobody bats an eyelid in the movie, of course, but all that killing and beating cannot be the only way to make the audience laugh.

Riva, because she is Spanish-speaking, predictably has communication problems when she speaks English. Her idioms and phrases are all mixed up, and the lack of understanding between Cooper and her adds to the chaos. Sometimes, however, the miscommunication is convoluted, even if Cooper is a rather straightforward character. The twists and turns in the plot points are irrelevant to the story, as you discover slowly. Once you know where the film is headed, you also find that it drags towards a resolution that you already knew was coming.

Vergara's Riva is not very different from her Gloria Pritchett of the Modern Family series. She is loud enough to set your nerves on edge, but she is funny. She is not self-conscious and does her best to keep the movie together. Witherspoon, on the other hand, is not very convincing as the serious cop, although she has her ultra-funny moments as well. She is constantly frowning, and you get the feeling that she acts dumber than she is.

The other actors blend into the background, except Joaquin Cosio, who is as menacing as he should be in the role he plays. Vincent Laresca and John Carroll Lynch leave a mark, too.

The film shows Texas in a different light, but it is still familiar as the wild frontier. The idea that such unlawful activities abound in this state is just a reinforcement of a stereotype, and therefore believable. The costumes and the sets enhance the concept of the Wild West, now populated by drug mafia lords.

The music, too, adds to the setting. The cinematography is average, even during the action sequences, because the attention is concentrated more on the characters and less on the framing. Although the editing is adequate, the movie seems slow and monotonous, because there is not much happening in terms of story.

Watch Hot Pursuit only if you are a Sofia Vergara fan, and you love her Gloria from the television series. She does not disappoint, and is oddly endearing. We suggest you wait for the DVD release to sit through it, though, because it can be difficult to watch the film in a theatre (it makes you regret the money you spent).
Share. Save. Connect.
Tweet
HOT PURSUIT SNAPSHOT 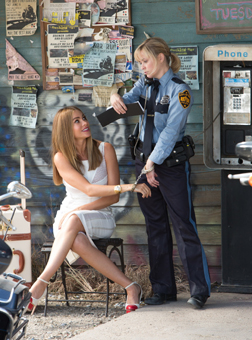 ADVERTISEMENT
This page was tagged for
Hot Pursuit english movie
Hot Pursuit reviews
release date
Reese Witherspoon, Sof?a Vergara
theatres list
Follow @fullhyderabad
Follow fullhyd.com on
About Hyderabad
The Hyderabad Community
Improve fullhyd.com
More
Our Other Local Guides
Our other sites
© Copyright 1999-2009 LRR Technologies (Hyderabad), Pvt Ltd. All rights reserved. fullhyd, fullhyderabad, Welcome To The Neighbourhood are trademarks of LRR Technologies (Hyderabad) Pvt Ltd. The textual, graphic, audio and audiovisual material in this site is protected by copyright law. You may not copy, distribute, or use this material except as necessary for your personal, non-commercial use. Any trademarks are the properties of their respective owners. More on Hyderabad, India. Jobs in Hyderabad.