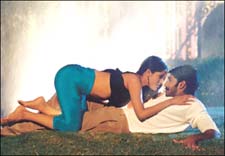 EDITOR RATING
3.0
Performances
Script
Music/Soundtrack
Visuals
NA
NA
NA
NA
Suggestions
Can watch again
NA
Good for kids
NA
Good for dates
NA
Wait to rent it
NA
Thanks starts with Amar (Amar) trying to commit suicide. It's never an encouraging beginning to a film when its lead actor is trying to commit suicide, since you know he's already seen the entire film. Also, when you were entering the theater, there was no one to check if you had the ticket. Combine this with the fact that there was no one else entering, and it appears that everyone knows something. And perhaps they are all watching you - your every step, every expression, every non-chalant tune hummed, every casual sideways glance. You feel as trepid as a weaverbird that is feeling equally trepid. And your every analogy.

He gets back to college, and starts wooing Teja (Reshmi), without knowing that she has already flipped for Sriram (Vineeth), who started when she was like 3. Okay, Sriram originally funded Teja's education, and so she falls in love with him.

After considering funding Teja's education again from the age of 3 himself, Amar decides that the film might appear a little illogical, and so just acts cool and macho, uttering dialogues with impunity and without grammar ("Ninnu kevalam muttukovaali anukunte, it is not a love. It is a lust.").

Teja is willing to forgive him for this since she has to sing 4 more duets with him and can't afford to strain relations at this stage. And it's not like grammar is the biggest problem with this film - with a script like this, they would've needed to cast Tom Hanks and Julia Roberts, and use the entire Time Warner PR arsenal to make it last a fortnight.

Teja is preparing for the IAS selection procedure, and it's hard to remember what happens next, though we can say with some certainty that the film ended. Amar keeps trying the rest of the film for Teja, and loses in the end when she tells him that she's always been in love with Sriram. Then Sriram dies when he is brutally murdered in the middle of the road. (Why, you ask? Sheesh, wouldn't you die if you were brutally murdered in the middle of a road? God, our readers drive us nuts sometimes.)

So all's well that ends well, with Amar marrying Teja. The film ends saying "Thanks" for Sriram's "sacrifice". Thankfully, it doesn't say that more people should perform such sacrifices.

Amar is a newcomer, and so you cannot expect him to match up to an Uday Kiran. Okay, rewrite that sentence as you wish. Reshmi can easily be confused for the heroine of the film, and since she fortunately is, there is no egregious problem there. Vineeth looks as miscast as an actor traveling in a train that can cross a cyclist traveling in the same direction in 18 seconds, and the same cyclist traveling in the opposite direction in 12 seconds. Okay, there seems to be some problem with our analogies today.

If you like the music, don't tell anyone. The comedy is crass, and AVS and Dharmavarapu Subrahmanyam should learn to protect their dignity.

Tip: If you're taking a girl to this film on your first date with her, you will immediately have another first date.
Share. Save. Connect.
Tweet
THANKS SNAPSHOT

ADVERTISEMENT
This page was tagged for
thanks telugu film
thanks telugu movie
thanks movie.com
thanks movie
thanks movie review
Follow @fullhyderabad
Follow fullhyd.com on
About Hyderabad
The Hyderabad Community
Improve fullhyd.com
More
Our Other Local Guides
Our other sites
© Copyright 1999-2009 LRR Technologies (Hyderabad), Pvt Ltd. All rights reserved. fullhyd, fullhyderabad, Welcome To The Neighbourhood are trademarks of LRR Technologies (Hyderabad) Pvt Ltd. The textual, graphic, audio and audiovisual material in this site is protected by copyright law. You may not copy, distribute, or use this material except as necessary for your personal, non-commercial use. Any trademarks are the properties of their respective owners. More on Hyderabad, India. Jobs in Hyderabad.