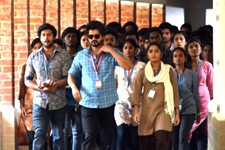 Anil Bandhakavi / fullhyd.com
EDITOR RATING
7.5
Performances
Script
Music/Soundtrack
Visuals
8.0
8.0
6.0
8.0
Suggestions
Can watch again
Yes
Good for kids
Yes
Good for dates
Yes
Wait to rent it
No
Good and evil are often born of the same pain. Some embrace the pain and are fuelled by it to inflict the same upon others, becoming a force of evil; while others resolve that no such pain should ever be experienced by another human, becoming a force of good. There comes a time when these two forces collide, and it is our belief that ultimately good prevails. It is this age-old antagonism that Lokesh Kanagaraj utilises in his film Master to keep his viewers hooked, and it works.

The film begins by introducing us to Bhavani (Vijay Sethupathi) and John "JD" Durairaj (Vijay). Bhavani wrongfully gets thrown into an observation home by some corrupt men after his parents are killed. Instructions are specifically provided to give him extra harsh treatment in an attempt to keep him quiet about his parents' death, which he endures and overcomes.

It becomes Bhavani's mission to take control of the men who inflicted pain upon him, but in the process he himself turns corrupt and starts using the children of the observation home for his own ends. He becomes a force to reckon with as he uses the observation home as a breeding ground for his powerful network of gangsters, with which he wields power over the type of men who created him.

Somewhere in another world is JD: the carefree, happy-go-lucky, alcoholic professor. The members of the faculty despise his ways, but he is beloved by his students who have his back in all situations. JD lives his life like he's one of the students, drinking and partying with them, applying none of the natural boundaries that you would expect between student and teacher. However, he's no slacker when it comes to the job of teaching, using the most creative methods to carry out his classes, thus holding down his colleagues in sort of a Catch-22 situation.

No one knows the reason for JD's self-destructive way of life. Whenever someone asks him about his past, he weaves an intricate and comical story around heartbreak that is always a rendition of some popular romantic flick. One of the new faculty members, Chaaru (Malavika Mohanan), is very curious about JD, and has faith that he can turn around the situation at one of the observation homes that she learned about while she worked at an NGO.

When JD ends up at the observation home, he realises that the job is a lot more complicated than he had initially anticipated. As he's confronted by the miserable life of the children at the home, he is forced to face the bitter truth that good intentions alone are not sufficient, and that it is a good way of life that is required to bring about positive change. For the first time, JD has to face his own demons to crack the situation at hand.

Master is an exciting film that thrills. Vijay Sethupathi shines bright in his role as the bad guy, who is likable throughout for his confidence and nonchalant personality. Vijay also carries out the good guy moments that are meant to deliver a lump in your throat with seamless professionalism. While the movie strongly revolves around these two characters, whose impending clash you await, the surrounding performances keep the story intact at all times, with some of the child actors really bringing in their A game.

Malavika Mohanan, like it happens to the leading women in many films of this nature, is overshadowed by the protagonist who gets more attention, but deserves mention for her part in the story, without which JD's character would be quite incomplete.

At 179 minutes, Master is a tad long, and could've probably been wrapped up in 160 minutes. The cinematography by Sathyan Sooryan is visually appealing, with realistic sets that enhance the mood of the situation, and special effects that will make you accept the gravity-defying superhuman stunts. There are no hiccups in the music by Anirudh Ravichander, which sounds like it was composed to fit the personalities on screen.

Overall, Master is a must-watch to add the joy of the Sankranti holiday, and definitely finds itself in the list of movies that are being hailed as the season's blockbusters. The age-old good-vs-evil battle remains fresh in this film.
Share. Save. Connect.
Tweet
MASTER - 2021 SNAPSHOT 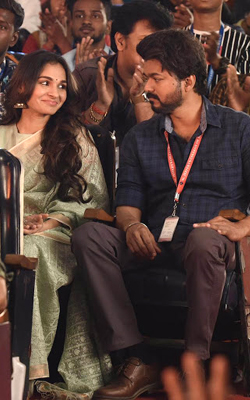 ADVERTISEMENT
This page was tagged for
Master - 2021 telugu movie
Master - 2021 reviews
release date
Vijay, Vijay Sethupathi
theatres list
Follow @fullhyderabad
Follow fullhyd.com on
About Hyderabad
The Hyderabad Community
Improve fullhyd.com
More
Our Other Local Guides
Our other sites
© Copyright 1999-2009 LRR Technologies (Hyderabad), Pvt Ltd. All rights reserved. fullhyd, fullhyderabad, Welcome To The Neighbourhood are trademarks of LRR Technologies (Hyderabad) Pvt Ltd. The textual, graphic, audio and audiovisual material in this site is protected by copyright law. You may not copy, distribute, or use this material except as necessary for your personal, non-commercial use. Any trademarks are the properties of their respective owners. More on Hyderabad, India. Jobs in Hyderabad.