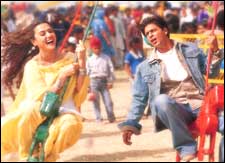 Deepa Menon / fullhyd.com
EDITOR RATING
5.0
Performances
Script
Music/Soundtrack
Visuals
NA
NA
NA
NA
Suggestions
Can watch again
NA
Good for kids
NA
Good for dates
NA
Wait to rent it
NA
The somewhat Heer-Ranjha type title might lead you to think Veer-Zaara is a story of love and the Ultimate Loss. But Veer Zaara is not a tragedy. The tragedy is that you might have to watch it in the near future. After all, research shows us that there is one frothing Shah Rukh fan for every 20 regular Indians, so it's only a matter of time before one of them drags you for three non-stop hours of Weep-Zyada.

At this point we must reassure you, as we do with many SRK films, lest we get bitten by a fan on the loose: we do not hate Shah Rukh Khan. So please don't hunt us down with torches and burn us at the stake. Thank you.

So, Veer-Zaara. An Indian boy falls in love with a Pakistani girl. You can see the problem right there. No, it isn't that this story has already been done. It is that this is a fairly broad outline, with fairly predictable results. Either boy gets girl and there's much rejoicing in the fields of Punjab, or boy and girl die in slow motion since it is the only way they can be together. One way or the other, you've heard it all before.

The story starts in Pakistan as a young lawyer, Saamiya (Rani Mukherjee), goes to visit her first ever client, a man who refuses to talk. Unfortunately, this state of affairs doesn't last very long and Veer (Shah Rukh) tells her his entire story.

Veer and Zaara (Preity Zinta) are thrown together for two days in India, when she comes to scatter the ashes of a beloved grandmother-figure (Zohra Sehgal). Not the cheeriest occasion, but things soon warm up when Veer takes Zaara to his village among the fields. And love blooms everywhere.

But, unfortunately, Zaara is already engaged to marry someone else (Manoj Bajpai), to protect her conservative family and her father's political ambitions. When Veer goes to Pakistan to bring her with him, he realizes that their love has been "selfish". But even though they part, her fiancé still wants his revenge, so he gets Veer locked up.

Not a spectacular story. But we don't think anyone was going for Spectacular Story with Veer-Zaara. This is supposed to be a highly emotional film about everything from Indo-Pak relations to ma ke haath ka laddoo. Everyone cries a lot and the director is always unsure about whether you've actually gotten what he's trying to say. So he says it again and again and again. It's like having a bad joke explained to you in great detail.

A lot of the movie is similarly repetitive and hackneyed. Shenais wail, bhangra blares and scenes jump disturbingly from somber to furiously colorful. The only thing Veer-Zaara has going for it is the all-too-short appearance of Bachchan. When he speaks you jump on his every word for some relief from the wailing melodrama. Also, a few scattered dialogues are composed and delivered with passion. On the whole, this "special Diwali release" is about as enjoyable as your next-door neighbour's display of the 5,000-laddi. Just ceaseless, pointless noise.

And see the results.

RATING
2
Raghavan on 18th Nov 2004, 3:26am | Permalink
Thats why I love people at fullhyd. I show this page to the people who are planning to drag me to watch this drag. And once they are through with this, I am free again..

Keep up the good work..

RATING
2
Rahul on 16th Nov 2004, 8:27am | Permalink
I think its important to realize what your expectations are from a Chopra movie. The movie has its share of flaws, and which romantic movie does not? The point is - its a good movie, but a Love Legend - ITS DEFINITELY NOT! The story easily couldve been told under 3 hours. Please Karan - GET THE WARDROBE CORRECT FOR SRK IN UR MOVIES!!!!
RATING
8
Biswakesan Mohanty on 15th Nov 2004, 2:40pm | Permalink
Easily can be said that its the third flop from the great Yash Chopra after his previous two disasters Vijay and Parampara.
RATING
4
Rajiv Verma on 15th Nov 2004, 4:28am | Permalink
i agree with the editor, but i wud be more bold and say that this movie sucks sooo bad, that after watching the movie, you might have nightmares!!!!!
RATING
2
LEAVE A COMMENT
fullhyd.com has 700,000+ monthly visits. Tell Hyderabad what you feel about Veer-Zaara!
MORE MOVIES
Latest Reviews
Satyameva Jayate 2
Ghostbusters: Afterlife
Eternals
Eternals (Telugu)
Eternals (Hindi)
more
Dune
Venom: Let There Be Carnage
No Time To Die - Telugu
No Time To Die - Hindi
No Time To Die
SR Kalyana Mandapam
Ippudu Kaaka Inkeppudu
Thimmarusu
Kadhanika
Shukra
Contemporary Reviews
Jaal
Thanks
Yuvasena
Lakshmi
Awara Paagal Deewana
more
Satta
Maa Iddari Madhya
Swades
Andagaadu
Shabd
Padmashree Laloo Prasad Yada...
Zameer
The Scorpion King
National Treasure
Random Reviews
Sri Sai Mahima
!! Satya Bol !!
Transporter 2
Raat Shikhar (Last Gasp)
D-War (Telugu)
more
Anjaneyulu
Hiss (Telugu)
The Whistleblower
Wreck-It Ralph
Escape Plan
Boochamma Boochodu
The Walk (3D)
King Arthur: Legend of the S...
Hello Guru Prema Kosame
30 Rojullo Preminchadam Ela
SEARCH MOVIES
Dissatisfied with the results? Report a problem or error, or add a listing.
ADVERTISEMENT
SHOUTBOX!
{{todo.name}}
{{todo.date}}
[
ip{{todo.ip}}
]
{{ todo.summary }}... expand »
{{ todo.text }} « collapse
First  |  Prev  |   1   2  3  {{current_page-1}}  {{current_page}}  {{current_page+1}}  {{last_page-2}}  {{last_page-1}}  {{last_page}}   |  Next  |  Last
{{todos[0].name}}

ADVERTISEMENT
This page was tagged for
veer zaara movie
movie veer zaara hindi
Veer-Zaara hindi movie
Veer-Zaara reviews
release date
Follow @fullhyderabad
Follow fullhyd.com on
About Hyderabad
The Hyderabad Community
Improve fullhyd.com
More
Our Other Local Guides
Our other sites
© Copyright 1999-2009 LRR Technologies (Hyderabad), Pvt Ltd. All rights reserved. fullhyd, fullhyderabad, Welcome To The Neighbourhood are trademarks of LRR Technologies (Hyderabad) Pvt Ltd. The textual, graphic, audio and audiovisual material in this site is protected by copyright law. You may not copy, distribute, or use this material except as necessary for your personal, non-commercial use. Any trademarks are the properties of their respective owners. More on Hyderabad, India. Jobs in Hyderabad.