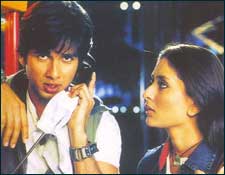 36 China Town erupts with slick casino flashers and nymphs gyrating to a loud, snappy tune. You nestle into your seat and sit cosy, knowing this flick is right on - just what you ordered. A whodunnit (again!) murder mystery, but with none of the genre's malevolence and mucho actually-makes-you-guffaw humor. Don't expect a regular whodunnit, though.

Sonia Madam (Isha Koppikar) runs the snazzy Hollywood Casino in Goa. Her little son Vicky is missing, and she, stewing in this turmoil, posts a whopper amount as reward for the informer.

Through the customary sneakiness of fate (and the thriller genre), two strangers and runaways (from home), Raj (Shahid Kapur) and Priya (Kareena Kapoor), stumble upon the lost kid. They gang up and agree to split the reward.

After a courteous call to Mighty Mum Sonia, they set out for the Czarina's opulent nest, 36 China Town. This big brave idea blows up in their petrified faces when they bump into Madam's cold corpse. Suspect No. 1 and Suspect No. 2.

Rocky (Upen Patel) is Goa's wanton Don Juan, with rose-buds stacked in the insides of his dapper coat. On the morning of the murder he calls on Sonia Madam, and the same night, is spotted venturing into the lady's boudoir, through the window. Suspect No. 3.

KK (Johnny Lever) is a sucker for gambling, and with a cocksure will, foresees his big win. This because he is blessed with a certain Gambler Baba's lucky dice (Johnny and his antics!). His distressed wife can only foresee financial doom. (Note: By now chums Raj and Priya have hooked up and are canoodling to several love songs).

Natwar (Paresh Rawal) is a reformed gambler, but gives in to the whiff of the capricious casino. KK and Natwar lose it all, including their marbles. The two couples issue a tirade against Sonia Madam. Suspect Nos. 4, 5, 6 and 7.

Inspector Karan (Akshaye Khanna) rounds up these unsuspecting suspects. This rather James Stewart-ish detective matches all the crime scene footprints to these seven jokers. Yes, jokers, 'cos that's exactly what they are.

What ensues is a comic set of fantastic fibs whipped up by the suspects and consistently soured by the detective. This is a real stumper. Who dealt the Queen Bee her last fatal card?

36 China Town is typically Hitchcockian when running in murder-mystery mode. There are intertwined stories, all of which lead the suspects to the same cursed number, 36. The movie resonates with spooky clicking door knobs, scurrying footsteps and creepy sound effects. In scattered scenes, the frame exhibits an old world feel - an Inspector in bowler hat, shadowy motions in the big house, and a body stuffed in a suitcase.

Akshaye Khanna enacts the suave, subtle yet sharp detective with supreme panache. You'll drool over Upen Patel playing the compassionate libertine. Shahid and Kareena occasionally perk up the screen with their young love. Paresh Rawal and Johnny Lever do their usual funny bits. Sleek performances all, except for the stiff Isha Koppikar.

Go see this movie, but without an academic spoon sticking in the thriller genre. The climax might not seem a worthy one, but for most part of the movie, the guy on the next seat was perched on the edge. Need one say more.
Share. Save. Connect.
Tweet
36 CHINA TOWN SNAPSHOT

Shahid is so cute

RATING
6
Arpan on 18th Jun 2006, 6:51pm | Permalink
I don't believe this! This crappy movie gets a 3 on fullHYD?! And Upen Patel! There's too much drool on this page for me to put my point across, but seriously guys! The man cannot act, dance, and doesn't look good either. And you call him a Marlon Brando! Blasphemy!
RATING
4
Lina on 9th Jun 2006, 9:41am | Permalink
the movie was great and the songs were amazing as well ... and upen patel has done really good for his debut!
RATING
10
Preeti Patel on 5th Jun 2006, 4:50am | Permalink
I luved this movie - upen baby, u looked hot as hell! i mean everything about you was mad sexxiiiiii!

ADVERTISEMENT
This page was tagged for
36 china town full movie
36 China Town hindi movie
36 China Town reviews
release date
Akshaye Khanna, Shahid Kapur
Follow @fullhyderabad
Follow fullhyd.com on
About Hyderabad
The Hyderabad Community
Improve fullhyd.com
More
Our Other Local Guides
Our other sites
© Copyright 1999-2009 LRR Technologies (Hyderabad), Pvt Ltd. All rights reserved. fullhyd, fullhyderabad, Welcome To The Neighbourhood are trademarks of LRR Technologies (Hyderabad) Pvt Ltd. The textual, graphic, audio and audiovisual material in this site is protected by copyright law. You may not copy, distribute, or use this material except as necessary for your personal, non-commercial use. Any trademarks are the properties of their respective owners. More on Hyderabad, India. Jobs in Hyderabad.