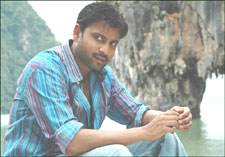 EDITOR RATING
3.0
Performances
Script
Music/Soundtrack
Visuals
NA
NA
NA
NA
Suggestions
Can watch again
NA
Good for kids
NA
Good for dates
NA
Wait to rent it
NA
Hi. I’m Chinna. If you have ever been in any jail, you’ll recognize me. I specialize in confessing to murders that I did not commit. There are 2 ways of looking at this. Both of them make me look dumb. Which I am. Sometimes I am so dumb, you just want to beat me up with the closest metal object. Go ahead and do it. I’ll confess to even that. There must be some clause in the IPC which allows you to surrender for beating yourself up.

I think it’s time for a formal introduction. But I never do anything on time, so let me ask you a simple question. If you get the answer correct, I will confess to your next 2 murders.

What is the primary pre-requisite to be a movie script-writer?

a. being creative
b. being literate
c. being born

If you answered (c), oh, we’re going to get along, aren’t we? Anyway, let me tell you about myself. I was born in a prison. It’s a bad start – statistics show that only one person per yuga born in a prison becomes famous and successful. To add to that, my mum, a prisoner, dies when I am still an infant.

The first question that will strike you now is why my was mum imprisoned. To enjoy this film (hyuk!) you should not ask the first questions that strike your mind after any scene, since they don’t have answers. So from now on, we’ll go straight to the second question.

Anyway, I am then adopted by the jailer (Chandramohan). The family raises me lovingly, but one day my foster mother accidentally kills my foster father’s brother when he is trying to rape her. I see that, and immediately take the lampstand she used from her hand, and confess to the murder.

The first question that will strike you is, what was my dad’s brother thinking, trying to rape his brother’s wife when everyone in the family is right outside the house, one scream away? So let’s skip it. The second question that will strike you is, how could my mother, who loves me so much, never reveal what happened to anyone as I spent 14 years in prison and am then refused entry back into the home due to all of them considering me a murderer born to another? Okay, from now on, we’ll move straight to the third question.

Which is good, since next we are going to talk about the woman of the movie, Anjali (Charmme). The first two times you ask the question “what is the top reason she is in this movie”, I cannot answer for reasons of decency – the people of fullhyd.com tell me this is a more-or-less respectable site which you can browse with your entire family.

Anyway, the top 2 reasons are obvious. Her 2 big ...eyes, if you insist. It just depends on your definition of “eyes”. We are very clear in our definition, and like any artistic film crew, we focus on them several times. I personally believe you should always look a woman in her eyes. And if she drops her contact lenses, you should make a 5-minute scene out of it. It shows both a good sense of humor and a high degree of innovativeness. Or at least, what you can come up with if you spend a whole one hour on writing your script.

So I become a mechanic and a neighbourhood dada, and spend my time demeaning myself trying to get back to my father and siblings, who simply don’t want me back. I will still not tell them what happened, however. Some people get their kicks out of acting like a saint even when it’s not needed. My first act of self-sacrificing saintliness was when God was giving out brains.

When I finally lose Anjali too since I refuse to clear up a misunderstanding about how I had to fight some goons, despite a promise made to her, to save my brother’s life, you will be prompted to decide I deserve my fate. Well, all I can say is, you are not being self-sacrificing enough. Which is a noble act – calling this a lousy movie and costing us audiences, or deciding to help us make money for our efforts by keeping quiet about your suffering? Did you learn nothing?

Some people would say this is a complete formula film with standard elements of the Telugu films of yore – an all-sacrificing holier-than-thou hero, every character in either black or white, a heroine whose role has to be forced into the film since all we need her for is her flesh, 4 fights and 5 songs, and a comedy track (involving Ali here) which would look ridiculous if it were not for the popular faces that appear in it. As far as answering these charges goes, I might as well emigrate to Neptune.

The film has no sleek look, great lines or zingy music either. Go ahead, be a martyr. The next time someone asks you if you have led a selfless life, you can at least look that person in the eyes. The real eyes, I mean.
Share. Save. Connect.
Tweet
CHINNODU SNAPSHOT

ADVERTISEMENT
This page was tagged for
chinnodu feel videos sense
Chinnodu telugu movie
Chinnodu reviews
release date
Sumanth, Charmme
Follow @fullhyderabad
Follow fullhyd.com on
About Hyderabad
The Hyderabad Community
Improve fullhyd.com
More
Our Other Local Guides
Our other sites
© Copyright 1999-2009 LRR Technologies (Hyderabad), Pvt Ltd. All rights reserved. fullhyd, fullhyderabad, Welcome To The Neighbourhood are trademarks of LRR Technologies (Hyderabad) Pvt Ltd. The textual, graphic, audio and audiovisual material in this site is protected by copyright law. You may not copy, distribute, or use this material except as necessary for your personal, non-commercial use. Any trademarks are the properties of their respective owners. More on Hyderabad, India. Jobs in Hyderabad.