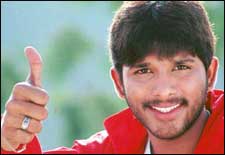 Mithun Verma / fullhyd.com
EDITOR RATING
7.0
Performances
Script
Music/Soundtrack
Visuals
NA
NA
NA
NA
Suggestions
Can watch again
NA
Good for kids
NA
Good for dates
NA
Wait to rent it
NA
Arya is not at all what you expect it to be.

It is a special package that consists of fun, entertainment, laughs, frolic, merriment, high times, bashes and more. It has them all. Romance, eternal love, mush, flowers, embraces, sacrifices, sunsets. It has them ALL. Action, fights, stunts, feats, tricks, battles, blood, bullies, henchmen, chases. Did we mention that this has it all? Emotions, sentiments, passion, craze and feelings. See one. See all. The makers are dying out there for that!

Geeta (Anu Mehta) has this recurring dream about an incident that changed her life. When she had gone to Kanyakumari, she accidentally dropped her anklet in the water. To teach the roadside punks a lesson, she challenges anyone to go fetch the anklet if they really love her (Geeta, not the anklet). Immediately some guy jumps into the ocean.

That's probably because he could not stand her acting skills anymore. But Geeta regrets the fact that she was responsible for his death. She probably was, but in the way that she thinks. Whatever.

Cut back to college where Geeta is corned into telling Ajay (Siva) that she loves him because he threatens to kill himself otherwise. So starts the relationship between Ajay and Geetha. But as you can see, she never really loves Ajay, she just tags along.

Enter Arya (Allu Arjun, thankfully a little rugged), the exuberant little livewire, who wins over everybody with his expressiveness and openheartedness. Big words to describe a small man. But this guy is big at heart. There, all small words. For Arya, it is a small world, too - Geetha.

Yup. Arya is madly in love with her. He becomes madder when he confesses it to her in the vicinity of her boyfriend (Ajay). Just as we're expecting the movie to turn violent, it turns violently unpredictable.

Even after smashing your skull against a sledgehammer for quite sometime you can't imagine that this could be happening in a Telugu movie. Arya actually reasons it out with Ajay. If Ajay loves Geetha and Geetha loves Ajay, then why should any Arya bother him? Doesn't he trust his love even that much?

So starts the offbeat love story. Constantly reminding Geeta that she need not feed the love back, Arya, takes her and us into believing in the magical mirage of selfless love. But here's the freshness quotient. Geeta never really loves him.

In fact, she finds his mamby-pamby happiness highly annoying. But when Ajay's MP dad fixes his wedding (Ajay's, not the dad's) with someone else, it's Arya who stylishly prepares some henchmen Sushi, helping Ajay and Geeta to get away.

It is in this period that Geeta begins to realize the intensity of Arya. The person who once she thought was a dorky freakazoid is so precious to her now, that she actually loves imitating him. And eventually, the story ends the way any love story would.

For someone whose fame to claim is the 100th movie of a producer whose movies look a century old, Allu Arjun has pulled out a blinder this time. Arya's vibrancy and contagious effervescence are not easy for any actor, leave alone a new kid on the block. Allu Arujun completely manages to charm you with his endearing role.

Now for his dancing abilities. This guy is the best dancer around in the industry today. Yup, even better than NTR Jr. He can break and extreme dance like no one before. Having Megastar in the family does help, it seems.

But this is possible because of some great choreography and even greater music. Devi Sri has again given a couple of brilliant songs in the movie. His exhilarating background score during the action sequences pumps in gallons of adrenaline.

Arya will do to Anu what Nuvvu Naaku Nacchaav did to Aarti Agarwal. But we all don't want her to bloat to the size of Aarti, causing solar eclipses. She's good just as the chubby version of Katrina. Siva Balaji as Ajay is definitely better in this one than the summer suicide, Dost.

The real star, however, is Sukumar (director). His camera angles, the taking, the fresh feel and the treatment are all spectacular. One hell of a debut, dude!

In all, Arya doesn't shove his stuff in our face (figuratively speaking, of course). He subtly gives us an idea of his presence, and the show just breezes along.

PS: Do we have to tell you who the guy was, that jumped into water?
Share. Save. Connect.
Tweet
ARYA SNAPSHOT

See Arya full details
ARYA USER REVIEWS
1 - 15 OF 17 COMMENTS  |  NEXT  |  LAST
POSITIVE  |  NEGATIVE |  NEWEST  |  OLDEST  |  MOST HELPFUL  |  LEAST HELPFUL
USER RATING
8.5
147 USERS
Performances
Script
Music/Soundtrack
Visuals
NA
NA
NA
NA
Can watch again - NA
Good for kids - NA
Good for dates - NA
Wait to rent it - NA
sathish626262 on 28th Feb 2015, 6:59pm | Permalink
arya movie is excellent and sukumar direction was superb and dsp music and between allu arjun shivabalaji comedy dialogues and anuradhamehatha excellent fellings + point of this movie thankyou i love sukumar and arya and anuradhamehatha
Kalyan Dhaytonde on 31st Oct 2007, 11:20pm | Permalink
Arya is very good movie & i saw this movie 15 times. I'm not understand telugu but this movie's touch to my heart.
RATING
10
Kunal Londhe on 22nd Jul 2007, 1:04pm | Permalink
very good movies
RATING
10
Pandu on 20th May 2007, 10:17am | Permalink
Why compare this guy's monkey dance to NTR's dance. NTR dancing with his weight is a big thing. Imagine how JR would rock if he shed that weight.
RATING
2
Muni on 25th Aug 2006, 6:52am | Permalink
Good film.
RATING
10
Ashish Chatterjee on 26th May 2006, 12:15pm | Permalink
I dont know but the imagination or director was really nice wrt to the performance of all members part of the movie.

cheers you will love it guys

ADVERTISEMENT
This page was tagged for
Arya Telugu picture 1
Arya Telugu
arya Telugu movie college scene 2 bats one cock download
Arya telugu movie love fellings
Arya Telugu movie rating
Follow @fullhyderabad
Follow fullhyd.com on
About Hyderabad
The Hyderabad Community
Improve fullhyd.com
More
Our Other Local Guides
Our other sites
© Copyright 1999-2009 LRR Technologies (Hyderabad), Pvt Ltd. All rights reserved. fullhyd, fullhyderabad, Welcome To The Neighbourhood are trademarks of LRR Technologies (Hyderabad) Pvt Ltd. The textual, graphic, audio and audiovisual material in this site is protected by copyright law. You may not copy, distribute, or use this material except as necessary for your personal, non-commercial use. Any trademarks are the properties of their respective owners. More on Hyderabad, India. Jobs in Hyderabad.