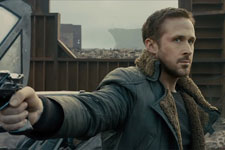 T J Reddy / fullhyd.com
EDITOR RATING
8.0
Performances
Script
Music/Soundtrack
Visuals
9.0
8.0
9.0
10.0
Suggestions
Can watch again
Yes
Good for kids
No
Good for dates
Yes
Wait for OTT
No
As I walked out of Blade Runner 2049 and performed my usual ritual of looking up at the big screen one last time before I exited the hall, I had to ask myself a couple of questions before framing the review. How influenced was I by the original and its near mythical status? Are the ideas I'm going to be expressing mine alone or were they implanted into me by the many voices in the cinema hall callously throwing their opinions around?

What started with those slowly morphed into me asking some deeper questions of myself. Are any of my ideas or my identity a product of my environment or a product of who I am internally? Can any of us ever really know the answer to that question? And am I going to rate this film higher because it transported me to a state of questioning my humanity/identity or am I rating it higher because it deserves it?

See what good sci-fi does.

To paraphrase Leo Dicaprio in Inception: Once an idea is introduced, it morphs and builds but can never be wholly eliminated. And to quote V: Ideas are bulletproof. Blade Runner 2049 is an amalgamation of many such ideas that are bound to create existential crises in those brave enough to wither its slow first half.

Narrating a story while making you ask questions of yourself is director Denis Villeneuve's ambitious follow-up to 1982's Blade Runner. His film begins with Ryan Gosling's K going about his job eliminating obsolete Nexus-8 replicants - the film acknowledges non-fans of the original by explaining basic vernacular such as replicants and Blade Runners - one such replicant is the imposing and engaging Sapper Morton (Dave Bautista).

As a quick synopsis that doesn't ruin much of the film (respecting one of my favourite directors' wishes here): K's altercation with Morton leads him on a trail of discovery. He begins to question his purpose and the true power the old Nexus-8 models possess when not being oppressed by their human masters. Aided by the undying faith of his holographic girlfriend Joi, K sleuths around the desolate landscapes of 2049 Los Angeles aiming to discover his purpose and the specifics of his origin while masquerading these intentions by pretending to comply with his superior's orders of finding and eliminating an anomaly amongst replicants.

While the story itself is extremely engaging owing to every scene and interaction working as an excessive yet carefully crafted piece of a beautiful mosaic, the enduring impact Blade Runner 2049 leaves on you is with the questions it dares to ask while employing you to find your own answers to those questions.

However, my experience with this film is wholly mine. I am not blind to the fact that the film's pacing, akin to those of movies of a bygone era, is bound to put off many a viewer. Neither filmmaker or filmgoer are at fault here as cinema has evolved multiple times since 1982, and a film that chooses to ape its predecessor's futuristic neo-noir styling falls short at the exact same avenue.

As mentioned above, the movie has a wealth of ideas, themes and morals to offer up in exchange for patience. Blade Runner 2049 adds onto the singular thematic conflict of what it means to be human put forth by its predecessor, by deftly navigating between the evils of surrounding yourself by a lonely echo chamber, the beauty of sentience and how once achieved it can never be rolled back, the palpable fear of humans and their penchant for rejecting new avenues of evolution for fear of being replaced, the urge to be a part of a cause while still preserving the need to feel like you're not just a disposable soldier, and so forth, with the highest of ease and care. My thanks go to the writers (the forgotten heroes) for crafting a narrative that never falls like a deck of cards when one plot point is pulled for deeper investigation.

The words however are only as good when those speaking them are bringing their A-game. Ryan Gosling's steely yet pained determination coupled with a rejuvenated child-abandoning Harrison Ford (why do you do this, man - first Star Wars and now this?) are tailor-made for this film. Gosling's desires, outbursts and actions have a bit of the mechanical attached to them, and that there is clever direction as it helps in selling the reality of his conflicts.

Ford's Deckard is infinitely more engaging this time around, but overshadowing both leading men is relative newcomer Ana De Armas as Joi. Playing a much-advanced version of Scarlett Johansson's Samantha in Her, De Armas grounds the film by ironically adding the most humanity to a movie while being the least human character. While Jared Leto is quite interesting in his limited time on screen, his right hand woman Luv (Sylvia Hoeks) steals scenes she's in by mirroring K's conflicts by possessing all of the same desires with none of the humanity.

Capturing these conflicts and deeply personal stories is 13-time Oscar-nominated visionary cinematographer who primarily dictates modern cinema's visual language, the incomparable Roger Deakins. Bolstered by the impeccable work of the production design crew, the film's eerie dystopia feels as if it is not quite far away. There is not much I can say here in terms of praise except if Deakins does not win his first Oscar this year for this hypnotically-shot gorgeousness, I will start a riot.

Going hand in hand with the visual spectacle is the score composed by Hans Zimmer and Benjamin Wallfisch. The iconic original score by Vangelis is incorporated and improved upon in leaps and bounds by the duo who synthesize unromantic, cold notes of music to mirror the desolate landscape and its characters with calculating precision.

As most of you may have noticed, this review is neither too funny nor is it too high on references to pop culture. Simply put, staggering intelligence like the one presented in this motion picture is what stops me from doing so. It dawns on me that I'm yet to achieve a level of narrative, visual, musical or performing standard with any of my personal works as this film and its crew attain with every frame. All I can do is sit back with quiet admiration while applauding its brilliance, and learning from it.

Denis Villeneuve quite simply goes on with his work by adding another great film to his enviable repertoire. And Philip K Dick is looking down from the heavens above appreciating what his work has led to. 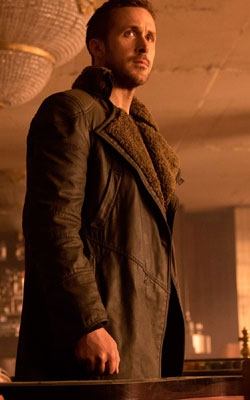 See Blade Runner 2049 full details
BLADE RUNNER 2049 USER REVIEWS
1 - 1 OF 1 COMMENTS
POSITIVE  |  NEGATIVE |  NEWEST  |  OLDEST  |  MOST HELPFUL  |  LEAST HELPFUL
USER RATING
4.0
1 USER
Performances
Script
Music/Soundtrack
Visuals
7.0
5.0
8.0
10.0
Can watch again - No
Good for kids - No
Good for dates - No
Wait for OTT - Unsure
The Common Movie Goer on 10th Oct 2017, 8:02pm | Permalink
Great review, TJ! Agree with you on every point except for Jared Leto being interesting. I didn't think he was asking any new questions that weren't already being implied elsewhere in the movie, and his exposition kind of lessened the impact of the themes being explored.

That said, the pacing just didn't sit well with me. I felt from you review that you had an intensely emotional experience, and I felt all that and more watching Arrival. Sicario as well, but the adrenaline was so high that it made for a completely different experience. I found Villeneuve's Enemy a better film compared to 2049, and it was challenging on the grey cells. This one wasn't.

Not watching the original probably impacted my viewing experience. I hope the upcoming Ragnarok, JL, and Star Wars (trailer is amazing) films all live up to the hype. This could turn out to be a great year for Hollywood movie watching.
RATING
4
TJ Reddy on 10th Oct 2017, 9:40pm | Permalink
The thing with Leto's character was that I saw the 3 short films leading up to this. He is a bit more developed thanks to that. Was actually excited to see him in action.

The main problem with the film is its pacing. The movie is glacial for the first hour and it kind of kills audience investment even though the film explores heady themes like every other Villeneuve film. Once you feel a drag, the film just stops working. I've seen that happen with a lot of people in my theatre too.

For me, I like meditative films as long as they have a point. I liked Silence a lot for this exact reason. Again not a film for everyone but if it hooks you it really won't let you go.

But I see your side of things too TCMG.

We could discuss and dissect this film for ages but I don't want to spoil it for the other readers.

BTW. I'm kind of scared for Justice League. Those trailers while fun has serious technical problems. Ragnarok looks fun because of its director. He's a good pick. The Last Jedi's new trailer was intriguing.

My recommendation for you would be to watch Three Billboards Outside Ebbing Missouri.
The Common Movie Goer on 11th Oct 2017, 11:28am | Permalink
OMG, 97% on Rotten Tomatoes? Thanks for the reco, TJ! I'll check it out.

Well, BvS sucked for me. And WW was one of the best I'd ever seen. Hoping it's closer to WW than BvS.
TJ Reddy on 11th Oct 2017, 4:13pm | Permalink
If you don't know the director's previous work, I highly recommend watching In Bruges and Seven Psychopaths.

BvS worked for me in a few avenues. The storyboarding and visual storytelling were great. The narrative was wonky and the lack of levity threw it off the ledge. Civil War has a horribly convoluted and nonsensical story too but its light tone worked in its favor.

ADVERTISEMENT
This page was tagged for
Blade Runner 2049 english movie
Blade Runner 2049 reviews
release date
Ryan Gosling, Harrison Ford
theatres list
Follow @fullhyderabad
Follow fullhyd.com on
About Hyderabad
The Hyderabad Community
Improve fullhyd.com
More
Our Other Local Guides
Our other sites
© Copyright 1999-2009 LRR Technologies (Hyderabad), Pvt Ltd. All rights reserved. fullhyd, fullhyderabad, Welcome To The Neighbourhood are trademarks of LRR Technologies (Hyderabad) Pvt Ltd. The textual, graphic, audio and audiovisual material in this site is protected by copyright law. You may not copy, distribute, or use this material except as necessary for your personal, non-commercial use. Any trademarks are the properties of their respective owners. More on Hyderabad, India. Jobs in Hyderabad.