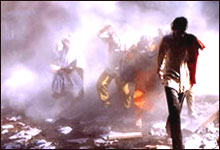 Samrat Sharma / fullhyd.com
EDITOR RATING
8.0
Performances
Script
Music/Soundtrack
Visuals
NA
NA
NA
NA
Suggestions
Can watch again
NA
Good for kids
NA
Good for dates
NA
Wait to rent it
NA
There are some films that are made for us. Not for making money, nor for the director's pride or presumptuousness, but because the story deserves to be told, and brought to the people in a medium that pervades our pop-culture consciousnesses the most - Cinema.

After a more than 2-year wait, and a lot of bated breaths from Anurag Kashyap, his tour-de-force is finally out. Decidedly low key in its demeanor and initial presentation, this is a film that wants to be watched. Simply because this is a story that you should know.

The idea for a film about the Mumbai (Bombay, then) serial bomb blasts in 1993 initially seemed like capitulation on the hurt that still possibly remains in Mumbaikars' hearts. At the very least I feared a jingoistic exploration of the truth while deifying the investigative team. A 10 out of 10 to Kashyap, then, in originality and cinematic honesty, as he keeps a tight control over the visual language of the film and tells a story of real characters in the most authentic and unflinching manner he could.

The story is told in a documentary style, always close to but never with, the key players of the story. Based on S Hussain Zaidi's book, Kashyap takes us on a journey through the underbelly of crime to the top level perpetrators' minds and the massive investigation that followed the blasts. A detailed account of how it all happened, with enough character moments thrown in to make sure you don't feel this is a history class. It is a testament to a strong direction and top-notch screenplay that all the human moments and asides seem entirely plausible and supremely convincing.

There is a huge risk, not only in the subject matter of the film, but also structure in that the film eschews all conventions of a beginning, middle and denouement. Despite all that you fear, the risk pays off handsomely, so much so that I can't imagine another film on a similar subject made in any other way. There are strong parallels to European cinema in the cinematic language of the film, but even much more mainstream. It also seems to have a lot in common with the way Munich was constructed, but in the end it remains a wholly original voice that stands out, largely because of the way it unflinchingly represents the Indian milieu.

The way the men talk - and note that this is a largely male-dominated film - behave, act and stare, reminds you of the recent spate of RGV films, but strangely enough, it feels even more real, cutting down on forced bravado and injecting a vulnerability in even its most heinous characters. The authenticity in the film does not rely on set pieces to recreate the events, but on its characters.

Kay Kay Menon as the investigating officer in charge is not just convincing, he is ACP Rakesh Maria. The character may have some moments for the sake of pacing, or to make him more identifiable to the audience, but it is such an authentic portrayal, you root for him to come back even though he dominates the proceedings.

Aditya Srivastava proves that he is an underrated actor for our times. The places he takes his Badshah Khan are astonishing. It's a transformation of the man from the beginning of the film to the ending, and he handles it gradually and with gravitas.

Pavan Malhotra as Tiger Memon may get a lot of flak for being somewhat over the top, but that robs him of the understanding he displayed of Memon. A man who needs to convince an entire posse to do something thoroughly shaking and entirely mad needed a man who was a bit dramatic, yet grounded. This is a great performance, and should not go overlooked.

A story like this has the makings of a taut thriller, but at a little less than 3 hours, Black Friday isn't that. The problem comes later in the second half, which feels a bit slow, and you can see Kashyap's vice-like grip loosening a bit. The film takes a turn from being an exploration to a procedural, and trust me, it's not that. The overuse of archival footage could have been avoided to give it a more raw appeal, but even so, this remains one of the most complete films I have seen this year.

The cinematography is seedy, in your face, grainy and everything else that the story requires it to be. The film's evocative cinematography is all the more impressive when you realize that for all the interesting trickery, it never overshadows the proceedings, but accentuates it. The editing is slightly loose in some segments later on, but remains tight overall. Nikhil Advani should be given Aarti Bajaj's phone number, really.

With about 20 minutes shorn, Black Friday could have been the best Mumbai film. Yet, even as it stands, it's tantalizing cinema, a movie that indulges itself briefly, yet presents a story for you, and you alone. This is a film that needs to be seen because it's talking about us and our times right now, and all the questions it poses us, and the answers we give, will be defining the country for the rest of the century. To say that this is the most important film released this year may be an understatement.
Share. Save. Connect.
Tweet
BLACK FRIDAY SNAPSHOT

ADVERTISEMENT
This page was tagged for
Black Friday hindi movie
Black Friday reviews
release date
Kay Kay Menon, Pavan Malhotra
theatres list
Follow @fullhyderabad
Follow fullhyd.com on
About Hyderabad
The Hyderabad Community
Improve fullhyd.com
More
Our Other Local Guides
Our other sites
© Copyright 1999-2009 LRR Technologies (Hyderabad), Pvt Ltd. All rights reserved. fullhyd, fullhyderabad, Welcome To The Neighbourhood are trademarks of LRR Technologies (Hyderabad) Pvt Ltd. The textual, graphic, audio and audiovisual material in this site is protected by copyright law. You may not copy, distribute, or use this material except as necessary for your personal, non-commercial use. Any trademarks are the properties of their respective owners. More on Hyderabad, India. Jobs in Hyderabad.