All I Want Is Everything Review 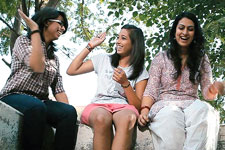 Kritika Deval / fullhyd.com
EDITOR RATING
3.0
Performances
Script
Music/Soundtrack
Visuals
4.5
2.0
5.0
4.0
Suggestions
Can watch again
No
Good for kids
No
Good for dates
No
Wait to rent it
No
Ooh! An indie girl-bonding flick, or, womance (nah, that sounds wrong), that's been doing the rounds of film festivals, released on International Woman's Day to boot! Sounds great, right? Not quite.

All I Want Is Everything is just as chaotic as is suggested by its title. And, it is everything you fear from an indie film by a debutant director. Self-righteous, superficial, and amateurish, Shital Morarjia takes on way too much, much too soon.

Not that it doesn't mean well. Good intentions shine through every fault-line in the shaky premise and plot, which is as follows.

Nidhi (Sampada), Vaijayanthi (Sagari) and Trisha (Iantha) are three girls who are new to Hyderabad, and meet at a film appreciation class. They go on to become the best of friends over a rather confusing timeline. After all, it's a 60-minute movie, which gives them about 20 minutes to go from strangers to BFFs.

All three of them have demons to deal with. Vaijayanthi is torn between her conservative south Indian family, a difficult boyfriend, and her dream of becoming a filmmaker. Nidhi is a closet homosexual. And the ever-ebullient Trisha has serious abandonment issues.

The rest of the movie... wait, there is no rest of the movie. This just is a really long short film that takes bits and pieces of all possible issues women in contemporary urban India have, mixes them up, and presents them all in as perfunctory a manner as is possible with three young girls involved. Acting that belongs in a school stage play further compounds the problem.

And then is the dialogue with all of its badly crafted puns, just to show that girls can have fun too. Not to mention the unintentional giggles you get when they're not trying to be funny ("That is my package," yells Trisha, "none of you are getting anything from my package.").

All I Want Is Everything is so sincerely insincere in its approach to the issues it handles that they don't touch you one single bit. Everything, right from Nidhi's struggles with her sexuality to Vaijayanthi's unwanted pregnancy has answers that are too pat.

If the plot didn't drag so much, or the movie didn't look so bad, we'd have said that it would've benefited from at least half an hour more of a runtime.

The camera work shows every paisa of the film's super-low budget. The screenplay is ineffective and flow-chartish.

There is one song in the movie that is rather pleasant, but it won't remain with you for too long.

An Indian girl's answer to Dil Chahta Hai, this one most certainly is not. It is, however, a beginning.
Share. Save. Connect.
Tweet
ALL I WANT IS... SNAPSHOT
ALL I WANT IS EVERYTHING SNAPSHOT 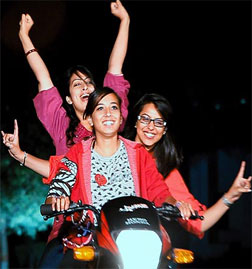 ADVERTISEMENT
This page was tagged for
All I Want Is Everything english movie
All I Want Is Everything reviews
release date
Sampada Harkara, Sagari Venkata
theatres list
Follow @fullhyderabad
Follow fullhyd.com on
About Hyderabad
The Hyderabad Community
Improve fullhyd.com
More
Our Other Local Guides
Our other sites
© Copyright 1999-2009 LRR Technologies (Hyderabad), Pvt Ltd. All rights reserved. fullhyd, fullhyderabad, Welcome To The Neighbourhood are trademarks of LRR Technologies (Hyderabad) Pvt Ltd. The textual, graphic, audio and audiovisual material in this site is protected by copyright law. You may not copy, distribute, or use this material except as necessary for your personal, non-commercial use. Any trademarks are the properties of their respective owners. More on Hyderabad, India. Jobs in Hyderabad.