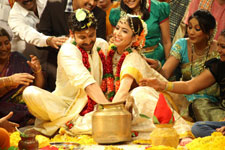 Pranita Jonnalagedda / fullhyd.com
EDITOR RATING
3.5
Performances
Script
Music/Soundtrack
Visuals
5.0
3.0
4.0
5.0
Suggestions
Can watch again
No
Good for kids
No
Good for dates
No
Wait to rent it
Yes
Emo Gurram Egaravachu, or "who knows, a horse could fly" in Telugu, comes from the director of Aa Naluguru. Naturally, the hopes on it are high, and there is the assumption that the movie will have some sort of a social message, and that it will be worth a watch.

But that's where we will tell you to halt your thought process. Because far from "flying", this horse has had a lot of difficulty even getting up and walking. Maybe it jumped occasionally, but then each time, it fell with a thud, and in the end, it fell flat - on our faces.

Emo Gurram Egaravachu is a rather predictable story of an "innocent" village lad, Bullabbayi (Sumanth), and his maradalu, Neelaveni (Pinky Sawika), a "modern", "arrogant" America-returned girl. They get married - Bullabbayi marries for a chance to go to USA, and Neelaveni, because her parents are coaxing her to get married and Bullabbayi's "innocence" will be an easy way out.

They make a deal that the marriage will last for just 2 months, after which they are free to go their separate ways, i. e., Bullabbayi will go back to India, and Neelaveni will marry a man who she feels is a "suitable" match for her.

Interesting though the conflict of attention is, it seems too outdated. We have seen this story several times. It has been cut, copied and pasted in different ways, and that feeling of deja vu lurks right from the early portions of the movie.

The film is also reminiscent of other movies - the Akshay-Katrina starrer Namastey London and Sivaji starrer Mr. Errababu, to name a few. And the list could go on.

The biggest problem with this movie is that it never manages to draw the attention of the audience at any point, in its entire length. Added to that is the poor screenplay. It's like a random cat-and-mouse game - you don't understand what crops up, and from where and why. It seems that gaps were filled with unconnected, random sequences, just for the heck of it.

The screenplay is paired with sloppy direction. This movie isn't something one would expect from an award-winning director like Chandra Siddhartha. It makes us wonder what he was doing anywhere around this film. Was it a vacation he took from filmmaking? Only he would know.

The movie's flaws aren't limited to just the plot and the writing. Sumanth is an actor with a great potential, but the director does not bring out his best. We have mostly seen and appreciated Sumanth in roles that require him to be urbane, mature and suave. However, this movie comes as a surprise, as he plays the role of a "14-times-10th-class-failed" villager. He plays the role to near perfection, but his East Godavari accent plays spoilsport, and looks unreal and mocking. Sumanth dressing up as a woman, in a song, is probably the only high point in this bucket full of flaws.

Next in line is Pinky, who makes Neelaveni feel like a beautiful Barbie doll that cannot emote. Despite her efforts to pull off the Telugammayi look, she fails. Adding to the viewer's woes is the lip sync, that is never in sync. It does become irritating because your entire attention is on her lips, and you wonder whether something is stuck in her mouth or whether her lips are partially glued.

The rest of the cast has been wasted, except for Taagubothu Ramesh, who manages to draw a few guffaws.

Keeravani's music is good, but nothing to rave about - you aren't going to be humming any of the tunes while you walk out of the theatre. The same can be said about the background music, which doesn't draw your attention. However, credit goes to Keeravani for boosting certain scenes with his music.

The locations proved to be disappointing, especially in the second half, when we are being shown what is supposedly USA - we have our doubts if it was actually shot there. Also, the first half, that was shot in a village, neither explored the beauty of a rural setting, nor felt truly rural.

Despite the outdated theme, Emo Gurram Egaravachu could have been a treat to the eyes if the director had made some effort to focus on the details.
But as of now, this film is an obsolete, run-of-the-mill production that you can easily miss.
Share. Save. Connect.
Tweet
EMO GURRAM EGARAVACHU SNAPSHOT

ADVERTISEMENT
This page was tagged for
Emo Gurram Egaravachu telugu movie
Emo Gurram Egaravachu reviews
release date
Sumanth, Pinky Savika
theatres list
Follow @fullhyderabad
Follow fullhyd.com on
About Hyderabad
The Hyderabad Community
Improve fullhyd.com
More
Our Other Local Guides
Our other sites
© Copyright 1999-2009 LRR Technologies (Hyderabad), Pvt Ltd. All rights reserved. fullhyd, fullhyderabad, Welcome To The Neighbourhood are trademarks of LRR Technologies (Hyderabad) Pvt Ltd. The textual, graphic, audio and audiovisual material in this site is protected by copyright law. You may not copy, distribute, or use this material except as necessary for your personal, non-commercial use. Any trademarks are the properties of their respective owners. More on Hyderabad, India. Jobs in Hyderabad.