1. I had ENOUGH just after seeing the trailer,
2. It's all ENOUGH to make you become violently ill,
3. The film is so long, you'll be screaming "ENOUGH!" way before it's over...

But we're not the kind of rag that would do such a low thing, are we? Well, so here goes. Jennifer Lopez is a hardworking waitress at the Red Car Diner who sports a nametag that reads "Slim" - a fun nickname if only it wasn't mentioned in every line. One day, a stranger Mitch (Billy Campbell) comes to Slim's defense when a rose-toting womanizer tries to misbehave, and before you know it, they're in love, getting married, buying a house and raising a family.

But when Slim figures out her perfect husband Mitch is having an affair and confronts him about his cheating ways, he becomes violent, possessive, controlling and starts to beat the stuffing out of her. Slim tries to leave him but can't, and is forced to take desperate measures to save her and her daughter Gracie's (Tessa Allen) life. Didn't Julia Roberts already go through all of this a while back? Didn't Ashley Judd try it even more recently than that? 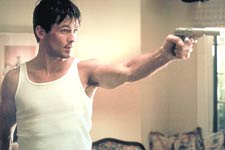 There are too many things that don't add up in this rather atrocious rip-off of Sleeping With The Enemy. For instance, Slim's nonsensical choice to leave her husband in the dead of the night rather than when he's at work, or how she hides all the guns in his house before she prepares to fight him, never considering that he may actually have a weapon on him. Then, although Mitch displays some creepy, possessive traits at the start of their marriage, his pattern of abuse isn't believable and is not typical of a wife-beater.

Continuing, Slim's eyeliner, lip-gloss and whatever else she's sprouting remain perfect through every punch and kick. Too often director Michael Apted and screenwriter Nicholas Kazan are so interested in the requirements of their conventional plot that they forget to concentrate on the authenticity of the characters and the seriousness of the situation they are in. 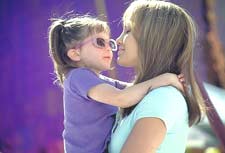 Jennifer Lopez does just about enough to evoke a "you-go-girl" response from the audience, and Mitch does come across as a heartless, abusive, husband. The best performance comes from Tessa, who plays the difficult part of a 5-year-old child admirably.

The most disappointing aspect of the movie is the fact that once you see the trailer, you basically know how the entire film will unfold. As the story specifics increasingly strain the breaking point of plausibility, you are left to patiently wait around for an ending that has been plainly telegraphed in all of the promotional trailers and ads. 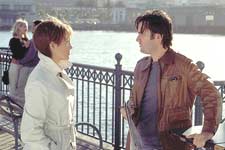 Enough deals with a very sensitive subject - one that is very real and that poses serious questions. For instance, what resources are there for women who are trying to start over in their lives? Sadly, the only suggestion the film throws out is the notion of "Self defense isn't murder". The movie says that if you are strong enough, disciplined enough and willing to learn keen self-defense tactics, you can fight back and win. Had the film focused more seriously and realistically on the danger of spousal abuse and its repercussions, it might have made a powerful impression.

ADVERTISEMENT
This page was tagged for
Enough english movie
Enough reviews
release date
Jennifer Lopez, Bill Campbell
theatres list
Follow @fullhyderabad
Follow fullhyd.com on
About Hyderabad
The Hyderabad Community
Improve fullhyd.com
More
Our Other Local Guides
Our other sites
© Copyright 1999-2009 LRR Technologies (Hyderabad), Pvt Ltd. All rights reserved. fullhyd, fullhyderabad, Welcome To The Neighbourhood are trademarks of LRR Technologies (Hyderabad) Pvt Ltd. The textual, graphic, audio and audiovisual material in this site is protected by copyright law. You may not copy, distribute, or use this material except as necessary for your personal, non-commercial use. Any trademarks are the properties of their respective owners. More on Hyderabad, India. Jobs in Hyderabad.