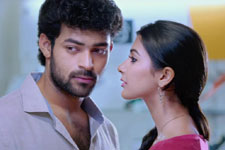 Kritika Deval / fullhyd.com
EDITOR RATING
5.5
Performances
Script
Music/Soundtrack
Visuals
5.0
4.5
6.5
6.0
Suggestions
Can watch again
No
Good for kids
Yes
Good for dates
No
Wait to rent it
Yes
There's only so many politically inclined movies backed by politically inclined families you can watch before your paranoia inclined brain starts smelling conspiracy. However, this is Tollywood and we're in Hyderabad, so a gorgeous boy popping his thespic cherry with a violent crusade rather that a jolly good romance has apparently become par for the course. Thus, we have Mukunda, a film about a college kid's battle against a politician that, despite all of writer-director Srikanth Addala's efforts at otherwise, leaves you dissatisfactorily convinced that, had this movie not had this hero or this schedule or this director or this something, you might have gotten a movie you'd want to watch again.

As for the story, Mukunda (Varun Tej) is a college kid who gets into trouble with the municipal chairman (Rao Ramesh) because his friend falls in love with the evil chairman's niece. The chairman goes after the hapless friend's life, and Mukunda decides to retaliate by bringing him down. Our resourceful hero then decides that the best way to do this would be to pit an eloquently idealistic hobo (Prakash Raj) against the chairman and have the hobo. Oh, and he also decides to fall in love with the chairman's nubile young daughter (Pooja Hegde).

As you can see, this is an insane premise that could've begotten an equally insane movie, but then the makers seem to have realized that this film must be a "commercial" success about halfway into making it, giving us a film that straddles uncomfortably the line dividing what is expected to entertain and what actually does entertain. Either way, what you end up watching are a set of decent dialogues spoken convincingly by a few people who seem to be doing a different film, punctuated by fight scenes that are as superfluous as they are badly done.

Rao Ramesh has the privilege of being the baddie, apparently the only mainstream Tollywood flat character allowed to actually enjoy their performance, and he takes full advantage of it, pitching his dialogues with precision and wielding his facial muscles with skill. Prakash Raj, on the other, does put all of the heart that only he possesses into his role, but is defeated in his endeavour by a character with all the depth of a bowl... turned the other way round (what, did you think we're stupid?).

Varun Tej, in stark contrast to these veterans, shows every bit of his inexperience, making a distressingly shallow impression despite all of his well-publicized 6 feet and 4 inches. He looks terribly good, but that doesn't make up for how uncomfortable he is on screen or his awkwardness in the music videos or even the fact that his face doesn't quite seem capable of emoting. However, one must keep in mind that all Addala seems to require from Varun Tej are the utterly mindless heroics that don't much require emoting. Pooja Hegde looks enchanting, and has a beautifully designed wardrobe, especially in all of those beautifully shot songs that the director shoehorns into the screenplay wherever the fancy hits him.

Bramhanandam, Ali and the rest show up as usual, and leave without making nary an impact, which is not as usual.

The cinematography is well done, making the best of all of the film's beautiful locations. The choppy screenplay, however, mars what would otherwise have been a fun watch. The editing department seems to have phoned it in, with cuts in the oddest of spots, not to mention the oddly placed songs. Mickey J Meyer's songs are hummable and might stick around in your head for a while.

Mukunda is that rare thing, a debut platform for a scion of Tollywood royalty that shows substance beyond the spectacle of it all. Too bad the substance wasn't quite allowed to rule the roost.
Share. Save. Connect.
Tweet
MUKUNDA SNAPSHOT 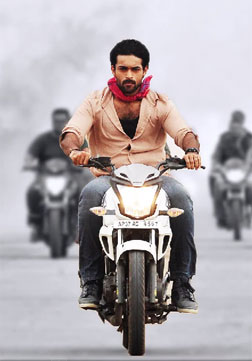 See Mukunda full details
MUKUNDA USER REVIEWS
1 - 2 OF 2 COMMENTS
POSITIVE  |  NEGATIVE |  NEWEST  |  OLDEST  |  MOST HELPFUL  |  LEAST HELPFUL
USER RATING
3.0
1 USER
Performances
Script
Music/Soundtrack
Visuals
NA
NA
NA
NA
Can watch again - NA
Good for kids - NA
Good for dates - NA
Wait to rent it - NA
Rajshekhar on 17th Jan 2015, 10:30pm | Permalink
half baked movie and a very lame story which tests your patience to sit throughout 120 minutes
RATING
3
Murali Krishnan on 4th Jan 2015, 5:36pm | Permalink
I am new to Fullhyd, and i am pleasantly surprised at the reviews that are spot on! You guys have an affinity for articulating my thoughts about this crappy crop of movies. Tollywood movies make no sense. Interestingly, every Telugu speaking human with a proper pulse, knows this fact too. Telugu movies have crappy scripts, crappy lead kid actors and nonsensical song & dance, fight and comedy routines that simply have been farted out the rear end. If the same crap is done by bigger banners that can afford NTRJr, Allu, Balakrishna, Pawan then the quality of the film and locales maybe better, but at the end the script and themes will still be crappy, except the dump is in a Taj Krishna instead of Cafe Bahar. Now lets get to some facts that a director buddy of mine laid it on me, when I was ranting about this crap products from Telugu movies.
1. Firstly, this director said - Telugu People dig this crap, so they churn this crap out ( you cant beat that logic and fact )
2. Every producer wants to make money - put a few crores in and get it doubled quickly and cleanly; good returns on investment.
3. All kids and their parents want a break in movies, easy investment funds for wannabe directors, script writers and the whole lot. so its a win-win for the small guys.
4. So in the end we don't want crap, we have to stop going to these crappy shows
5. And hope that, we have some good people that will give us flicks like Alla Modalaindi etc - entertaining movies.
6. Once upon a time we could have blamed the Chai walas and Rikshaw wallas for supporting crappy actors like ( 60 Yr old NTR or 70 Yr old Rajanikant - they were fantastic in their prime, but they just never knew when to quit because of their fans). Now the fans are IT kids and college kids, we cant still believe in bullshit fandom and fanboy mentality. But thats a topic for some other time..!!
LEAVE A COMMENT
fullhyd.com has 700,000+ monthly visits. Tell Hyderabad what you feel about Mukunda!
MORE MOVIES
Latest Reviews
83
83 - Telugu
Shyam Singha Roy
The Matrix Resurrections - H...
The Matrix Resurrections
more
Pushpa: The Rise - Hindi
Pushpa: The Rise
Spider-Man: No Way Home
Spider-Man: No Way Home - Hi...
Spider-Man: No Way Home - Te...
Chandigarh Kare Aashiqui
Akhanda
Satyameva Jayate 2
Ghostbusters: Afterlife
Eternals (Telugu)
Contemporary Reviews
Chinnadana Nee Kosam
Night At The Museum: Secret ...
Night At The Museum: Secret ...
Ugly
Raghuvaran B.Tech
more
Mana Kurralle
A Shyam Gopal Varma Film
Chandrakala
PK (Peekay)
Lingaa (Tamil)
The Hobbit: The Battle Of Th...
Badlapur Boys
Lingaa
Exodus: Gods And Kings (Hind...
Random Reviews
A Knights Tale
Chinna
XXX (Telugu)
Doosth
Aashiq Banaya Aapne
more
Bichhoo
Vivah
Blade Babji
Toy Story 1 & 2 (3D)
The Hole - 3D
Poola Rangadu
Swamy Ra Ra
Savitri
Chef
Jersey
SEARCH MOVIES
Dissatisfied with the results? Report a problem or error, or add a listing.
ADVERTISEMENT
SHOUTBOX!
{{todo.name}}
{{todo.date}}
[
ip{{todo.ip}}
]
{{ todo.summary }}... expand »
{{ todo.text }} « collapse
First  |  Prev  |   1   2  3  {{current_page-1}}  {{current_page}}  {{current_page+1}}  {{last_page-2}}  {{last_page-1}}  {{last_page}}   |  Next  |  Last
{{todos[0].name}}

ADVERTISEMENT
This page was tagged for
Mukunda telugu movie
Mukunda reviews
release date
Varun Tej, Pooja Hegde
theatres list
Follow @fullhyderabad
Follow fullhyd.com on
About Hyderabad
The Hyderabad Community
Improve fullhyd.com
More
Our Other Local Guides
Our other sites
© Copyright 1999-2009 LRR Technologies (Hyderabad), Pvt Ltd. All rights reserved. fullhyd, fullhyderabad, Welcome To The Neighbourhood are trademarks of LRR Technologies (Hyderabad) Pvt Ltd. The textual, graphic, audio and audiovisual material in this site is protected by copyright law. You may not copy, distribute, or use this material except as necessary for your personal, non-commercial use. Any trademarks are the properties of their respective owners. More on Hyderabad, India. Jobs in Hyderabad.