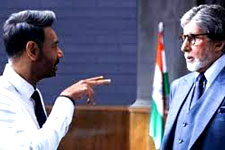 Punarvasu Pendse / fullhyd.com
EDITOR RATING
6.0
Performances
Script
Music/Soundtrack
Visuals
6.0
6.0
5.0
7.0
Suggestions
Can watch again
Yes
Good for kids
No
Good for dates
No
Wait for OTT
Yes
Forced intermissions, the dividing lines that separate the two halves of most movies that release in India, are bittersweet - on one hand they allow people to freshen up and get refreshments without missing any on-screen action, while on the other they often end up cutting up the flow. Runway 34 is the first movie reviewed by yours truly that has the intermission feel like a part of the movie as it splits the movie into two different genres.

Ajay Devgn is in the directorial chair for the third time after U Me Aur Hum and Shivaay. Just like in the latter movie, director Ajay Devgn puts actor Ajay Devgn on a pedestal - flawed and brazen, but ultimately "the man".

Captain Vikrant Khanna (Ajay Devgn) is an experienced commercial pilot who can't wait to head home after six consecutive days of flying. Vikrant's final flight before meeting his family and attending his daughter's birthday is a regular one from Dubai to Cochin. His co-pilot for the flight is the comparative newcomer First Officer Tanya Albuquerque, who has under 500 hours of flying under her wing compared to her senior's 16,000+ hours.

An approaching storm and the subsequent turbulence make landing in Cochin well-nigh impossible. With rapidly decreasing fuel reserves, Vikrant and Tanya are forced to make decisions that will decide not only the fate of the airplane passengers' lives, but also their own careers as pilots - all while being 35,000 feet above the ground.

Runway 34 is truly a tale of two halves. The first half is a tightly-directed thriller, where director Devgn pays attention to minute details to create a believable set-up, taking his time to show us how every single previous action led to the events of that fateful night. We also love that the trailer and the movie itself have red herrings for us to chase - we definitely did not expect that. And thus we find ourselves drawn into the narrative, wondering whether to love or hate the cocky arrogance of the man who always skirts the line of the law, without ever crossing it completely (apart from smoking in front of "no smoking" signs, that is).

Alas, the second half takes a dramatic turn into, well, drama. A courtroom replaces the airplane as the focus of attention, as top airport ministry investigator Narayan Vedant (Amitabh Bachchan) suspects that there is more to the case than meets the eye. The tension in the first half all but vanishes, and the movie starts to falter. By the time Runway 34 drags itself to its climax, we have already guessed what the ending will be. For a movie that is inspired by the 2012 Denzel Washington starrer Flight, Runway 34 fails to capture the essence of the original - a flawed, human character who isn't as heroic as he appears, and that heroic actions aren't always ones that involve bravado.

Ajav Devgn, as we said before, is "the man". Simultaneously both a rogue and a man of principles, Devgn's Captain Vikrant Khanna is almost all swagger - apart from a few moments in the first half where we see genuine emotion in his eyes, which is also easily the best part of the movie. Despite the rather one-dimensional second half performance which is also more the fault of Devgn the director than Devgn the actor, make no mistake, this is all his film.

Rakul Preet Singh plays a very believable awestruck junior pilot, and her internal struggles between doing the right thing and protecting her senior seem very relatable. Amitabh Bachchan, quite astonishingly, is the one underperformer, with his inquisitor act feeling more vengeful or antagonistic than that of being a seeker of truth. Boman Irani and Angira Dhar are wasted, with unimpactful and clichéd dialogue.

The score by Amar Mohile is loud, but it serves the purpose. Aseem Bajaj's cinematography really makes you feel the tension, even though the close-ups of sweat dripping down the pilot's face are perhaps a little over the top. The visual effects are a little video game-y, but do not distract.

Runway 34 is magnificent starting out, even managing to balance tongue-in-cheek humour while being a thriller without losing the tension it creates. Seriously, the first half gives us a scene where a brash, loud-mouthed influencer who is LITERALLY wearing rose-tinted glasses tells a journalist who suspects that there's something wrong with the airplane's route, to zip it. This one would have been the perfect slightly pulpy thriller to watch on the weekend, had it not been bogged down by the second half. It just makes you sigh, wondering what could have been. 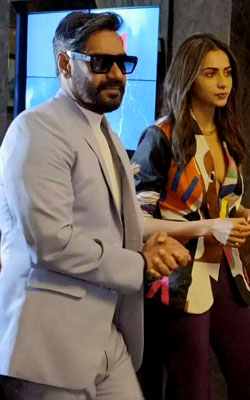 ADVERTISEMENT
This page was tagged for
Runway 34 hindi movie
Runway 34 reviews
release date
Ajay Devgn, Rakul Preet Singh
theatres list
Follow @fullhyderabad
Follow fullhyd.com on
About Hyderabad
The Hyderabad Community
Improve fullhyd.com
More
Our Other Local Guides
Our other sites
© Copyright 1999-2009 LRR Technologies (Hyderabad), Pvt Ltd. All rights reserved. fullhyd, fullhyderabad, Welcome To The Neighbourhood are trademarks of LRR Technologies (Hyderabad) Pvt Ltd. The textual, graphic, audio and audiovisual material in this site is protected by copyright law. You may not copy, distribute, or use this material except as necessary for your personal, non-commercial use. Any trademarks are the properties of their respective owners. More on Hyderabad, India. Jobs in Hyderabad.