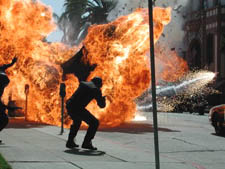 Hi! I'm your narrator, Maak! I look Indian, talk Indian and even go that extra mile in being Indian when I live even after death, but that's still the pseud way the rest of these guys pronounce my name. When you are making a Bollywood movie with a Hollywood crew (and, ssshhsh, a Hollywood tale as well), you gotta troll the lure - hit the middle ground, as it were. I'm dead, like I said, but thank goodness my contract calls me to do the narration anyway. So that's me, your narrator. Maak. Maak. Got a nice ring to it. Maak.

Now you could say that they could've got a narrator who's closer to being alive than me, but acute thinking audiences would make Kaante a flop movie. Besides, I get the least screen time, so I might at least get to mouth all the profundities. Y'know, stuff like, "That would prove to be the greatest mistake in the end." Adds gravity to the situation. Just don't sit at the end of the flick trying to put two and two together. In the long run, like Keynes said, we are all dead. There, one more of my profundities. 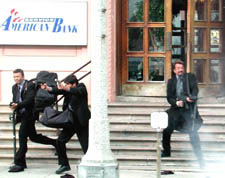 So why am I doing so much talking without getting to the point? Who's going to fill up space, schmuck? We gotta fill a 150-minute film here with precisely 30 minutes of substance, and you're already cribbing?

We based Kaante loosely - depending on your definition of loosely - on the 1992 Hollywood flick Reservoir Dogs. Now Reservoir Dogs was one of the decade's most influential motion pictures, and we did everything to replicate that - we put an ultra-hip soundtrack, we put in funky slamdunk dialogue, we put in super-slick visual effects, and we even thoughtfully put in the same plot even if it will rise far above the appreciation of our target audience. Someone thought we were making a flick for The New York Times' film critic. 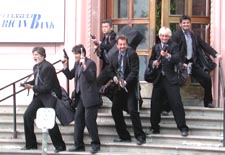 We were 6 gutsy dudes - Major, Ajju, Mark, Andi, Bali and me - who got our asses hauled into the slammer for no fault of ours - almost. Only one of us stole a truck. In there, we decide we'll make the cops pay for this transgression by robbing a bank. So it's already 75 minutes into the flick, but cut us some slack - we are trying to build characters. We surely build yours, as you sit there waiting for something to happen.

The robbery happens perfectly, except that we get caught right in the act. Luck sees all of us escape some 2,356,452 police bullets at point-blank range, and we congregate at a deserted warehouse. And instead of splitting with the loot, we decide to hang around to find out which of us was the police informer so we can put a bullet in his brain. It's a question of principles, you know. We even manage to fill the whole second half of the film doing this. And we all get killed in the end, by ourselves. 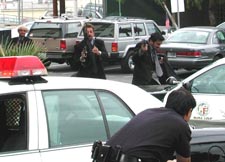 Carping critics might say that there's no logic to a lot of things in the film - like how we escape the cops, the stupid way Shetty and Dutt make up, how Dutt manages to capture a policeman, why this captive has to say that one of us is a cop when he knows that that will put his own colleague's life in jeopardy, and a hundred other things. So far as answering them goes, I might as well emigrate to Saturn.

ADVERTISEMENT
This page was tagged for
Kaante hindi movie
Kaante reviews
release date
Amitabh Bachchan, Sanjay Dutt
theatres list
Follow @fullhyderabad
Follow fullhyd.com on
About Hyderabad
The Hyderabad Community
Improve fullhyd.com
More
Our Other Local Guides
Our other sites
© Copyright 1999-2009 LRR Technologies (Hyderabad), Pvt Ltd. All rights reserved. fullhyd, fullhyderabad, Welcome To The Neighbourhood are trademarks of LRR Technologies (Hyderabad) Pvt Ltd. The textual, graphic, audio and audiovisual material in this site is protected by copyright law. You may not copy, distribute, or use this material except as necessary for your personal, non-commercial use. Any trademarks are the properties of their respective owners. More on Hyderabad, India. Jobs in Hyderabad.