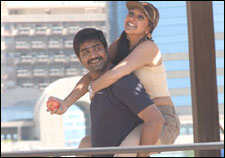 EDITOR RATING
3.0
Performances
Script
Music/Soundtrack
Visuals
NA
NA
NA
NA
Suggestions
Can watch again
NA
Good for kids
NA
Good for dates
NA
Wait for OTT
NA
With some better performances, direction and camerawork, Adilakshmi might have been a better movie. It actually was a better movie - in the form of Deewangee, whose copy it is. One thing that we at fullhyd.com believe in is that you should never remake a better movie. And if you do, you should at least use the same cast, director, dialogues and songs, so that nobody will know it's a remake. Adilakshmi's only saving grace is Srikanth, who probably knows it by now.

So there is a successful actress Surekha (Sridevi), whose latest film's director is brutally murdered. The accused is Adi (Srikanth), who is a childhood friend of Surekha, and struggling to be a script-writer. Surekha believes Adi is too naïve and docile to be a murderer. You agree with that, at least until "too". So she hires the city's best lawyer, Lakshmi Prasad (Naveen), who's never lost a case, to defend Adi.

Prasad is convinced that Adi is innocent, and in the course of his investigations, discovers something surprising and totally unexpected - that being a movie hero requires acting skills. However, it's too late - he can't learn now, and you have to live with him on screen for about 150 minutes. Prasad also finds out that Adi has a split personality - one that commits murders and another that forgets about them. He successfully argues in court, and gets Adi released and admitted to a mental asylum.

The following part of the review can be a spoiler, since the plot is revealed. And if you stop reading because of that, you really need a life. Anyway, Adi tells Prasad after he is released that he does not really have a split personality, and that he committed the murder since he loves Surekha, and since that director tried to rape Surekha. And he warns Prasad, who is now in love with Surekha, that he will kill him too if he doesn't stay away from her.

Prasad is irate - getting a client with a split personality is a once-in-a-lifetime opportunity, since you can bill him twice. And now he's lost everything! He swears revenge, and just as Adi is about to be released from the asylum, cons him into acting crazy, making the doctors decide to extend his custody. Adi however sweet-talks his way out, and starts stalking Surekha. And a battle of wits starts between him and Prasad.

What you need for a film dealing with a simmering psychopath and a cerebral man taking him on, are great performers. Vadde Naveen is a complete miscast - watching him act in this one can make anyone behave like a psychopath, so you can't really blame Adi. Really, Naveen's been around long enough to learn some acting.

Srikanth is so good, he shouldn't have been in this film. He's perhaps never really got his due in Tollywood. Sridevi does what she needs to, without standing out for any wrong reasons. A comic track with Ali, Abhinayasri and Uttej is sad.

The first half also has some lousy camerawork - it's like these guys are all learning as they are making the film. It's hard to come to any independent judgement about music that will forever be credited with a movie like this, so let's stay away from that.

ADVERTISEMENT
This page was tagged for
Adilakshmi movie
adi telugu cinima vido
Adi Lakshmi telugu movie
Adi Lakshmi reviews
release date
Follow @fullhyderabad
Follow fullhyd.com on
About Hyderabad
The Hyderabad Community
Improve fullhyd.com
More
Our Other Local Guides
Our other sites
© Copyright 1999-2009 LRR Technologies (Hyderabad), Pvt Ltd. All rights reserved. fullhyd, fullhyderabad, Welcome To The Neighbourhood are trademarks of LRR Technologies (Hyderabad) Pvt Ltd. The textual, graphic, audio and audiovisual material in this site is protected by copyright law. You may not copy, distribute, or use this material except as necessary for your personal, non-commercial use. Any trademarks are the properties of their respective owners. More on Hyderabad, India. Jobs in Hyderabad.