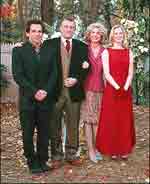 Feroz Hassan / fullhyd.com
EDITOR RATING
7.0
Performances
Script
Music/Soundtrack
Visuals
NA
NA
NA
NA
Suggestions
Can watch again
NA
Good for kids
NA
Good for dates
NA
Wait to rent it
NA
Whoosh! Did someone say getting married was a decision that one can take for oneself? Must be true for some and they may be better off for it. What a pity, then, that of all people, a guy with a name like Gaylord Focker thinks that he has to please his girlfriend's parents to push the ring up her finger. Not only that, he's one of that rare breed of professionals - male nurses. Sounds like just the plot for the Farrelly brothers, right? Could've been, but someone beat them to the mark. The Austin Powers' director, Jay Roach (quite a name in itself), seems to be quite a nasty fellow himself.

Greg Focker (Ben Stiller) - the first is an improvement on the original - is just the character to be played by Ben Stiller. His girlfriend Pam's (Teri Polo) father, Jack Burns (De Niro), is just the kind of guy he's better off without pleasing. Not even an assurance from Pam that 'all humor will be lost on them (the parents)' does make him any wiser. The result is a desperate attempt to avoid smoking, shagging and speaking the truth. The fallout of that is the desecration of Jack's mother's remains, a failed polygraph test (Jack is an ex-CIA agent), a garden flooded with shit, a burnt altar and a red-faced Pam!

All this may sound commonplace but for the inspired, and at the same time ridiculous, pairing of De Niro and Stiller. Could there be two more different actors facing off in the same movie? Stiller is the hesitant, desperate guy and the butt of all not-so-decent jokes: he's made such characters all his own since ... Mary. Wonder how he looks without that dumb look on his face! Maybe, he won't have a face without it. I just fear the day he's given the role of a serious lecturer or scientist.

What about De Niro then? The shocking intensity of his performance in Raging Bull, all those years ago, is still fresh in our minds, and here he pulls off a farce with the same malice as Jack la Motta (the character in Raging Bull) would've shown. His talent makes the character look simply eccentric instead of caricaturish, which it may have done in someone else' hands.

Teri Polo and Blythe Danner (she plays her mom) are on the sidelines, but look fine. Owen Wilson is utterly wasted in the role of Pam's ex-flame. We all know what he can do from his performance in Shanghai Noon, but in the absence of anything substantial, his ineffectual looks make his presence irritating.

Except for the rather dry part in the middle, the movie is just the kind of thing to loosen you up on the weekends.
Share. Save. Connect.
Tweet
MEET THE PARENTS SNAPSHOT

ADVERTISEMENT
This page was tagged for
Meet The Parents english movie
Meet The Parents reviews
release date
Robert de Niro, Ben Stiller
theatres list
Follow @fullhyderabad
Follow fullhyd.com on
About Hyderabad
The Hyderabad Community
Improve fullhyd.com
More
Our Other Local Guides
Our other sites
© Copyright 1999-2009 LRR Technologies (Hyderabad), Pvt Ltd. All rights reserved. fullhyd, fullhyderabad, Welcome To The Neighbourhood are trademarks of LRR Technologies (Hyderabad) Pvt Ltd. The textual, graphic, audio and audiovisual material in this site is protected by copyright law. You may not copy, distribute, or use this material except as necessary for your personal, non-commercial use. Any trademarks are the properties of their respective owners. More on Hyderabad, India. Jobs in Hyderabad.