Bhopal: A Prayer For Rain Review 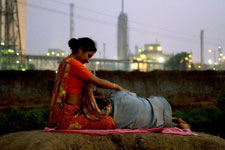 Nupur Barua / fullhyd.com
EDITOR RATING
5.0
Performances
Script
Music/Soundtrack
Visuals
7.0
4.0
5.0
6.0
Suggestions
Can watch again
No
Good for kids
No
Good for dates
No
Wait to rent it
Yes
The Bhopal Gas Tragedy was a black day in Indian history. It caused the deaths of many, and made Warren Anderson, the then CEO of Union Carbide, the plant that leaked the gas, one of the most hated men in industrial and human rights circles. It has been 30 years, and a movie to commemorate the disaster seems appropriate, especially since Anderson died earlier this year, in September.

Unfortunately, since the movie does not really delve into details such as dates, you must read up on the incident (preferably on Wikipedia) before you buy your ticket if you want to understand what exactly took place on the night of December 2-3, 1984, at the Union Carbide Plant in Bhopal. Believe us, you will thank us later.

The story begins with Warren Anderson (Martin Sheen) telling his Public Relations man, Shane (David Brooks), that he is not sure what he should do about the event that has just taken place in India. Shane advises him to cut off ties from the Indian branch. Just a few months ago, Anderson was in Bhopal, surveying the place and considering the possibilities of launching a similar plant somewhere else in the Far East. So, what went wrong?

The film cuts back to that time. In Bhopal, an already overcrowded city, the slum dwellers live in squalid conditions. One of the residents, Dilip (Rajpal Yadav), is a rickshaw-puller, but his luck has been running out. His wife Leela (Tannishtha Chatterjee), when not complaining about their poverty, spends her time looking for a suitable match for her sister-in-law, who lives with them.

The family's luck turns when one of Dilip's neighbours dies in an accident at the plant. Dilip, who loiters around the place as a part-time sweeper, is given the dead man's uniform, and suddenly, the family becomes relatively affluent. When Anderson visits, he singles out Dilip to chat with, even though they both do not understand the other's language. Which is fortunate for the supervisor of the company, since Dilip is in no way qualified to work there.

Motwani (Kal Penn) is a local journalist, who thinks there is something not quite right with the way Union Carbide operates. He looks for a story everywhere, and even enlists the help of a foreign journalist (Mischa Barton), who happens to be in Bhopal for another unrelated story. She manages to get a few quotes from Anderson, but her editor tells her that this particular piece is of no importance.

The safety supervisor, Roy (Joy Sengupta), is tired of pointing out to the plant managers that a leakage is imminent unless measures are taken. Not wanting to stop production even for a day, the bosses decide to let things carry on as they were, instead of halting for maintenance and repairs. By the time they do realise the dangers, it is too late. And on the night that Roy resigns, and the same night that Dilip finally gets his sister married off, the gas leaks during a cleaning session, and spreads over the slums, killing many, and making others chronically ill for the rest of their lives.

The story is told in a semi-docu-drama style, with Motwani being the narrator. His voiceover appears only in the beginning and towards the end, but maybe he should have said a few words in between, too. You see, if you are not familiar with the history, then there is a lot that may go over your head. Especially things like MIC (methyl isocynate) and how exactly Union Carbide executives let things carry on despite several warnings.

The story of the foreign journalist is unrelated, and abruptly ended. And that is just one. What happens to Roy? What about the auditor? What did the Chief Minister have to say? And how did the hospital deal with the situation? There are many incomplete plots in the film that leave you feeling dissatisfied. The last sequence, which is supposed to wrap up the movie by giving you an idea of what the present situation is with these victims and their families, is very abstract.

One of the flaws in this important story is the way the characters have been presented. None of them is consistent. Anderson, for example, is shown in the beginning to be a man with a conscience. We are made to invest in him emotionally, and then he suddenly becomes detached. Dilip insists on being a loyal employee even when he begins to understand that unethical practices are probably the norm in the plant. Then he panics. Motwani runs after stories, but his reporting is often made fun of, and then you are told later that he was lauded for his coverage of the story. Shane is scornful of the way things run in India, but he shows integrity when he has to stand up to the auditor. All rather confusing.

This confusion may have something to do with the fact that some of the characters are fictitious. Somehow, the real and the reel do not connect. Dilip, the main fictional hero (somewhat), is the most well-developed of the lot. The real characters are more intangible.

The actors cannot be faulted for their poorly-written characters. Each one of them is sincere and talented, even the ones that have smaller roles. Kal Penn loses his American accent and does a commendable job with his Indian English, although he is not as successful when he has to speak in Hindi. Martin Sheen comes across as a nice guy, as he usually does, and it is difficult to hate him as Anderson, given that Sheen makes him so human.

Rajpal Yadav and Tannishtha Chatterjee are subtle and effective. They are a delight to watch, especially together. Joy Sengupta looks slightly confused. Manoj Joshi is wasted, but he is very good in his role as the harrowed doctor. Lalit Tiwari deserved a lengthier role.

The film is set in 1984, and the production design very carefully avoids references to a more modern India, and is convincing. As are the costumes. However, since you know that the tragedy occurred in December, and that Bhopal has a harsh winter, you'd be surprised to see the characters in summer clothes. The background music is plain and evokes a sense of helplessness. The editing is choppy, and the camera work is average.

Bhopal: A Prayer For Rain begins with text by Subroto Roy Sahara, in which he speaks of justice delayed being justice denied. Ironic that the man is currently in prison for delaying justice himself. The movie, though well-intentioned, is not complete, and can be understood only if you read up on the disaster, or watch another film that deals with the same subject - Bhopal Express (1999).
Share. Save. Connect.
Tweet
BHOPAL: A PRAYER FOR... SNAPSHOT
BHOPAL: A PRAYER FOR RAIN SNAPSHOT 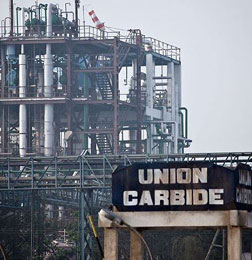 ADVERTISEMENT
This page was tagged for
Bhopal: A Prayer For Rain hindi movie
Bhopal: A Prayer For Rain reviews
release date
Martin Sheen, Mischa Barton
theatres list
Follow @fullhyderabad
Follow fullhyd.com on
About Hyderabad
The Hyderabad Community
Improve fullhyd.com
More
Our Other Local Guides
Our other sites
© Copyright 1999-2009 LRR Technologies (Hyderabad), Pvt Ltd. All rights reserved. fullhyd, fullhyderabad, Welcome To The Neighbourhood are trademarks of LRR Technologies (Hyderabad) Pvt Ltd. The textual, graphic, audio and audiovisual material in this site is protected by copyright law. You may not copy, distribute, or use this material except as necessary for your personal, non-commercial use. Any trademarks are the properties of their respective owners. More on Hyderabad, India. Jobs in Hyderabad.