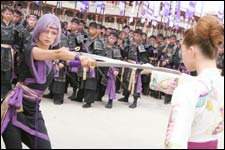 Samrat Sharma / fullhyd.com
EDITOR RATING
5.0
Performances
Script
Music/Soundtrack
Visuals
NA
NA
NA
NA
Suggestions
Can watch again
NA
Good for kids
NA
Good for dates
NA
Wait to rent it
NA
DOA: Dead Or Alive is based on the hit video game franchise of the same name, the latest iteration of which is available for the much hyped X-Box 360. It's a standard fighting tournament game, where players fight other opponents or the computer using various martial art moves and combos. With a game that has no storytelling devices, how do you create a full-fledged film out of it? Yeah well, remember the Street Fighter or Mortal Kombat films?

Director Cory Yuen takes the easiest route and directs a by-the-numbers action flick in which various people arrive on an island to take part in a martial arts tournament, and our protagonists must emerge victorious. Princess Kasumi (Devon Aoki) is a royal member of a Ninja clan in Japan. No one has heard from her brother Hayate (Collin Chou) since he went to take part in a tournament called DOA: Dead Or Alive.

When she is invited to that tournament herself, she accepts in order to find out more about her brother. She is joined there by Pro-Wrestler Tina (Jaime Pressley) and an assassin Christie (Holly Valance). The three girls must unite to prevail over the various traps and fights the island has in store for them.

As adaptations of video games go, this is a pretty much literal game-to-film translation. The girls arrive, fight baddies, beat baddies, team up and fight the computer system in the island, and there you go. Throw in a megalomaniac tournament director (Eric Roberts), and you can predict the plot in less time than it takes the babes to throw off their clothes.

Indeed, you get the feeling that one of the reasons the girls bond on the island is their common clothing allergies. But, in an adaptation of a male fantasy video game franchise, who is complaining? Yuen has a frantic style, with a very expository action flair. He indulges in frantic action presented using jump cuts, slow motions, freeze-frames and split screens – basically everything he can do to make sure you don't miss anything. For fans of the franchise, or any male member of the audience, really, there is bikini beach volleyball too.

The imagination of the writers is limited, however, to the source material, and all exposition and character development is eschewed for video game moments all through the film. Characters fight, they prepare to fight, repeat. There's no room for anything else. This makes for a plot that propels lesser and lesser interesting characters towards one another amidst decently choreographed action set pieces. There is an overabundance of CGI and wire-fu in the fights, and it never makes any bones about trying to be even remotely plausible.

The three lead women have some degree of screen presence and charisma, and that keeps from making you totally apathetic to the characters. Jaime Pressley shows a flair for comic timing, and Holly Valance is great in a role that has nothing in it for her – a zero character really. Even in the ridiculous stunts, the attitude the girls wield makes the action enjoyable, if not plausible.

While virtually every scene has extensively silly premises and even campier wire-fu, Yuen directs this film with a gleeful abandon that he displayed in The Transporter. The main players, too, understand the basic cheesiness of the proceedings and don't take everything except the action too seriously.

Obviously, it is preposterous to call this film good, or even intelligent. But who am I kidding? The audience of this film does not consist of people after meaningful cinema, does it? The target customer of a goofy popcorn action flick with loads of skin is pretty much going to be happy with this film, and yes, this is a genuinely awful film. But for what it's worth, it's also atrocious, dizzy fun.
Share. Save. Connect.
Tweet
KARO YA MARO (DOA:... SNAPSHOT
KARO YA MARO (DOA: DEAD OR ALIVE) SNAPSHOT

ADVERTISEMENT
This page was tagged for
KARO YA MARO(DO OR DIE) full movie download in Hindi
karo ya maro full hindi movie
DOA kro ya maro movie downnload
karo ya maro hollywood hindi movie download
karo ya maro full movie hindi mai hollywood
Follow @fullhyderabad
Follow fullhyd.com on
About Hyderabad
The Hyderabad Community
Improve fullhyd.com
More
Our Other Local Guides
Our other sites
© Copyright 1999-2009 LRR Technologies (Hyderabad), Pvt Ltd. All rights reserved. fullhyd, fullhyderabad, Welcome To The Neighbourhood are trademarks of LRR Technologies (Hyderabad) Pvt Ltd. The textual, graphic, audio and audiovisual material in this site is protected by copyright law. You may not copy, distribute, or use this material except as necessary for your personal, non-commercial use. Any trademarks are the properties of their respective owners. More on Hyderabad, India. Jobs in Hyderabad.