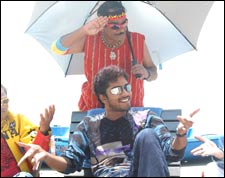 Ravi Mundoli / fullhyd.com
EDITOR RATING
5.0
Performances
Script
Music/Soundtrack
Visuals
NA
NA
NA
NA
Suggestions
Can watch again
NA
Good for kids
NA
Good for dates
NA
Wait for OTT
NA
If the first-day-first-show viewers’ reaction to Attili Sattibabu LKG (ASLKG) is anything to go by, then it would appear that the public will be voting on this one with their feet. About 5 minutes before the end, something happens which motivates 49.8% of the audience to collectively emit an agonized groan and stampede out of the hall. Another 49.8% couldn’t care less, probably because they were in a coma induced by a potent mixture of boredom and melodrama. The remaining 0.4% was in his seat, and awake, but mostly because he’d taken care to nail his hands to the furniture during the interval. After all, he had a review to write.

So here goes nothing. Attili Sattibabu (Naresh), after successfully completing his LKG, decides that he doesn’t want to end up a do-gooder or a wastrel, and puts his heart and soul into making money. On the one hand, he gives out small loans at outrageous rates of interest, and on the other, he runs a tent business (shamianas, lighting, music, food etc. for functions).

Sattibabu is obsessed with making more and more money, and looks at every relationship with an eye to its financial implications. He doesn’t notice that comely Ammulu (Vidisha), his cook’s daughter, is absolutely smitten by him. Ammulu performs even the ultimate sacrifice (i. e. makes him upma) whenever he comes home to collect interest on the money he’s lent her father.

Since Sattibabu doesn’t have any virtues apart from owning an Enfield Bullet, we can only conjecture that Ammulu has the IQ of an extinct flightless bird, to fall for him. Either that or we need to revisit our assumptions on the effects of powerful motorbikes on eligible damsels.

When Sattibabu finds that his elder brothers are on the verge of selling their ancestral home to the unscrupulous brother-in-law, he becomes desperate to stop the sale and acquire the house for himself. He tries to entice Pranathi (Kausha) who mysteriously runs a beauty parlour next to his office, into marrying him so that he can use her wealth to buy the house.

Apart from Naresh and the heroines, the rest of the cast is a veritable who’s who of Tollywood comedians. Imagine having Sunil, Krishna Bhagawan, Brahmanandam, Venu Madhav, Ali and Dharmavarapu Subramaniam at your disposal. Imagine if you could give each one of them a different original idiosyncrasy to make their own. The possibilities are endless. The mind boggles. And maybe it boggled a bit too much for the dialogue writer, because all that talent is sadly underutilized.

Even though the comedy works in places, there are too many yawning (in more than one way) gaps between the laughs, thanks to the length of ASLKG. What could’ve been a laugh riot careening from one scene to the next ends up having to rely yet again on innuendo for inducing chuckles.

It is hard to take notice of the music when the rest of the movie is dragging along, and the only number that makes an impression does so because it involves a bunch of Tollywood comedians in floral shirts, dancing to a Tollywoodized version of Sean Paul’s “Shake That Thing”, somewhere in Cambodia. Talk about surreal.

A movie primarily for the B and C centers, this one will do pretty little for the urban crowds. With the mercury pushing the 40s, you need a better reason than ASLKG to crawl out of the coolness of home.
Share. Save. Connect.
Tweet
ATTILI SATTIBABU LKG SNAPSHOT

ADVERTISEMENT
This page was tagged for
Attili Sattibabu LKG telugu movie
Attili Sattibabu LKG reviews
release date
Naresh, Vidisha
theatres list
Follow @fullhyderabad
Follow fullhyd.com on
About Hyderabad
The Hyderabad Community
Improve fullhyd.com
More
Our Other Local Guides
Our other sites
© Copyright 1999-2009 LRR Technologies (Hyderabad), Pvt Ltd. All rights reserved. fullhyd, fullhyderabad, Welcome To The Neighbourhood are trademarks of LRR Technologies (Hyderabad) Pvt Ltd. The textual, graphic, audio and audiovisual material in this site is protected by copyright law. You may not copy, distribute, or use this material except as necessary for your personal, non-commercial use. Any trademarks are the properties of their respective owners. More on Hyderabad, India. Jobs in Hyderabad.