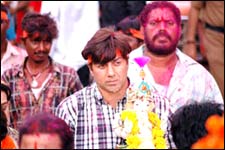 Samrat Sharma / fullhyd.com
EDITOR RATING
1.0
Performances
Script
Music/Soundtrack
Visuals
NA
NA
NA
NA
Suggestions
Can watch again
NA
Good for kids
NA
Good for dates
NA
Wait for OTT
NA
Oh, Sunny, Sunny, Sunny. What are we to do with him? There was a time when his name on a film's credits meant the constant ring-a-ding-ding of cash registers. When even the worst Sunny Deol film meant all-out action fare with some mindless entertainment. Now, it's all mindless and no entertainment. Dude, you gotta fire Guddu Dhanoa, really.

Big Brother is a tired, tired film with all the trappings of a late-'90s Sunny Deol action flick, but without any originality or coherence to hinge on. Nothing, absolutely nothing makes sense in the first half for about an hour. There are 'comedy' tracks that lead nowhere. There are shopping scenes that have no point, songs that come out of the blue, and then there's Farida Jalal as the godmother of vengeance.

I can't begin to count out all the things in the film that are so bizarre, you'd be shaking your heads in disbelief. And this is just the first half we're talking about. The second half is plain old vengeance and shouting and muscled jingoism. "Oyeeeeeeeee!", goes Sunny Paaji, and the baddies must tremble. Tremble they do, too, so much so that rapists jump off a high-rise just cause they're afraid he'd throw them!!!

There's a bad guy beat-down an hour into the film, and it is so gleefully shot with over-the-top abandon, I was actually encouraged. I imagined what follows must be some kind of a deliberately ridiculous film like Kung-Fu Hustle and immense dollops of outrageous fun. That scene set me up for some terrible disappointments, though. The film is entirely dour and devoid of fun.

What made any of the Sunny films work in the '90s was a sense of fun - a feeling of guilty pleasure filmmaking that expected the audience to have as good a time as the makers had making the damn film. None of that is visible in the tired eyes of Sunny Deol, or the more-than-usual exhausted stylings of Guddu Dhanoa.

The film moves on a pace entirely too sluggish for a film of this genre, and I swear, it looks like it has been cut and pasted together with duct tape. This is a movie entirely out of sync with the time or audience it is made for, and frankly, it rankles.

It's not just that the film is a string of bizarre happenings strung together with high-octane bravado amounting to nothing. It's the fact that it expects us to take all of this seriously, that hurts. We all know what a Sunny actioner is and should be like. This one has the presumptuousness of trying to fool us that it has a message, that it presents reality and how it should be understood. Hogwash.

This is a laughable attempt at anything remotely message-mongering, and the bizarre so outweighs the social, that you rarely pay attention to all the hugely politically incorrect things that happen in the film. You just tire of the whole conceit, and the fact that Dhanoa has nothing new up his sleeve to show you. There is absolutely nothing here that should appear to you as remotely novel, or entertaining for that matter.

The villains all spew suitably evil dialog, the good guys talk about protecting the innocent in standard screenplay mode, and just about everyone talks as if the film has been written on a template of some sort. The action is inventive for about 3 minutes, after which it becomes tiresome, not to mention there isn't much of it to go around anyway. There are like, 3 set-pieces that Dhanoa invests in, tops.

Oh, yeah, there's a story, too. After local do-gooder goon (Devdhar Gandhi) and pseudo politico mom (Farida Jalal) in Delhi have to tend to a family tragedy (a politician's son throws acid on the daughter), they start executing acid-throwers and rapists and molesters in New Delhi with abandon. They shift to Mumbai after it all turns nasty for them, but a Commissioner with a vengeance (Danny Denzongpa) moves to Mumbai as well to hunt them.

There are some random politicians and leerygoondas thrown in too, in a story that makes no sense with the flash-forward-and-back Dhanoa implies, and less so when I recount them chronologically. Let's just say that the film is not worth your time, shall we? Yes, please.
Share. Save. Connect.
Tweet
BIG BROTHER SNAPSHOT

ADVERTISEMENT
This page was tagged for
big brother sunny deol download
Download hindi movie big brother
Big brothar hindi movie dawnlod
Big brother move Sunny deol downlod
big brother movie download sunny deol
Follow @fullhyderabad
Follow fullhyd.com on
About Hyderabad
The Hyderabad Community
Improve fullhyd.com
More
Our Other Local Guides
Our other sites
© Copyright 1999-2009 LRR Technologies (Hyderabad), Pvt Ltd. All rights reserved. fullhyd, fullhyderabad, Welcome To The Neighbourhood are trademarks of LRR Technologies (Hyderabad) Pvt Ltd. The textual, graphic, audio and audiovisual material in this site is protected by copyright law. You may not copy, distribute, or use this material except as necessary for your personal, non-commercial use. Any trademarks are the properties of their respective owners. More on Hyderabad, India. Jobs in Hyderabad.