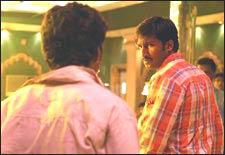 Ravi Mundoli / fullhyd.com
EDITOR RATING
6.0
Performances
Script
Music/Soundtrack
Visuals
NA
NA
NA
NA
Suggestions
Can watch again
NA
Good for kids
NA
Good for dates
NA
Wait to rent it
NA
Five minutes into Okkadunnadu, the villain makes his mark (literally) by trying to pull off a henchman's ear. Literally tear it off, in the manner in which one tears off a leg from the rest of the chicken in your biryani. This somewhat funny yet ominous scene should give you an inkling of how the rest of the movie will shape up.

Chandrasekhar Yeleti seems to be out to prove a point, namely that he too is capable of making a standard masala movie. The question that pops to mind is, "Why?" That being said, Okkadunnadu works pretty well as a run-of-the-mill flick. Thanks to Yeleti, the basic narrative is taut and engrossing, especially during the first half, but tends to sag a bit during the second.

Sona (Mahesh Manjrekar) is the kingpin of the Mumbai's underworld gold smuggling business. Along with his langotiya yaar Jayadev (Nasir), he presides over an empire of crime.

However, it looks like Sona's presiding days are numbered, because he suffers from a terminal heart disease. This forces him to roll around a suitcase type thing on wheels, which monitors his heart and peps it up when needed. It has a display which closely resembles the command console of the starship Enterprise, and is attached to the heart via several dangerously delicate looking plastic tubes. When you realize that this contraption means that he can never take carry-on baggage on flights, you start feeling really sorry for the poor old chap (until the ear pulling starts).

The only way Sona can save his life is to undergo an urgent heart transplant. An additional complication is that Sona's blood group is the very rare "Bombay blood group", and the donor must be of the same blood group. All his attempts to find a suitable "donor" (i. e. someone whose heart he can "borrow") fail, and he is at the end of his tether. Is there no one who fits the bill?

Okkadunnadu. Kiran (Gopichand) arrives in Mumbai to collect payment for some property that his family sold to a local seth, through Gowtami (Neha Julka), a realtor. Gowtami lives with her parents in an improbably located house on the beach, and manages the family business. Kiran pursues Gowtami doggedly for the money he is owed, hinting that ever so slightly he is under great pressure to collect the cash, and that he will almost certainly do unspeakably violent things after the interval. We later find out that he needs the money to help his father Gowrishankar (Suman) get out of financial difficulties.

Good Samaritan that he is, Kiran donates blood to someone in need of the "Bombay blood group", and this information travels all the way to Sona, giving him a reason for living (literally). His buddy Jayadev goes to work, trying to entice Kiran to come into the hospital for "tests" (read "involuntary transplant"), but all is not well in the state of Sona's empire, and Sona's disgruntled nephew tips Kiran off about Jayadev's real intentions. Kiran escapes from the hospital, and to find out what happens next, you'll have to watch Okkadunnadu.

Plot and storyline are unmistakably Yeleti's strong suit. His second strength is his understated rather than the slapstick sense of humor. There's a trademark scene at the beginning of Okkadunnadu where both villains gaze fondly at a photo from their youthful days, only to say something like, "Remember when this photo was taken? It was the same day that we chopped off XYZ's legs and threw him in the canal. Ha ha ha. Those were the days… sigh."

Yeleti sticks to playing the right cards in the first half, which makes it gripping and successfully sucks you into the movie itself. Perhaps under pressure from the "formula", an item number, a comedy track, and a romance angle are squeezed in rather late, which mars the effort somewhat. Keeravani's music and songs are definitely catchy, and are likely to remain popular for a while.

Gopichand does a very commendable job as the mostly docile son trying to save his father's reputation. He has a perpetually worried look on his face, and you start to sincerely feel sympathy for his character, especially when Gowtami keeps giving him the runaround. You feel like putting an arm across his shoulder and telling him that it will all work out, except when he is bashing up the goons, using progressively bloodier and innovative tools and processes.

Neha Julka is also a refreshing revelation. For a change, the heroine has something more to do than croon and swoon, and since the romance between Kiran and Gowtami starts a bit late, you get to see what else Gowtami (and Neha) are capable of. Nasir will surely win the Oscar award this year in the "Ability to Make Eyebrows Move Independently Of Each Other" category. That aside, he is believable as the "managing director" villain (as opposed to Manjrekar's "chairman" villain) and may even touch a chord with his devotion to his friend.

All said and done, Okkadunnadu is a mixed bag of offerings. As discerning members of the audience, we can only tell Chandrasekhar Yeleti that he's made the point that he's quite capable of turning out an adequate commercial/mainstream movie, but can he please go back and do some more of what he does best - the high tension, low volume, tightly written action/thriller genre?
Share. Save. Connect.
Tweet
OKKADUNNADU SNAPSHOT

See Okkadunnadu full details
OKKADUNNADU USER REVIEWS
1 - 15 OF 15 COMMENTS
POSITIVE  |  NEGATIVE |  NEWEST  |  OLDEST  |  MOST HELPFUL  |  LEAST HELPFUL
USER RATING
8.4
107 USERS
Performances
Script
Music/Soundtrack
Visuals
NA
NA
NA
NA
Can watch again - NA
Good for kids - NA
Good for dates - NA
Wait to rent it - NA
Occasional Critic on 9th Apr 2007, 2:56pm | Permalink
Why O why, Mr. Yeleti, did you succumb to tollywood taskmasters.
RATING
4
Siva on 28th Mar 2007, 1:56pm | Permalink
Good movie to watch in the last 6- 8 months.Mainly the story is good....screenplay could be made more taut in the second part....but all in all a good movie to watch once.
RATING
8
Aisa Kya? on 21st Mar 2007, 2:54pm | Permalink
excellent film! 2.5 stars?????? dunno what's wrong with the reviewer!
its one of the best telugu films of recent times along with pokiri and bommarillu!
RATING
8
Movie Freak on 21st Mar 2007, 11:39am | Permalink
average movie; masaalaa movie??....guys don't expect 'masala'...wrong choice of heroine (her talent is better suited for sth else may be...)very little exposing given current standards... and fights we've seen all of these stunts in some way or the other :-(
RATING
6
Ultimate Reviewer on 8th Mar 2007, 8:57pm | Permalink
Movie's ultimate. It's an out and out roller coaster ride right from the word "go". It keeps you thoroughly involved and excited throughout. I saw this movie twice in 2 days. Never seen such a thriller before in tElugu cinema. We need guys like Yeleti now to boost up telugu cinema and take it to global range. spl mention> fights by Allen Amin( dhoom 2 fight master) and Ram Lakshman are sure to blow your minds away. Edge of the seat kind of stuff, they are. Must watch for all macho men, except feminine reviewers like the one in fullhyd.com
RATING
10
Surendra Nani on 8th Mar 2007, 11:40am | Permalink
exellent movie
RATING
10
Kiran on 8th Mar 2007, 3:56am | Permalink
v v good screenplay
v v good direction
this is a stupid review
what makes me laugh is that Rakhi movie had 3 stars and this one less than that?
i guess reviewer was expecting an art film from yeleti without any commercial stuff
bottomline, i recommend everyone to go and see this movie, not just this movie any yeleti's movie
It is definitely better than any other telugu movie made in the past one year

Okkadunadu is a damn good movie and deserves a 4 star rating , the nxt time you write a review u should write the following disclaimer " this review was made by a cynical man with the least regards for the opinion of others"

ADVERTISEMENT
This page was tagged for
okkadunnadu movie review
okkadunnadu movie
film review okadunnadu
Okkadunnad review
Okkadunnadu telugu movie
Follow @fullhyderabad
Follow fullhyd.com on
About Hyderabad
The Hyderabad Community
Improve fullhyd.com
More
Our Other Local Guides
Our other sites
© Copyright 1999-2009 LRR Technologies (Hyderabad), Pvt Ltd. All rights reserved. fullhyd, fullhyderabad, Welcome To The Neighbourhood are trademarks of LRR Technologies (Hyderabad) Pvt Ltd. The textual, graphic, audio and audiovisual material in this site is protected by copyright law. You may not copy, distribute, or use this material except as necessary for your personal, non-commercial use. Any trademarks are the properties of their respective owners. More on Hyderabad, India. Jobs in Hyderabad.