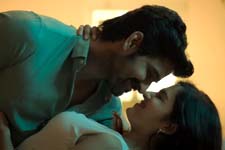 Sai Tulasi Neppali / fullhyd.com
EDITOR RATING
5.5
Performances
Script
Music/Soundtrack
Visuals
6.5
6.0
7.0
7.0
Suggestions
Can watch again
No
Good for kids
No
Good for dates
Yes
Wait for OTT
Yes
When Krishna first meets Vrinda, bells toll, and butterflies flit by. But Krishna (Naga Shaurya) is an orthodox brahmin, and Vrinda (Shirley Setia) is a progressive Delhi girl. Krishna's parents take turmeric baths and perform elaborate pujas. Vrinda's parents smoke and drink. To bring their polar opposite worlds together, Krishna tells a lie. This lie then takes a life of its own and threatens to rip them apart.

Krishna Vrinda Vihari hits all the clichéd beats of a romantic comedy - moonlit proposals, family objections and dramatic reconciliations. In this predictable template, only the characters' traits get a modern twist. A decade ago, the heroine may have been a sweet, innocent daddy's girl, and the hero, a macho demigod. Today, the leading lady is an urban progressive with an alcohol problem, and the main man is a reluctant feminist. Indeed, in many ways Vrinda reminds me of Sammathame's Saanvi whose image was similarly modernized with alcohol and cigarettes. And in other ways, the movie is reminiscent of Ante Sundaraniki, whose hero and heroine also had different cultural backgrounds.

However, despite it trying to be a modern rom-com, KVV's characters are superficial, and the script is tinged with misogyny. Vrinda's male colleagues (who look like off-duty bouncers) openly discuss her being "reserved" by their gang leader (Amitash Pradhan). And in case you didn't catch on to the reservation metaphor, Krishna's friend (played by Satya Akkala) literally walks around with a handkerchief to lay claim to women.

Then, Krishna's mother (Radhika) and grandmother (Annapurna) are caricatures of god-fearing brahmins. They are horrified when Vrinda goes to the office for a night shift, or casually hugs a male friend. These generational and cultural differences are exploited for comedic effect, but the jokes work only sporadically. Other times it's as if Krishna's family has been living under a rock.

If you step back from the office humour and family drama of KVV, you'll also see that the story has a hollow romantic core. There is no good reason for Krishna to fall in love with Vrinda, apart from the penis-led rationale that "she's beautiful/hot". Krishna however waxes lyrical about Vrinda's virtues to his mother - "She is a blessing for our family," he says - when all we've seen of her is how she bullies her employees and takes advantage of men.

The big conflict in the story is about impotence. And thanks to a comical doctor played by Vennela Kishore, this topic becomes a (cough, cough) fertile ground for inane euphemisms about sex. The script needlessly toys with our emotions — one minute it is erection jokes, and the next minute it is tears and confrontations. There are also too many budget-gobbling songs. And there is a gratuitous fight sequence where Naga Shaurya bares his chest to reveal his well-oiled washboard abs. It is as if he wants us to know that he may play a feminist, but he ain't no sissy.

Shaurya puts his best effort as Krishna, but even his best doesn't deliver the charm and X-factor his role requires. Shirley's raspy voice and her sweet-and-spicy looks are the highlights of an otherwise average performance. There's a constellation of comedians - Vennela Kishore, Satya, Rahul Ramakrishna, Brahmaji... - but it is the grandmotherly Annapurna who stands out with her snappy comebacks. Apart from her, Radhika gives the only other memorable performance, as a stern matriarch.

Aneesh Krishna's film is ultimately just a loose assemblage of jokes. Thanks to hammy one-liners like "you complete me" and "you make me feel safe", we are never drawn to the romance between the leads. The writing spins out of control so many times that the characters are perpetually either underreacting or overreacting to the situations.

Indeed, all the drama in KVV originates in lost translations and silly misunderstandings. Nothing that a good night's sleep and an honest conversation couldn't have fixed. So why this story deserved a 2-hour+ runtime is a real conundrum for me.
Share. Save. Connect.
Tweet
KRISHNA VRINDA VIHARI SNAPSHOT 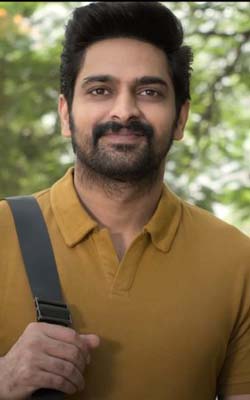 ADVERTISEMENT
This page was tagged for
Krishna Vrinda Vihari telugu movie
Krishna Vrinda Vihari reviews
release date
Naga Shaurya, Shirley Setia
theatres list
Follow @fullhyderabad
Follow fullhyd.com on
About Hyderabad
The Hyderabad Community
Improve fullhyd.com
More
Our Other Local Guides
Our other sites
© Copyright 1999-2009 LRR Technologies (Hyderabad), Pvt Ltd. All rights reserved. fullhyd, fullhyderabad, Welcome To The Neighbourhood are trademarks of LRR Technologies (Hyderabad) Pvt Ltd. The textual, graphic, audio and audiovisual material in this site is protected by copyright law. You may not copy, distribute, or use this material except as necessary for your personal, non-commercial use. Any trademarks are the properties of their respective owners. More on Hyderabad, India. Jobs in Hyderabad.