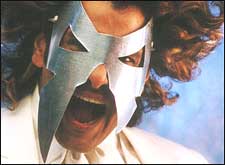 EDITOR RATING
6.0
Performances
Script
Music/Soundtrack
Visuals
NA
NA
NA
NA
Suggestions
Can watch again
NA
Good for kids
NA
Good for dates
NA
Wait for OTT
NA
Aparichitudu is the story of a man with a split personality who takes on corruption through his persona non grata counterpart. Shankar's latest opus is braided with big money (some Rs. 26 crores), but is marked by a plot that is terse on logic and frothing with the utopian fantasy of a childish romantic. Using a superhero to fight corruption is like, well, watching a movie. Outside the theater, there's a real world, and the superheroes take bribes. The ordinary man in Aparichitudu can change nothing, and that's what makes this an ordinary movie.

In many ways, Aparichitudu is a desperate version of Shankar's celebrated diatribe against venality, Bharateeyudu. Bharateeyudu had a man with special fighting skills that he painstakingly built and perfected over a lifetime. Aparichitudu has a man who exists in extended psychology syllabus. Which is what makes it desperate - when all fails, pray for a miracle that there's another side to you that comes railroading at mach 10 to get the baddies. Oh, but this is just a movie. Pardon me all over the place.

Ramu (Vikram) is a vermilion-clad, Luna-wielding orthodox Brahmin lawyer, helping dispossessed poor people fight for justice, and meeting with mixed success (okay, none). He thinks that every citizen should be like Gandhi, and unfortunately takes his thoughts very seriously. An indomitable whiner, he alienates Nandini (Sada), the woman he's soft about, with his incessant complaints to authorities over every transgression in civil life.

Ramu's distress and frustration are not all in vain, though. Extreme emotions result in his transformation from the mild-mannered forgiving Brahmin to a ruthless avenger, Aparichitudu. Superhumanly powerful and brutally intolerant of corruption, insensitivity and lethargy in people, Aparichitudu simply kills the persons that Ramu filed under the above heads. Then he flips into Ramu all over again, and so on.

The plot has too many holes to even bother with. The logic behind Aparichitudu's killing people for minor mistakes is off even the fringe - you don't kill people for cooking poor quality food or, worse, just being lazy. There are also issues of continuity, and there is no reason for Aparichitudu being as discordantly powerful or adept at combat as he is. While the film is about multiple personality disorder, the alter avatar is actually superhuman.

The plus points of the film are the visual opulence studding almost every frame, the music, the stunts and the performances. Vikram, fast waxing into Tamil's numero uno star, performs pretty eloquently in a quasi-dual role, especially towards the end. Sada is fairly expressive, too, in a character that has more wardrobe than meat in it. Prakash Raj assumes disguises for seemingly no reason - another instance of the callousness in scripting detail that marks this project. He's his normal talented self.

The music (Harris Jairaj) is good, especially the song Rainbow Remo. The settings for the songs range from artful to sleek, and are a general visual feast. The cinematography is expectedly outstanding. And the stunt sequences where Aparichitudu takes on an entire martial arts school would rate among the more well-choreographed and edited in Indian films.

The first half is interrupted by too much unnecessary characterization, and is relatively slow, compared to a more motivated second half. On the whole, this is a film that needs a suspension of logical reasoning, and might not be a great bet for everyone.
Share. Save. Connect.
Tweet
APARICHITHUDU SNAPSHOT

See Aparichithudu full details
APARICHITHUDU USER REVIEWS
1 - 15 OF 30 COMMENTS  |  NEXT  |  LAST
POSITIVE  |  NEGATIVE |  NEWEST  |  OLDEST  |  MOST HELPFUL  |  LEAST HELPFUL
USER RATING
7.6
391 USERS
Performances
Script
Music/Soundtrack
Visuals
10.0
9.0
6.0
8.0
Can watch again - Yes
Good for kids - Yes
Good for dates - Yes
Wait for OTT - No
singhprashast2011 on 11th Sep 2015, 12:10pm | Permalink
I have seen the Hindi version Aparichit and I would review it only. The film is so good that I would surely buy the DVD of the movie if I get a chance. The film is a clean entertainer with several messages for the society.

It's the first movie of Vikram that I have seen. He is just amazing! The fights,music, dialogues, story and screenplay are awesome. The way Aparichit punishes the wrong doers is simply marvellous! Aparichit(Anniyan) is like a superhero that has come to save us. The conversion of Tamil titles in Hindi throughout the entire movie needs to be appreciated. Shankar has really proved how a story can make superhero.

On the whole,Aparichit(Anniyan) is a complete family entertainer that will be appreciated by all. Go,watch it,for sure you will be entertained!


Pros: Entire movie; action, Visual effects, Vikram's performance, an eye opener for the society
Cons: Nothing at all!

RATING
10
Harish G on 30th Jun 2006, 5:35pm | Permalink
Aparichitudu should take on the lazy lady who wrote this review.

--y does this lady get attracted to remo n not aparichitudu?? Does she want only meat and not mind??

does any have a picture of aparichitdu with his hair down(first person view)if so please post the picture here, or the website were you got it.

ADVERTISEMENT
This page was tagged for
Aparichithudu telugu movie online
Aparichithudu telugu full movie download#ip=1
Aparichithudu telugu movie review
Aparichitrudu muvi full download
aparichitudu movie review in Telugu
Follow @fullhyderabad
Follow fullhyd.com on
About Hyderabad
The Hyderabad Community
Improve fullhyd.com
More
Our Other Local Guides
Our other sites
© Copyright 1999-2009 LRR Technologies (Hyderabad), Pvt Ltd. All rights reserved. fullhyd, fullhyderabad, Welcome To The Neighbourhood are trademarks of LRR Technologies (Hyderabad) Pvt Ltd. The textual, graphic, audio and audiovisual material in this site is protected by copyright law. You may not copy, distribute, or use this material except as necessary for your personal, non-commercial use. Any trademarks are the properties of their respective owners. More on Hyderabad, India. Jobs in Hyderabad.