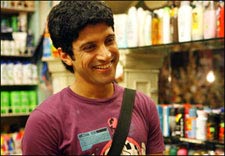 Deepa Garimella / fullhyd.com
EDITOR RATING
5.5
Performances
Script
Music/Soundtrack
Visuals
8.0
4.0
8.0
8.0
Suggestions
Can watch again
Yes
Good for kids
Yes
Good for dates
Yes
Wait for OTT
Yes
"I am not Zaffar Khan; Zaffar Khan is an icon, and I work for him."

This is said in half-jest, by Zaffar Khan, a superstar, played by Hrithik Roshan, who is definitely not the superstar that Zaffar Khan is meant to mock. The mocking undertones are, of course, in the eyes of the beholder on the look-out for a conspiracy. Thankfully, Luck By Chance compensates for this slight, sometime in the film.

The plain-looking Sona (Konkona Sen Sharma) is a junior artiste struggling for a break, and fuels her dreams by getting used by a casting director. Enter Vikram Jaisingh (Farhan Akhtar), a fiery, smart theatre actor who comes to Mumbai, from Delhi, to become a film hero. Though slightly naive at first, Vikram finds his way around pretty soon. Oh, of course, Sona and Vikram are girlfriend and boyfriend now.

Good news comes for Vikram when Zaffar Khan (Hrithik Roshan), a reigning star, wriggles out of a big-budget film that is launching a star-daughter, Nikki (Isha Sharvani), whose mother is played by the ever-so-graceful Dimple Kapadia. Romy Rolly (Rishi Kapoor), the film's producer, whose son (Sanjay Kapoor) is directing the film, is hurt by Zaffar's insensitivity, and Nikki's mum is concerned about her daughter's debut.

Vikram is cast as hero, he has an affair with the heroine, gossip scandalizes the hero-heroine pair even before the film releases, hearts are broken, and after some heavy brooding and success' lessons spelt out (in what is possibly the best dialogue of the film, delivered by an extremely special person - sure, the film saves the best for the last!), things calm down.

Luck By Chance has a story which is one long string of insider jokes and cliched situations - with sneers at corporate production houses, doting mothers of heroines, bloated star-egos, rejected roles, atrocious script-writing - everything that is supposedly fun to watch because we're terribly curious about how Bollywood works and because we don't believe the rumours.

Which brings us to another problem - that of an image misfit. Both the lead actors are star-kids themselves (highly talented though they are), neither of them seemimgly cares much for mainstream cinema, and surely, neither of them is 'struggling'. And Akhtar, for all the effort he puts in to look like a person who wants to make it big as a 'hero', appears to be scorning the very character he plays. Konkona, of course, puts in a great performance.

Rishi Kapoor and Dimple Kapadia have major roles, and both are wonderful, while an over-the-top Juhi Chawla, who plays the role of Rolly's wife, shockingly messes up every scene she's in. Isha Sharvani, with another key role in the film, is equally shocking - what on earth is with her make-up? She sure didn't look like she was from earth, and that's not a compliment. The rest of the main cast is faultless, however, and like we mentioned, the one-cameo-per-15-minutes policy spices up things very well.

Shankar-Ehsaan-Loy come up with a great soundtrack, but very few songs. The camera loves all the faces that come in front of it, and everyone looks like a million bucks - mainly Dimple and Farhan Akhtar.

See Luck By Chance full details
LUCK BY CHANCE USER REVIEWS
1 - 5 OF 5 COMMENTS
POSITIVE  |  NEGATIVE |  NEWEST  |  OLDEST  |  MOST HELPFUL  |  LEAST HELPFUL
USER RATING
8.0
2 USERS
Performances
Script
Music/Soundtrack
Visuals
8.0
8.5
8.0
7.5
Can watch again - Yes
Good for kids - No
Good for dates - No
Wait for OTT - No
Siva on 21st Feb 2009, 8:17pm | Permalink
Dear Editor, Thanks for posting your views. Its nice to see that you value each visitor of your website.
I am a little bit disappointed that you said "fullhyd.com's ratings are more indicative of expected box-office performance". You also noted "we make exceptions in certain cases". Honestly, the last couple of years that I have been following fullhyd, very rarely did I feel that you were not upto your standards ( e.g.: mr. medhavi, I remember your comment of pink-slipping the reviewer's ass :-) ). Otherwise, rarely have I seen that a good movie, irrespective of its box office prospects, going unnoticed by you. However, of late, one or two reviewers havent been able to keep up the standards of fullhyd. I dont mind if somebody overrates the movie, not much expect few people having a bad day at theatres. But when a good movie is underrated, like mr. medhavi or oye lucky lucky oye, most people will miss out the fun of watching it on big screen. However your claim of "we make exceptions in certain cases" sounds hollow because, just a glance tells me that you gave a good rating to many box office duds like black friday, eklavya, Dev D, u me aur hum, honeymoon travels pvt ltd, maqbool, being cyrus, maine gandhi ko nahin maara etc. This means that either your claim of catering to box office is not true or may be exception for you is more like a norm than an a rare occurence.
fullhyd.com on 10th Feb 2009, 11:50am | Permalink
Siva, thank you for the observations. fullhyd.com's ratings are more indicative of expected box-office performance than of anything else, since we believe we should be able to tell a majority of our readers if they are likely to enjoy a film, which effectively translates to box-office success. so if a film is likely to appeal to very few people, then it is not always likely to get a high rating on fullhyd.com (though we make exceptions in certain cases).
Siva on 6th Feb 2009, 6:31pm | Permalink
hi dkb, I agree with what you said. Fashion and souryam were hit. Most reviews for these 2 films range from not good to above average. and no reviewer gets it right 100%, but then they are not supposed to. Their job is to analyze the film critically and tell us if its good or bad, not the same as of trade analyst whose only concern is will it make money, i am sure you will agree. and i am not critical of the whole staff of fullhyd.com, they do a gr8 job, which is why I keep returning to this site and now spending time to have a discussion.

But when a reviewer gives similar or higher rating to chintakayala ravi or golmaal returns, then I dont understand how this movie gets a 5.5. whats 5.5 supposed to mean, below average.

From your not rating of the movie I understand that you haven't had a chance to watch the movie yet ( which I appreciate, as one shouldn't criticize unless you watch ). Do watch the movie and tell me if the reviewer did justice :-)

dalindon ka badshah on 4th Feb 2009, 11:06am | Permalink
siva: please - fashion and souryam were both commercial hits and also critically acclaimed, though i don't know about cc2c (though from all reports fullhyd does seem to have overrated the latter). fullhyd gets it right 90% of times, and cc2c must have been one of those one-off things, where they let akshay kumar play with their heads.
Siva on 4th Feb 2009, 4:27am | Permalink
Yet again, an unbelievable review from Deepa. The same reviewer who rates chandini chowk to china, Fashion and souryam higher than this movie. Yes, there are lots of cliches, but honestly, the way the so called cliches are shown is vastly different from say, Fashion. The script is so layered, least I can say is its a haunting movie. Please do yourself a favour and watch the movie.


Pros: script, acting
Cons: slow-paced, but then it is not a thriller

ADVERTISEMENT
This page was tagged for
Luck By Chance hindi movie
Luck By Chance reviews
release date
Farhan Akhtar, Konkona Sen Sharma
theatres list
Follow @fullhyderabad
Follow fullhyd.com on
About Hyderabad
The Hyderabad Community
Improve fullhyd.com
More
Our Other Local Guides
Our other sites
© Copyright 1999-2009 LRR Technologies (Hyderabad), Pvt Ltd. All rights reserved. fullhyd, fullhyderabad, Welcome To The Neighbourhood are trademarks of LRR Technologies (Hyderabad) Pvt Ltd. The textual, graphic, audio and audiovisual material in this site is protected by copyright law. You may not copy, distribute, or use this material except as necessary for your personal, non-commercial use. Any trademarks are the properties of their respective owners. More on Hyderabad, India. Jobs in Hyderabad.