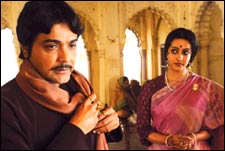 Nupur Barua / fullhyd.com
EDITOR RATING
7.0
Performances
Script
Music/Soundtrack
Visuals
7.0
7.0
7.0
7.0
Suggestions
Can watch again
Yes
Good for kids
No
Good for dates
Yes
Wait to rent it
Yes
Rabindranath Tagore is best understood by the rest of the country in visuals. And Bengali directors have largely done a stupendous job of translating his literature to the silver screen. Subhash Ghai now takes this one step ahead by dubbing Rituparno Ghosh's Nouka Dubi in Hindi, renaming it Kashmakash, and releasing it nationwide. Wise move, you say? Probably, given that Bengali literature at the turn of the 20th century can give any present-day novelist a run for his money.

Set in the early 1920s, the story begins with Ramesh (Jishu Sengupta), a widow-remarriage-propagator and law student, preparing to ask Hemnalini's father (Dhritiman Chatterjee) for his daughter's hand in marriage. Hemnalini (Raima Sen) is an educated, talented young girl, who can embroider and sing - in short, the perfect Bengali woman.

A song and some letters later, Ramesh's father calls him home and obliges him to marry the illiterate daughter of a widow. Giving in to pressure, Ramesh leaves to begin a new life, but a mishap changes and entwines the destinies of 4 people.

Pride, ego, envy, martyrdom, sacrifice, loss, duty, sorrow, pain, and above all, a love that overcomes all obstacles - all these elements are peppered liberally in the plot. Old-fashioned though it may sound, this is the stuff that stories were made of then. A simple love story, Tagore's modern outlook is apparent in some of the issues that we take for granted today. Hem's father does not treat his daughter as some showpiece that he needs to flaunt. In fact, he tells her that she should take as much time as she wants, to mend her broken heart, and not to rush into marriage. Ramesh is portrayed as an atheist, in a time when such non-believers were ostracised.

Rituparno Ghosh is bang-on when it comes to period drama. The sets and the costumes are a delight, and not a single item seems out of place. Gulzar is responsible for the Hindi lyrics, which may not have the same impact as the original, but is flawless anyway. The landscapes of old Bengal, shot in present times, are dreamy and nostalgic.

Raima Sen has the classic cut of a Bengali woman in the 1920s. She does justice to her costume and hair, and is a joy to watch. Jishu Sengupta, with his brooding intensity, much like his south-Indian counterparts, steals the show. Prosenjit Chatterjee has a relatively smaller role, but is impeccable as the Bengali doctor of Kashi. Dhritiman Chatterjee is always a delight in Tagore films. Riya Sen is surprisingly tame, and may be on her way to becoming an actor, finally.

The Hindi dubbing could have been better, especially in the case of Jishu's role. As for the voice that dubbed Riya's character, the less said the better. Maybe the original actors were not available to dub in Hindi, but it would have made a huge difference to the dialogue delivery.

Kudos to Subhash Ghai for his endeavour to bring to the masses what could have remained an 'art' movie, for serious movie-goers.
Share. Save. Connect.
Tweet
KASHMAKASH SNAPSHOT

ADVERTISEMENT
This page was tagged for
Kashmakash hindi movie
Kashmakash reviews
release date
Jishu Sengupta, Raima Sen
theatres list
Follow @fullhyderabad
Follow fullhyd.com on
About Hyderabad
The Hyderabad Community
Improve fullhyd.com
More
Our Other Local Guides
Our other sites
© Copyright 1999-2009 LRR Technologies (Hyderabad), Pvt Ltd. All rights reserved. fullhyd, fullhyderabad, Welcome To The Neighbourhood are trademarks of LRR Technologies (Hyderabad) Pvt Ltd. The textual, graphic, audio and audiovisual material in this site is protected by copyright law. You may not copy, distribute, or use this material except as necessary for your personal, non-commercial use. Any trademarks are the properties of their respective owners. More on Hyderabad, India. Jobs in Hyderabad.