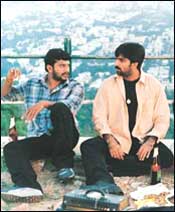 Mithun Verma / fullhyd.com
EDITOR RATING
7.0
Performances
Script
Music/Soundtrack
Visuals
NA
NA
NA
NA
Suggestions
Can watch again
NA
Good for kids
NA
Good for dates
NA
Wait to rent it
NA
Surprise, surprise! When we were all expecting a movie with the quintessentially deep-fried attitude of Ravi Teja and the chronically overused love shtick, Venky comes out as being completely fresh, catching an average cine-goer completely unaware. From simple observation and common sense it's evident that Venky has been made by stitching bits from various sources. No doubt you'd be interested in knowing how I came to this conclusion. I would be interested, too, but we don't have time for such frivolous details.

In the warm streets of Vizag lives the warm-hearted Venky. But his dad (Tanikella Bharani) is proactively hot-blooded about his loafing rambles. Venky generally gives all his nagging a cold shoulder, and does some cool stuff like singing mass numbers with hot actresses (Raasi) and gulping down oceanic levels of iced beer.

From the very first chase sequence itself, the movie shows its true intentions - of not being stopped and being played from the beginning because you have walked in late for it. All the movie does is take us on a ride where we don't know what's up from down when given three chances. The slapstick situations are so comically gawky, all you wonder is where the hell these great comedy scriptwriters have been till now.

Accidentally, Venky and his pals get selected in the physicals being conducted to shortlist candidates for the SI recruitments. Not believing their luck, and not believing how totally whacked the script guys were when they were writing this, Venky and co pack-off to Hyderabad.

In the train, Venky meets Shravani (Sneha). The whole episode of his attempt at impressing her is one of the best in recent times. For instance, Venky commits to Shravani that he is utterly respectful towards elders. Pouncing on his slipup are Bramhanandam and AVS, the elders in the compartment. The whole counters and re-counters in the train will make other attempts at humor we had lately look, well... funny!

The fun in the train is so good that we don't realize that it's time to bring in the twist. Shravani's dad gets clipped in the train. The prime suspects are Venky and his three friends because they had threatened to do that in the sloshed state the night before.

Now Venky and co are on the run. They hide in a safe place - the police academy. They feel that they're fairly safe there, but soon realize that the real evil lies there - Ashutosh Rana speaking Telugu! Ashutosh is not only trying to kill the language, but he's the one that killed Shravani's dad. Please save your whys for the movie.

The totally dopey antics of Ravi Teja and his three friends synchronize perfectly with the whole atmosphere. A light-hearted movie merged unyieldingly into a murder mystery and suspense, this combination can unabashedly boast of having passed the test. Ravi Teja has really learnt from the Mega Star. If you look hard enough and imagine a lot, you can actually see traces of him in Ravi Teja's performance.

Ravi Teja, though dropping his attitude, has not dropped his trademark accent. His earlier forthcoming attitude is seen more in the songs, which, while being massy, are quite good. The choreography and picturization have smoothly blended into them.

Sreenu Vaitla has shown his flair for cool comedy after a while. The only real problem is the lack of his ability to keep up the good work for three full hours. The second half somehow falls back a bit.

On the whole, Venky is a fun movie that can be enjoyed by anyone with the understanding levels of a French fry. Others who're not working for fullhyd.com will also enjoy it!
Share. Save. Connect.
Tweet
VENKY SNAPSHOT

ADVERTISEMENT
This page was tagged for
venky telugu movie review
Venky telugu movie
Venky reviews
release date
Ravi Teja, Bramhanandam
Follow @fullhyderabad
Follow fullhyd.com on
About Hyderabad
The Hyderabad Community
Improve fullhyd.com
More
Our Other Local Guides
Our other sites
© Copyright 1999-2009 LRR Technologies (Hyderabad), Pvt Ltd. All rights reserved. fullhyd, fullhyderabad, Welcome To The Neighbourhood are trademarks of LRR Technologies (Hyderabad) Pvt Ltd. The textual, graphic, audio and audiovisual material in this site is protected by copyright law. You may not copy, distribute, or use this material except as necessary for your personal, non-commercial use. Any trademarks are the properties of their respective owners. More on Hyderabad, India. Jobs in Hyderabad.