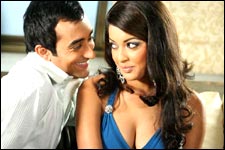 Samrat Sharma / fullhyd.com
EDITOR RATING
5.0
Performances
Script
Music/Soundtrack
Visuals
NA
NA
NA
NA
Suggestions
Can watch again
NA
Good for kids
NA
Good for dates
NA
Wait for OTT
NA
Let’s get this clear: as far as plot goes Raqeeb is not your average innovative thriller at all. Actually, it tries to steal from so many sources at the same time, it is difficult to keep track. No, the adulterous, murderous wife of a poor little rich boy plot is not anything that has been patented by any particular filmmaker, but we have to understand – there are exact plot twists being lifted here.

With that firmly established, let us see whether the film has any merit at all. On its own, probably not, because the only originality it brings to the table is Tanushree Dutta’s highly questionable dress sense. But if you’re willing to neglect the borrowed plot, and the more-than-trite music, you may actually have something here.

That’s because, unlike in producer Raj Kanwar’s earlier ventures, debutante director Anurag Singh does not let his tight grip over the proceedings loosen even for a second. The film is tautly directed, and the foreboding sense of tension is ever relentless. There is a lot of spunk in Singh’s directorial style, one that Kanwar has not been able to achieve. And in his dexterous hands a borrowed and tired plot takes a new life on its own, almost.

Remo (Rahul Khanna) is a serious, introverted kind who also happens to own a software firm. He is great friends with Siddharth (Sharman Joshi), who also happens to work for him. In his attempts to loosen Remo up a bit, Siddharth sets him up with Sophie (Tanushree Dutta). Soon, Remo and Sophie get married, and all seems to be good.

Enter Sunny (Jimmy Shergill). Sunny is the jealous, angry and violent ex-lover of Sophie. After a brief and torrid affair, she convinces him to murder Remo, and make it appear like it is an accident. No, I did not give too much away. You are at least three doubles crosses or betrayals away from the climax at this point.

The thing is, you can probably piece together the whole film yourself now. Actually, up until the time Sunny comes on screen, it still appeared a little different, what with the parent’s car crash angle thrown in (Remo’s and Sophie’s parents were killed in the same car crash, and it appears that Remo’s parents were to blame). But the whole unfaithful wife angle can lead to only so many possible endings, really.

It is this lack of originality and drive that sorely takes away from the film. With such a strong screenplay and tight direction, think what would have happened if the plot was not as predictable as it is? Though, to the screenwriter’s credit, the narrative remains multilayered, and the approach to the twist ending is full of twists on its own.

The taut direction also manages to elicit decent performances from most of the cast. Rahul Khanna may be miscast in a masala film, what with the restrained acting and subtle mannerisms, but he manages to give us all a good show. Sharman Joshi builds on the strengths he has achieved of late, and delivers a knockout performance. Even Jimmy Shergill doing the bad guy turn is great, and he is obviously enjoying himself every bit.

Tanushree Dutta, though… you have no clue what she thought her contribution to the film should have been, but she definitely got off the wrong foot. Despite being popular with a certain film-going section, she behaves like a budget actress, only limiting herself to wearing skimpy outfits and singing songs with aplomb.

Still, the drama and underlying tensions are handled well by the director, and you can’t say Dutta takes away from the film to the extent that it isn’t entertaining any more. And that ultimately is the strongest point – it is entertaining. It may not be original, and hell, you see the twists coming a mile off, but it still manages to help you pass a hot summer evening in the theater sipping cola easily. Go if you have nothing else to watch.
Share. Save. Connect.
Tweet
RAQEEB SNAPSHOT

ADVERTISEMENT
This page was tagged for
raqeeb movie in hindi
raqeeb film review
Raqeeb hindi movie
Raqeeb reviews
release date
Follow @fullhyderabad
Follow fullhyd.com on
About Hyderabad
The Hyderabad Community
Improve fullhyd.com
More
Our Other Local Guides
Our other sites
© Copyright 1999-2009 LRR Technologies (Hyderabad), Pvt Ltd. All rights reserved. fullhyd, fullhyderabad, Welcome To The Neighbourhood are trademarks of LRR Technologies (Hyderabad) Pvt Ltd. The textual, graphic, audio and audiovisual material in this site is protected by copyright law. You may not copy, distribute, or use this material except as necessary for your personal, non-commercial use. Any trademarks are the properties of their respective owners. More on Hyderabad, India. Jobs in Hyderabad.