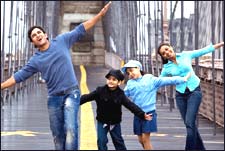 Anshumani Ruddra / fullhyd.com
EDITOR RATING
7.0
Performances
Script
Music/Soundtrack
Visuals
NA
NA
NA
NA
Suggestions
Can watch again
NA
Good for kids
NA
Good for dates
NA
Wait to rent it
NA
I have a friend (let's call him Gumby The Little Green Bear in order to sound discreet about his true identity - and also because it happens to be a rather interesting name for a fictitious character who, err, might be my alter ego). Now Gumby dislikes (because "hate" is too extreme a word for a peace-loving bear) mainstream Bollywood films. He also happens to be crazy about motorsports (F1, NASCAR, monster truck rallies, illegal auto-rickshaw races etc.).

So when a few months back Gumby saw a teaser trailer for Ta Ra Rum Pum he was in a bit of a fix. Here was Saif Ali Khan - long time Bollywood superstar who had recently revealed his hidden acting chops to the world in Omkara - in a movie about sportscar-racing being made under the Yash Raj Films banner (doesn't get more mainstream than that). So with a little bit of hope and tons of trepidation, Gumby went to the theater with me today morning.

We'll come back to what he thought of the film.

Ta Ra Rum Pum (originally titled Ta Ra Rum Pum Pum, with Don't Worry Be Happy as the working title) is a story about Rajveer Singh (Saif Ali Khan), a young tyre-changer in the pit crew of a sportscar team, and Radhika Banerjee (Rani Mukerji), a college student who is majoring in, wait - music, French, Greek Philosophy, mathematics and logic (phew! - this girl has got brains).

They live in New York (like most of Bollywood these days), and Fate brings them together (on a number of occasions, since no one falls in love at first sight in New York City we are told) and also helps Rajveer bump into Harry (Jaaved Jaffrey), an out-of-luck manager of a racecar team "Speeding Saddles" who has become a cabby. This jump-starts RV's (Rajveer's new sobriquet) racing career and his love life.

Zoom a few years into the future, and RV and Radhika are happily married with two adorable kids, have a dog called Bruno, and live in a palatial house made of glass panes. RV is the top dog of the racing circuit, and money is pouring in like (I have run out of similes here, but you get the point) an avalanche of frogs. Life is rosy as the nose of Rudolph the red-nosed reindeer, when disaster strikes.

Rusty, a stern looking caricature of a German race car driver who means business, crashes RV's car in a race. RV is out for a year recuperating from the injuries, but something more crucial than his bones has been broken in the crash - his confidence.

Memories of the crash slow him down on the race track, and he loses one race after another, eventually getting fired from the racing team and also losing a close friend in Harry along the way.

RV and Radhika's affluent lifestyle slowly catches up with their dipping bank balance. They move to a rundown Indian neighbourhood in downtown New York and desperately search for work. The burden of telling the truth to their children weighs down on them, and they make up a story about being in a reality television show where they have to live as poor people.

And thus begins a journey - the struggles of a family to stay together, of a man in search of his confidence and pride, the indomitable human spirit at work. Oh, and then there are the noblest of all men - the New York City cabbies.

Hollywood would have made a crisp 90 minutes drama about a racecar driver down on his luck and form, trying to get back to the top of his game. It would have bombed spectacularly at the box office. But this is not Hollywood - no siree, this is unapologetically Bollywood, where we know that an "Indian sports movie" is an oxymoron and the audiences like nothing more than 150+ minutes of unadulterated masala. And Ta Ra Rum Pum delivers just that.

Slick cinematography, opulent settings, chart-topping music, loads of tears, superficial emotions and wafer-thin plot-lines are reinforced with some crackling racing-car action and crashes. And, of course, there is the always dependable Jaaved Jaffrey whose mere presence lightens up the screen.

Director Siddharth Anand makes up for a slow first half, by an emotionally charged second half where the lead actors finally get to do some acting. The animated title song (with a family of bears, no less) is used lovingly in a fantasy sequence and engages the child in all of us.

Gumby, as expected, is disappointed. He understands that the medium of film exists to help us soar over the mundane nature of everyday life for a few hours. He also understands that mainstream Indian cinema wants to reflect the aspirations of a growing middle class (both in India and abroad). But he can't help but cringe about the lack of depth and motive in character development, and the feeble storylines, in our movies.

As a motorsports fan he is also appalled by the portrayal of racecar drivers. Yes, their competitiveness leads to many crashes, but they also know that life is short in the fast lane, and respect the safety of others and themselves. They are neither homicidal nor vindictive.

He loved the children and the animated bears, though.
Share. Save. Connect.
Tweet
TA RA RUM PUM SNAPSHOT

ADVERTISEMENT
This page was tagged for
Tara Rum Pum full movie download filmyzilla
ta ra rum pum filmyZilla
Tara Rum Pum Full Movie download filmyzilla
TA RARA PAM
ta ra rum punch full movie download filmyzilla
Follow @fullhyderabad
Follow fullhyd.com on
About Hyderabad
The Hyderabad Community
Improve fullhyd.com
More
Our Other Local Guides
Our other sites
© Copyright 1999-2009 LRR Technologies (Hyderabad), Pvt Ltd. All rights reserved. fullhyd, fullhyderabad, Welcome To The Neighbourhood are trademarks of LRR Technologies (Hyderabad) Pvt Ltd. The textual, graphic, audio and audiovisual material in this site is protected by copyright law. You may not copy, distribute, or use this material except as necessary for your personal, non-commercial use. Any trademarks are the properties of their respective owners. More on Hyderabad, India. Jobs in Hyderabad.