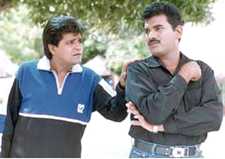 Arpan Panicker / fullhyd.com
EDITOR RATING
1.0
Performances
Script
Music/Soundtrack
Visuals
NA
NA
NA
NA
Suggestions
Can watch again
NA
Good for kids
NA
Good for dates
NA
Wait to rent it
NA
Frame one of Bejawada Police Station starts off with an analytical comparison between two legal cases. The first shows two youth who loot a busload of passengers and burn the bus, killing 25, getting away with a life sentence. And the other shows a man who's stolen two and a half biscuits hounded by the cops, beaten up and jailed for six months. Jayalalitha figures in the analysis that follows! Wow! Like, profound!

In case you are interested in this prelude, watch it and walk out during the titles. What follows is a dismal attempt at offering a solution to the loopholes in the law. This so-called solution only points out the loopholes in the movie in the areas of common sense, aesthetics, direction and music. We shall refrain from discussing ephemeral topics like acting and editing.

The flick starts off showing Ranga (Keshav), the dashing circle inspector of Bejawada Police Station who fights crime and arrests criminals with a vengeance, constantly frustrated by legal loopholes. He however finds time to sing duets with Shilpa (Shilpa Sivanand), daughter of a Zilla Parishad Chairman. Later, a search for some chain snatchers leads to the Chairman's house, and the next day, jumping to a conclusion, he tells the press that the guy is involved in some hanky-panky. Result, the Chairman jumps to his own conclusion, and Ranga is suspended/fired/disgraced.

Dismal acting, action sequences that draw your attention to the gaps between fist and jaw, and songs that keep appearing like pop-ups on the net - this is one police station you need to keep your distance from. If you have already watched it and want to file an FIR against the director, please stand in queue!
Share. Save. Connect.
Tweet
BEJAWADA POLICE STATION SNAPSHOT

ADVERTISEMENT
This page was tagged for
Bejawada Police Station telugu movie
Bejawada Police Station reviews
release date
Keshav, Brahmaji
theatres list
Follow @fullhyderabad
Follow fullhyd.com on
About Hyderabad
The Hyderabad Community
Improve fullhyd.com
More
Our Other Local Guides
Our other sites
© Copyright 1999-2009 LRR Technologies (Hyderabad), Pvt Ltd. All rights reserved. fullhyd, fullhyderabad, Welcome To The Neighbourhood are trademarks of LRR Technologies (Hyderabad) Pvt Ltd. The textual, graphic, audio and audiovisual material in this site is protected by copyright law. You may not copy, distribute, or use this material except as necessary for your personal, non-commercial use. Any trademarks are the properties of their respective owners. More on Hyderabad, India. Jobs in Hyderabad.