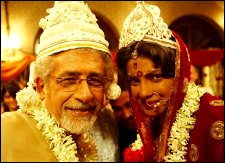 Kakoli Mukherjee / fullhyd.com
EDITOR RATING
4.5
Performances
Script
Music/Soundtrack
Visuals
6.0
5.0
6.0
8.0
Suggestions
Can watch again
No
Good for kids
No
Good for dates
No
Wait to rent it
Yes
Anyone who's grown up on Ruskin Bond stories will recognise the tell-tale signs of his creation as 7 Khoon Maaf builds its pace - Anglo-Indian generals, candle-lit Victorian interiors and rustic churches. Vishal Bharadwaj, with ample help from his art directors, is no doubt a master in metamorphosing a writer's mental rantings into visual extravagance, as has been evident in his earlier films.

In 7 Khoon Maaf, he builds each scene like a stage-act, breathes life into fictional figures and provides background music building into crescendos, but somewhere in between conceptualizing elaborate frames, he misses pulling the strings and using the scissors to make it compact. Somewhere, the utter predictability of the whole affair gets on you as you wait for the 7th husband, and are left rueing that it was this husband of his promiscuous heroine who had deserved the maximum screen-time.

Forever doing the wrong things to set life right for herself, Susanna Anna Marie Johannes (Priyanka Chopra) never gives up as she walks down the aisle 7 times in succession. Orphaned at childhood and protected by a loyal bunch of servants, Susanna (Saheb for her servants) even manages to evoke your pity as one wrong man after another plagues her life.

But whether it is the chauvinistic Edwin Rodriques (Neil Nitin Mukesh), the drug-addict rockstar Jimmy (John Abraham), the poet-cum-pervert-in-bed Wasimullah Khan (Irrfan Khan), the already married Russian spy Nikolai Vronsky (Alexsandr Dyachenko), the pussywhipped police officer Keemat Lal (Annu Kapoor), or the philosophical doctor Madhusudan Tarafdar (Naseeruddin Shah), Susanna ensures that she calls the shots (and fires them, too) everytime. The only bright and good spot in her life is Arun (Vivaan Shah), a servant boy who she educates to be a doctor, and it is this boy who narrates the story of Saheb, who he reveres as his childhood crush and benefactor.

Though repelled by Saheb and her killing spree, Arun's dogged loyalty to his patron compels him to return to her again and again, and it is this track that is left a tad untended to by Bharadwaj. It would have helped if he had focused more on Susanna's dynamics with characters apart from her husbands.

Also, this is not a film that a regular cine-goer going for a dose of entertainment might appreciate. It is far removed from anything candyfloss and jubilant, and the dragging pace of the movie can test the patience of a viewer who does not give a hoot about deciphering layered characters.

The most complex of the lot is no doubt Susanna, and Chopra does a good job essaying her. She is a poetic muse, a passionate lover in bed and a grim murderer by turns, and each time, she comes off looking real. But sometimes, when you see the men getting drawn to Susanna's irrestible sensuality like insects to a flame, you wish that there were a Vidya Balan (who had oozed sensuality so deftly through her eyes in Ishqiya) or another actress of the same mould doing her part, as Chopra fails to work up that fatal charm.

The husbands, each in their limited space, do good, though John tends to get annoying as the head-shaking and kilt-wearing rockstar.

Vivaan Shah is brilliant as the mute observer and narrator, and shows promise in his debut film. Usha Uthup plays her part well. The other actors playing the loyal servants (especially Harish Khanna) put up good performances, too. Konkona Sen Sharma is adequate, and Ruskin Bond, in a cameo, is adorable.

The cinematography by Ranjan Palit, which perhaps is the second lead character in the movie, creates shadows, silhouettes and dim-lit pictures expertly, and effectively conveys the old-world charm of the story.

The music by Vishal Bharadwaj, with that addictive "Darling" number, is good, and blends into the mood of the film.

In all, 7 Khoon Maaf, with its unconventional storyline and treatment, might not be lapped up by the traditional audience, but if anyone wants to revel in cinema of a different league, it's a welcome change.

ADVERTISEMENT
This page was tagged for
7 khoon maaf full movie
7 Khoon Maaf hindi movie
7 Khoon Maaf reviews
release date
Priyanka Chopra, Neil Nitin Mukesh
Follow @fullhyderabad
Follow fullhyd.com on
About Hyderabad
The Hyderabad Community
Improve fullhyd.com
More
Our Other Local Guides
Our other sites
© Copyright 1999-2009 LRR Technologies (Hyderabad), Pvt Ltd. All rights reserved. fullhyd, fullhyderabad, Welcome To The Neighbourhood are trademarks of LRR Technologies (Hyderabad) Pvt Ltd. The textual, graphic, audio and audiovisual material in this site is protected by copyright law. You may not copy, distribute, or use this material except as necessary for your personal, non-commercial use. Any trademarks are the properties of their respective owners. More on Hyderabad, India. Jobs in Hyderabad.