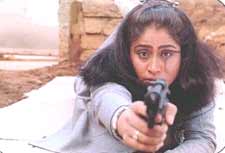 Smriti Kashyap / fullhyd.com
EDITOR RATING
3.0
Performances
Script
Music/Soundtrack
Visuals
NA
NA
NA
NA
Suggestions
Can watch again
NA
Good for kids
NA
Good for dates
NA
Wait to rent it
NA
The name spells terror! Psychos yelp and druglords squeal! The tigress that tames lions, the woman who put the thunder in Thums Up and the action queen whose path even gravel fears to tread is back, and she's bigger and better than before! And this time she's here to mash the world of terrorism! Wilier than Carlos, craftier than the colony fox, the chokri who can make any chora bawl... ladies and gentlemen, in this corner, megacop Vijayashanti!!!

Only, 2-1/2 hours later, it's the end of another assembly line chor-police story. The chors are still up to it, but you in the other corner is a different matter altogether. And why? Well, here's the tale. Vijayashanti is an honest cop whose brother falls victim to some fancy hypnotism by Ashish Vidyarthi, a terrorist mastermind. The brother tries to bump her off, but fails and gets bumped off himself in this sibling-eat-sibling world. And now she's hot on the heels of this terrorist guy.

Due to an old-fashioned director's usual filmi twists, she finds herself suspended, and then uses this time effectively to put together a ragtag team of guys, with whose help we gather she'll kick ass. And then the whole training and songs session later, she finds herself being helped out by another honest cop, Yashwant. This dude looks like the result of an 'MGR-NTR instant mix' pack. This leather bound, makeup sloshed, drunken guy tries to look cool with no avail, but he can still help her fight the terrorists. Yeah, like we needed some lard bound moron to infuse machismo in the script... Hell, no! In Vijayshanti we trust.

The film ends on a high note - terrorist eliminated, the world secured, and the reviewers all revved up for their critiques. Technically this movie is a fun film... corny, but great fun. The tough cop, female Rambo stuff is played to the hilt by Vijayshanti. It's good to see her running around and bringing the evil guys to boot, especially when you are a woman yourself. She does all her stunts herself, which is a terrific thing for vicarious kicks. There's this cool part where she's jumping across a jeep and the camera has a shot of her leaping through the air with an expression that can only be described as that of a determined tree frog out to get justice. She's pretty chubby, and the parts where she's running make her come across like a jackfruit with legs. Otherwise she's great.

There are couple of engaging action scenes like this one where she's being chased by the cops as she has kidnapped those ragtag heroes of hers. We see that she has every conceivable weapon known to man on board the army truck she's driving, short of a submarine and a couple of missile launchers. Heck, what's a little weaponry amongst friends?

On the brighter side, we're saved some corny dialogues, as the stars are too busy giving each other knuckle sandwiches. And this when she-woman is not shooting bullets from her self-loading and never quiet revolver. This movie has to also have the highest number of leg amputees ever recorded in the history of celluloid. I don't know about you, but I was unnerved by the fact that so many bullets were punched into those guys' legs.

Girish Karnad has a brief but profound role to play. The Rhodes scholar that he is, he gets to mouth 5 whole lines in the film. Ashish Vidyarthi's Hindi is dubbed, can you beat that?

In sum, if you really are in the mood for some heavy duty patriotism, want to see jeeps being blown all over the place - from here to kingdom come - and want to witness a rather juvenile director's childhood fantasy being enacted, then this film is right up your alley. Otherwise, just go and ogle VS who now seems to be occupying 73mm of the 75 mm screen.

ADVERTISEMENT
This page was tagged for
Vandemataram telugu movie
Vandemataram reviews
release date
Vijayashanti, Ravi Teja
theatres list
Follow @fullhyderabad
Follow fullhyd.com on
About Hyderabad
The Hyderabad Community
Improve fullhyd.com
More
Our Other Local Guides
Our other sites
© Copyright 1999-2009 LRR Technologies (Hyderabad), Pvt Ltd. All rights reserved. fullhyd, fullhyderabad, Welcome To The Neighbourhood are trademarks of LRR Technologies (Hyderabad) Pvt Ltd. The textual, graphic, audio and audiovisual material in this site is protected by copyright law. You may not copy, distribute, or use this material except as necessary for your personal, non-commercial use. Any trademarks are the properties of their respective owners. More on Hyderabad, India. Jobs in Hyderabad.