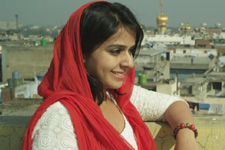 Not possible, you say? Let us begin at the beginning then. Maulik (Anuuj Saxena) wakes up from the aftershock of a nightmare, in a room without electricity. He then proceeds to go through an album that has sepia-tinted photographs - but wait, this is no period drama, and neither are the characters from a previous era, nor are the flashbacks that old. So, Maulik is therefore a disillusioned man, and we are then introduced to Naina (Neha Pawar), who sits with her mother (Mohinder Gujral) and reminisces about the good old days (not so old, actually).

In flashback mode, then, the actual story is revealed. Naina makes and sells paranthas. When she has an altercation with a girl whose theatre group is making a little too much noise on the neighbouring terrace, it is the theatre team leader Maulik (which means "Anmol") who intervenes and apologises to Naina.

Turns out that Maulik and his troupe perform on the streets and are looking for a break. They rehearse their stuff diligently, but have no shows. Naina offers to introduce Maulik to Saluja (Vijayant Kohli), who manages festivals, and Maulik is offered a slot to perform in. However, things do not go as planned.

In the meantime, Naina has managed to submit to the inevitable - falling in love. She never gets a chance to tell Maulik, however, because their world is turned upside down and the latter goes into depression.

Now it is up to Naina, her mother, and Maulik's friends (Himanshu Thakkar, Yuvraj Haral and Prabhakar Srinet) to get the idealistic man back on his feet, literally. Maulik, however, knows that the audience wants "item numbers", and is not confident that his issue-based plays have a place in the real world.

One presumes that the idea of the story was to bring to light the fate of independent theatre groups in the capital. Maulik knows he has a niche product, and Naina is convinced that there are others like him who will appreciate it. As a concept, this works wonderfully on paper, but executing it is another ball game altogether.

For starters, the longish screenplay is peppered with redundant scenes that have no bearing on the story (for example, the scene of the argument between Danish and his wife, or that of Naina and the shopgirl). Maybe the intention was comic relief, but the humour in the movie is virtually non-existent. In fact, the dialogues (also redundant and repetitive) lack wit and gravity, and seem forced.

The actors do not help at all. Anuuj Saxena slurs his way through the movie. He looks best when he is silent and smiles. He has not shaken his television acting methods, and does not do justice to the character of Maulik, who is intense and classy (or so we are told).

Neha Pawar screeches and yells, and cannot maintain the high maintenance act that she puts on. She looks neither cute nor appealing, and the chemistry between the lead pair is definitely missing.

Mohinder Gujral does her bit, as does Vijayant Kohli, but their subscribed dialogues prevent them making the impact they would have otherwise. The other actors are forgettable.

As is the music - forgettable, that is. What stands out in the movie, however, is the production design. Supported by clever cinematography, this is a Delhi that you have not seen on screen earlier. The editing could have been more efficient, though.

Paranthe Wali Gali will give you a headache - at best, it will make you restless. The movie seems to be going nowhere for the longest time, and the issues discussed are dealt with in the most trivial manner. It is never easy to be above mediocre, as Maulik clearly is, but the script makes you wonder what the problem is. With so many other releases this weekend, this is one movie that you may want to skip, for now.
Share. Save. Connect.
Tweet
PARANTHE WALI GALI SNAPSHOT 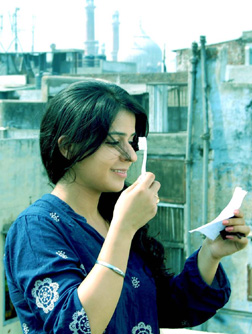 ADVERTISEMENT
This page was tagged for
Paranthe Wali Gali hindi movie
Paranthe Wali Gali reviews
release date
Anuuj Saxena, Neha Pawar
theatres list
Follow @fullhyderabad
Follow fullhyd.com on
About Hyderabad
The Hyderabad Community
Improve fullhyd.com
More
Our Other Local Guides
Our other sites
© Copyright 1999-2009 LRR Technologies (Hyderabad), Pvt Ltd. All rights reserved. fullhyd, fullhyderabad, Welcome To The Neighbourhood are trademarks of LRR Technologies (Hyderabad) Pvt Ltd. The textual, graphic, audio and audiovisual material in this site is protected by copyright law. You may not copy, distribute, or use this material except as necessary for your personal, non-commercial use. Any trademarks are the properties of their respective owners. More on Hyderabad, India. Jobs in Hyderabad.