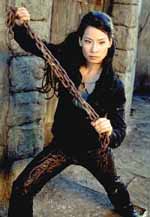 EDITOR RATING
3.0
Performances
Script
Music/Soundtrack
Visuals
NA
NA
NA
NA
Suggestions
Can watch again
NA
Good for kids
NA
Good for dates
NA
Wait for OTT
NA
"Another old TV Show movie," remarks a guy, while watching a movie in flight, in the opening sequence of this chic flick. He might have as well be saying that about the movie he's starring in. However much that remark spoke for the movie's lack of pretensions, it didn't say a word of how badly it lacked any effort at making sense, whatsoever. Proof that it is an adaptation of a small screen concept comes from the feeling of watching a patch up of a number of episodes. Heck, it isn't even that, it's just like watching an MTV video, and we all know how much sense they make. Now, is it just a coincidence that McG is a music video director?

We'll come back to the music video bit after presenting an outline of the plot. A perpetually hibernating millionaire finds three girls who can't fit in to the police academy even if they tried to. Can't blame the academy, and the millionaire isn't a genius - he's just got common sense, which the three don't. These three now work for him, which shows that the millionaire has slipped in to senility. All this is what we are supposed to know.

Now, we have a soon-to-be-billionaire techie, Knox, who's devised this voice identification software. The techie is kidnapped, and the software knocked off. Angels to the rescue, and some innocuous prancing later Knox is back, but the software isn't. So the Angels have a crack at making sense of some technology, which would make any self-respecting software professional scream in anguish before giving up his job, and may be life. You see, a mainframe with the best of security provisions is unraveled by some really, really cheesy maneuvers, of which only the Arabian dance and Spanish serenade are comprehensible.

Just as everything is about to fall into place, we come to know that the bad guy is not the one we thought. As usual, it is the most unlikely guy around. This is what we are not supposed to know, but most of us would.

All this happens at a speed that doesn't allow you to figure out anything that's gone by, and doesn't even have you looking forward to what's coming up. Add to this some really loud music in the background, and the music video of the day is complete. A latex mask with such music and a high-security chamber may give you visions of MI:2 (which also happens to be inspired by a TV series), but the comparison is the same as one between John Woo and McG.

And the director must have had some really strong doubts about the emoting prowess of the three star visages. Only that can explain the more than equal footage given to the trio's derrieres.

Actually, one agrees with McG on this one. The three angels may as well be named dumb, dumber and dumbest. You figure out which one's which. One hint: Natalie (played by Diaz) looks dumber than the Farelly brothers' Mary.

As for the hi-flying stunts, which leave the guns out (Barrymore is against gun use, while the bombs are just fine), remind us of the ones in Romeo Must Die. For all the slick work, they are as entertaining as the reverse jumps in some of our own, really tacky movies of old. This just goes to show that technology and knowing how to use it is not sufficient to be an action choreographer. It's better left to the masters like John Woo.

All Feminists out there should definitely avoid this one, if the movement is to continue. And the only faithful patrons of this movie would be the lascivious, who can just go ahead and have their eyes popping out at those gyrating butts and buttonless shirts.
Share. Save. Connect.
Tweet
CHARLIES ANGELS (TELUGU) SNAPSHOT

ADVERTISEMENT
This page was tagged for
Charlie's Angels full movie download in Telugu
charlie's angels movie telugu
Charles angels telugu dubbed movies
Charlie's Angels movie series download in telugu
charlies angels telugu dubbed movie
Follow @fullhyderabad
Follow fullhyd.com on
About Hyderabad
The Hyderabad Community
Improve fullhyd.com
More
Our Other Local Guides
Our other sites
© Copyright 1999-2009 LRR Technologies (Hyderabad), Pvt Ltd. All rights reserved. fullhyd, fullhyderabad, Welcome To The Neighbourhood are trademarks of LRR Technologies (Hyderabad) Pvt Ltd. The textual, graphic, audio and audiovisual material in this site is protected by copyright law. You may not copy, distribute, or use this material except as necessary for your personal, non-commercial use. Any trademarks are the properties of their respective owners. More on Hyderabad, India. Jobs in Hyderabad.